Recently we took you through every single driver to win a round in the history of top-level rallycross in the United States.

From the discipline’s debut at the tail-end of the 2010 Rally America season, right the way through to present day Nitro Rallycross, 19 drivers have shared the 85 event wins between them.

Now it’s time to run through the cars. Those 19 drivers have pedaled 11 different cars to victory between them – here is every single one of them:

There are seven cars with one win, starting with Topi Heikkinen in the Saab 9-3 in the third and final round of the 2010 Rally America rallycross mini-series. Heikkinen’s win was the first non-Ford win in US rallycross, and would be the only one for eight months until Liam Doran secured a popular win on the streets of Los Angeles at the X Games in his Hansen Motorsport-developed Citroën C4.

X Games in LA was the site of the next one-time winning car as Hansen Motorsport and Citroën Racing joined forces to take on the best of the US with a purpose-built DS3 with Sébastien Loeb behind the wheel.

The aim of the game was to pit Loeb head-to-head with fellow Red Bull athlete Travis Pastrana as part of a promotional effort for the energy drinks brand. At the next Global Rallycross event, Pastrana was the winner in a Dodge Dart in Loudon. It was the brand’s only ever win.

In Munich, an X Games event and GRC series round at the start of 2013, Doran won once again, this time in a Prodrive-developed Mini Countryman. He nearly doubled up the next day, eventually finishing second.

The following season, Subaru finally took its first rallycross win, with three-time European champion Sverre Isachsen claiming a popular victory at DirtFish in the Subaru Impreza WRX STI hatch. The car was retired at the end of that year, with Subaru having to wait until 2019 to return to the top of the podium with its replacement.

Finally, Honda joined the rallycross winners club in one of US rallycross’ all-time great races in Louisville, Kentucky in 2017. Working alongside multiple race and title-winners (and former Ford partner) Olsbergs MSE, Honda debuted in 2016. Five podiums shared between Joni Wiman and Sebastian Eriksson represented a decent return for the car’s first campaign and a championship challenge was expected in 2017.

Ultimately Eriksson’s win proved to be the Honda Civic Coupe’s only race win, but OMSE has continued to develop it since its final US start, and has run it in both World RX and RallyX Nordic to varying levels of success. The car will return to US shores next week in Nitro Rallycross.

A familiar and successful car in Europe, the Peugeot 208 hasn’t been a permanent fixture in US competition, but when it has raced, it’s won.

A year later it was brother Kevin’s turn, dominating the same event at his first attempt to beat Subaru’s Patrik Sandell to the win. It was a win that came as Hansen Motorsport was in the midst of a fierce title fight in World Rallycross, using the very same chassis it brought over to America. Timmy Hansen of course went on to win that world title with Kevin finishing third.

Hyundai’s Veloster, like the WRX STI, was a hugely popular car among fans. Also like the Subaru, it took a while for Rhys Millen’s eponymous team to find the car’s sweet spot.

That came as GRC debuted at Daytona in the summer of 2014. Earlier in the week the team had been testing extensively, working on new upgrades, and by the time the race weekend rolled along, Millen and the Veloster were at the sharp end of the times. Even a spectacular, fiery engine failure in the heats couldn’t derail Millen’s win hopes.

An overnight change was followed by a semifinal win, then a dominant final victory. Points would later be stripped because sensors used in that testing remained on the car illegally, even though they weren’t active, but the victory stood regardless.

Another win followed two rounds later in the second LA race, but right at the peak of its powers, Hyundai quit rallycross, instead opting to spend its marketing money elsewhere.

While the Veloster made a few cameo appearances in 2015 and ‘16, without factory backing, it never won again.

It took Subaru a while to get the WRX STI working right, but when it did, it was almost unstoppable.

Aero worked out, engine program on point, Subaru went into the 2019 Americas Rallycross season with high expectations. The team duly delivered, with Scott Speed, Chris Atkinson, and Sandell giving the team three wins from three early in the season.

A reprieve for Volkswagen, and a strong display from Kevin Hansen in his Peugeot at Nitro RX meant that by the end of summer Subaru had gone from winning every event, to half of its races, and while injury for Speed ended his title hopes, Atkinson and Sandell continued to carry the baton.

A season finale win for Atkinson represents the most recent victory for the team – and Subaru has continued to develop in the time since. Expect the car’s victory haul to grow later this year.

For our European readers, yes, this car is a Polo. In the US, where the little Polo isn’t sold, the car raced as a ‘Volkswagen GTI’ for much of the 2014 season.

The Marklund Motorsport-built machine was very much a stop-gap, running in place of the Beetle while it was developed. However, for a second-hand car that wasn’t really supposed to stick around, it didn’t do too badly.

Speed won on its debut, going back-to-back at the following round at X Games in Austin. Tanner Foust made it three wins from four rounds by emerging from New York victorious, but then there were a tough two rounds for the car – Speed’s fifth place at Charlotte being the car’s best result in that time.

As the series moved onto LA, Foust had moved over to the debuting Beetle, while Speed has switched into the Polo, ahem, GTI that Foust had been driving. He added another win in LA, which helped him enter the Las Vegas season finale with a shot at the title.

Speed’s Beetle was ready in time for that title decider however, and the battered old GTI never got its shot at full-season glory. Still, not a bad return for a stand-in.

It may look the same, but M-Sport’s Fiesta effort was rather different to the car from continental Europe (more on that below). An evolution of the rallying firm’s popular R5 rally car rather than a ground-up rallycross car, the Fiesta was mighty fast.

Ken Block ran the car exclusively for its first two seasons, notching up three wins across 2013-14. In 2015 Chip Ganassi Racing and Bryan Herta Rallysport ran a further four cars between them; from then on the car became the dominant Beetle’s closest challenger.

Block won another three races in 2015, while Arpin took the same number across 2016 and 2017, pushing the Volkswagens to the final round in the title fight in the latter year. In his final rallycross start to-date, Brian Deegan also won in the 2016 season finale, joining Sandell as the only driver to win in both types of Fiesta.

After being sidelined in favor of the rather disappointing Focus RS RX in 2018, the M-Sport Fiesta returned in 2019, albeit with running gear from a Ford Focus, and was once again a rapid machine.

One of two different cars representing the Fiesta hatchback on this list, Olsbergs MSE’s variant was a mainstay from the first races in 2010, right the way through to 2016.

The Swedish Fiesta went through a few different evolutions, from five-door to three-door, a facelift, and ST badging, but was ultimately the same machine, improved year-upon-year.

It won the first two rallycross races in the US in the hands of Foust, won all but one race again in 2011, and all but two in 2012. The car’s final title came in 2013. Then wildcard driver Speed won the season opener in an older OMSE Fiesta, before Heikkinen set a record with five consecutive wins mid-season.

As rival teams finally caught up with OMSE’s tremendous advantage, the car visited victory lane less and less in the following years. A sole win for Sandell came in 2014 while a winless but consistent Joni Wiman took the title.

Three wins followed in 2015 with Eriksson, Nelson Piquet Jr (in a rented satellite car) and Wiman all scoring victories.

As Olsbergs switched its allegiance to Honda for 2016, just one OMSE Fiesta remained – the SH Racing Rallycross entry formerly of Piquet, now driven by Jeff Ward. He couldn’t add to the car’s impressive hall and it disappeared from the field at the end of that season.

We’ve already covered the illustrious history of the Volkswagen Andretti Beetle in great detail on DirtFish. US rallycross’ most successful car has notched up a staggering 29 victories across GRX, X Games, and ARX.

Originally developed by Seat Sport, the Beetle debuted with a 1.6-liter engine at the end of 2014. The smaller engine was chosen to give the car a weight break. It was a decision that proved to not entirely be worth it, because by the start of the following season Volkswagen had fallen into line with everyone else by going for a 2.0L unit.

Early season wins at X Games for Speed and at Daytona for Foust gave an early glimpse of the promise the car had, and by the time the circus moved to LA in September, the car was unstoppable. From the first LA race (round eight of 12) in 2015 right the way through to the end of the 2018 season, the Beetle only missed out on victory seven times – that included a clean sweep of the four-round 2018 season too.

A brace of victories and a fifth straight title in 2019 rounded out an incredible five-and-a-half year spell for the Beetle. 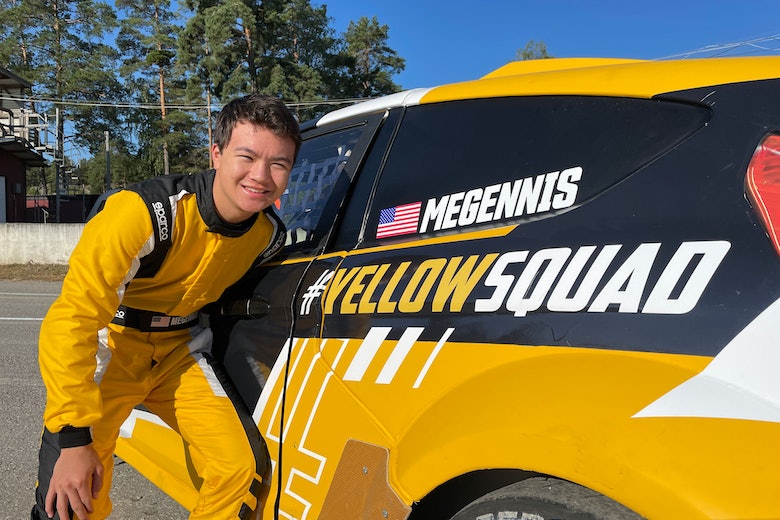 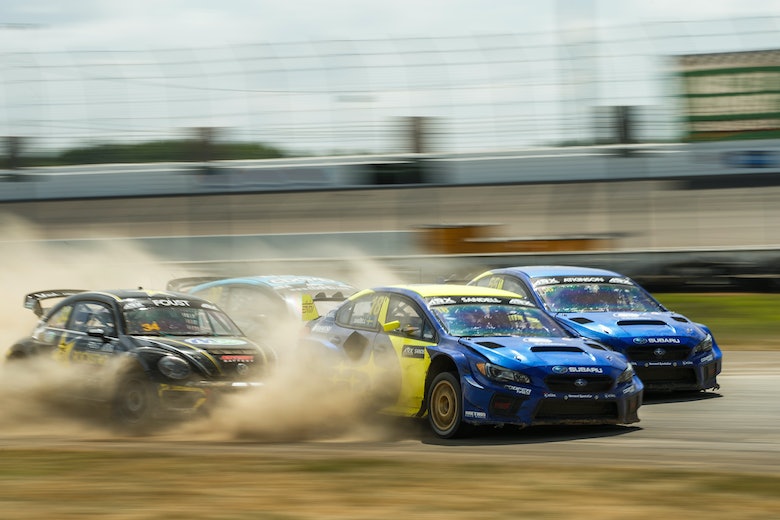 How a rallying icon became a rallycross superpower 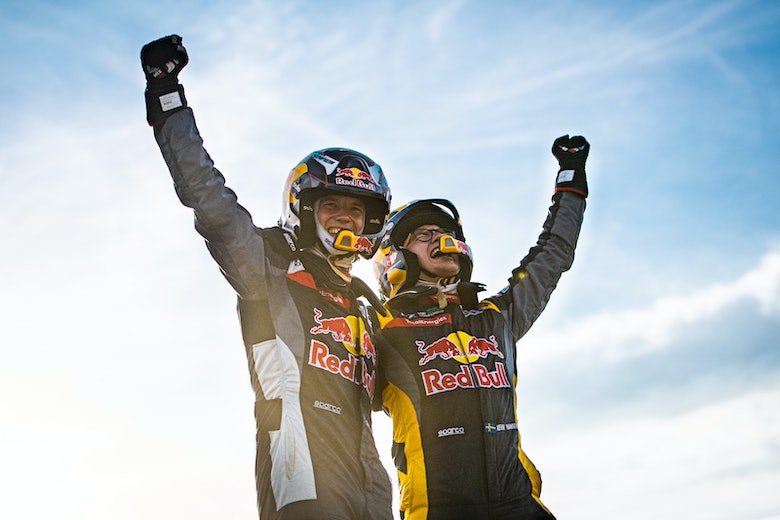 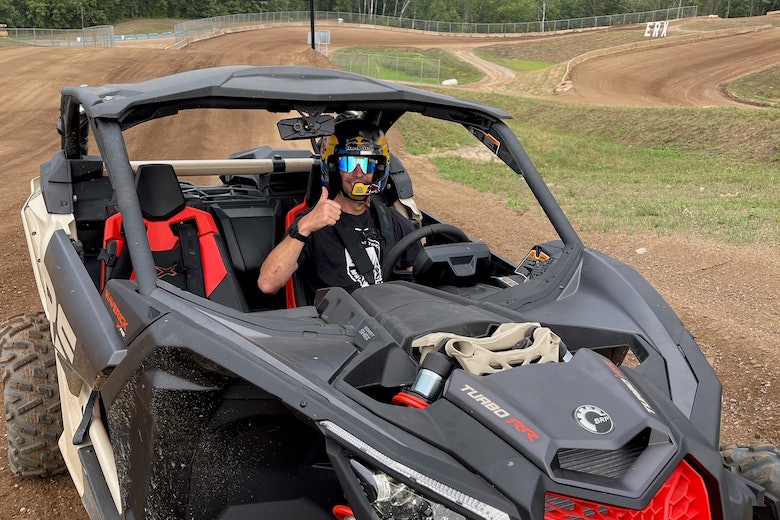