Rallycross in the United States has been around for over a decade now, with 85 full top-level events being contested across various officially sanctioned competitions since 2010.

Across those events, no fewer than 19 drivers have found victory lane, and here at DirtFish we’ve put together a comprehensive list of every single one of them.

If the United States had a ‘Mr. Rallycross’, it’d be Tanner Foust. Hailing from drifting (where he was a two-time Formula Drift champion) and stage rally, Foust was America’s first rallycross superstar, arriving in the discipline right as it got big Stateside.

Winner of the first RallyCar Rallycross Championship competition in 2010, Foust went on to claim the first two Global Rallycross titles in 2011 and 2012 driving a factory supported Olsbergs Ford Fiesta. He was the first American to win a rallycross event in Europe during that time, too.

After a winless 2013 (besides a gold medal at the Gymkhana event at the X Games), Foust moved to Volkswagen to lead the manufacturer’s then-new program with Andretti Autosport.

The first year of the partnership was a building year, firstly with the Polo, then a 1.6-liter Beetle. Once the Beetle’s 2.0 engine was introduced, Foust returned to title-challenging ways, finishing second behind team-mate Scott Speed in 2015, ’16, ’17, and ’18.

Volkswagen reducing its involvement for 2019 didn’t slow down Foust, who took two wins and a record-equalling fourth US rallycross title in Americas Rallycross that year.

Scott Speed initially came to rallycross as part of the ‘Star Car’ initiative which would’ve had a different big-name driver enter as a wildcard in each GRC event in 2013.

The ex-Formula 1 and then-NASCAR driver had never driven off-road before his rallycross debut, but that was to be of little hindrance. Speed won his debut at X Games Brazil, and ended up seeing out the season, winning again in Charlotte.

A stellar first campaign earned Speed a call-up to Volkswagen’s new factory effort for 2014. It was more of the same with a win at the start of the season in Barbados and two more in Austin and Los Angeles.

After narrowly missing out on a title in his first year with Volkswagen, a full switch to the Beetle the following season would cement him in rallycross folklore. Speed was unstoppable between 2015-18, taking an unprecedented four championships in a row. 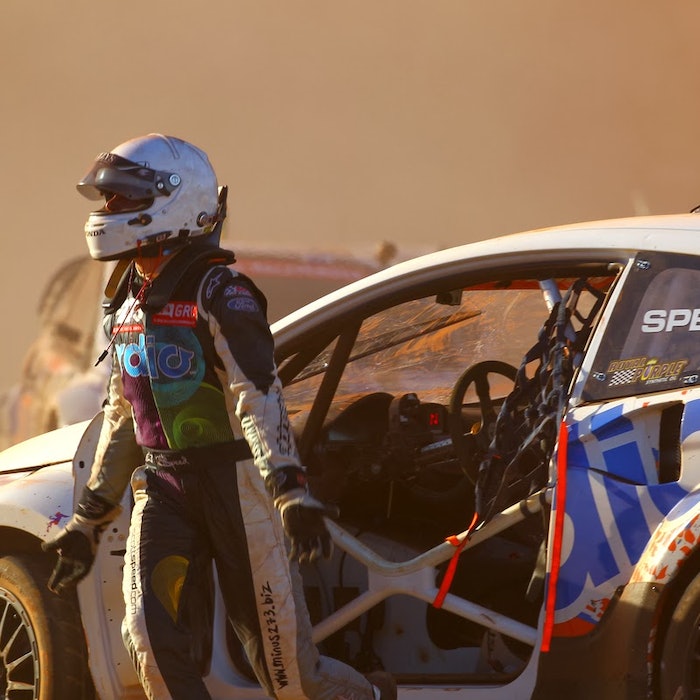 Having forged a circuit racing path in Europe which led him all the way to Formula One, a return to the States gave Scott Speed his much sought-after career boost in rallycross

A move to Subaru, which had hit its stride just as Speed joined, looked to be the perfect step towards a fifth crown, until a season-ending injury sustained at the Nitro World Games halted that charge.

Still, 19 overall event wins and a record-equalling four titles, not bad for a circuit racer, eh?

Topi Heikkinen’s time in US rallycross will be remembered for two things: his frightening accident at the X Games in Los Angeles in 2012, and for coming back and absolutely wiping the floor with everyone a year later.

The hard fighting Finn dominated the 2013 Global Rallycross season, ending Tanner Foust’s stranglehold on the discipline on this side of the Atlantic, while also ensuring Ford’s domination remained in place for another year.

After an early season victory at the X Games in Munich (which was an official GRC round), Heikkinen went on to score five consecutive wins – it’s a record that remains to this day.

He never returned to defend his title, the allure of fighting for a world championship proving too much of a temptation in 2014, although he did return for a one-off at the X Games in Austin where he finished 16th.

Ken Block is one of the most recognizable names not just in US rallycross, but all of world motorsport, but it took him a little while to get his first win on the board.

After a fleeting appearance at the 2011 Global Rallycross season finale, he ran a full campaign in 2012 taking one podium finish on his way to fifth in the points. He finally broke his victory duck at the ‘13 season finale in Las Vegas, repeating the feat a year later – a season in which he also won at The Dirt Track at Charlotte.

While the 2014 season resulted in his best points position – second – the 2015 season was arguably his best. Three wins, including back-to-back victories in Detroit doubled his wins tally from before that season, and with only two finishes off the podium in the first half of the year, Block was right in the title hunt.

However, an upturn in form for Volkswagen Andretti Rallycross, and a (literal) overturn for Block in Barbados ended his title hopes.

After finishing seventh, Block and Hoonigan turned their attention to World RX, but he was back for a partial campaign in ARX in 2018. It was a winless season, but he did finish on the podium in two out of the three races he contested. Most recently Block took sixth in the 2019 Nitro Rallycross competition.

Marcus Grönholm was easily the man to beat in the early days of rallycross in the United States.

He won the first two Global Rallycross events at Irwindale in 2011 and took a further victory at Pikes Peak later in the year. If it wasn’t for him missing the two rounds at the venue that would become DirtFish Rally School, it would’ve been a rather straightforward title for the two-time World Rally Champion.

He picked up pretty much where he left off in 2012, winning at Charlottle and Texas to take an early points lead, but a horror shunt with a concrete barrier at X Games in los Angeles not only ended his season, but his full-time rallycross career too.

Nevertheless, in just eight starts, Grönholm won five times, giving him a 62.5% win percentage – second best of anyone to ever compete US-sanctioned rallycross.

After winning the 2006 Junior World Rally Championship, Patrik Sandell switched codes to race in rallycross just as the discipline was taking off in the US.

He quickly established himself as a front-running driver and took his maiden win driving for Olsbergs MSE in Washington DC in 2014.

A move to Bryan Herta’s team for 2015 put him behind the wheel of the ultra-fast M-Sport Ford Fiesta ST, and two further wins followed that year and in ’16. Solid championship challenges looked to be on the cards then too, only for rotten luck to derail him each time. 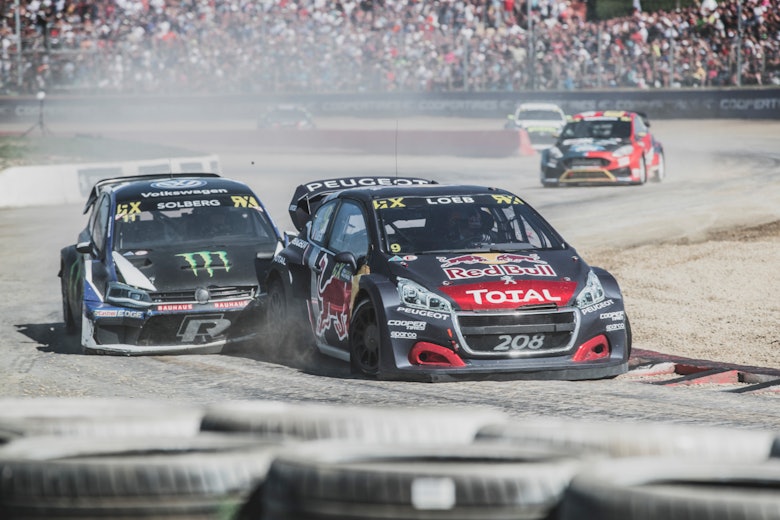 The best rallying to rallycross converts

A move to the emerging Subaru team for 2017 gave him the high-profile position he deserved, but with the program still building, he’d have to wait until 2019 to win (and mount a championship challenge) once again. He ended that year third in ARX, 13 points off first, while he also finished second in Nitro Rallycross at the Nitro World Games, top of the US regulars.

One of North America’s most accomplished dirt racers, Steve Arpin left NASCAR behind to join the US’s rallycross revolution towards the middle of last decade.

Despite not having the factory backing of his closest rivals, Arpin has been a title challenger for much of his career – particularly in 2017 when he ran Volkswagen duo Foust and Speed right down to the wire in Los Angeles.

Overall Arpin has 19 podiums and three big wins at Daytona, on home soil in Ottawa, and Thompson, CT, and he remains a key figure in rallycross to this day.

No fewer than five drivers have won twice in the various top-level rallycross competitions in the United States, and it’s quite the club.

Liam Doran well and truly arrived on the scene when he won gold at X Games Los Angeles’s first race in 2011 in his family run Citroën C4. His second win came two years later at another X Games event, this time closer to home in Munich, driving the Mini.

Rhys Millen was the second driver in this entry to notch up two wins. After overcoming a spectacular engine failure to win the first-ever rallycross race at Daytona, he followed that up with a home win in LA. He and his Hyundai Veloster had finally come good, then Hyundai pulled the plug in order to spend its marketing dollars elsewhere. Millen, while one of the highest-rated drivers to race in rallycross Stateside, would remain a two-time winner.

Sebastian Eriksson took the mantle of team leader at Olsbergs MSE in 2015 and won at Daytona in a year where he finished second in the points, splitting the Volkswagen duo of Speed and Foust. He didn’t win in ‘16, as OMSE embarked on a building year with Honda, but gave the Japanese marque its first top-level rallycross win a year later in Louisville, a race that is regarded as one of the most spectacular in the short history of American rallycross.

Brian Deegan’s two wins came further apart than any other two on this list, taking his first victory in the 2011 season finale driving an Olsbergs Ford Fiesta. He spent three more years with the Swedish team, racking up a bucketload of podium finishes in that time, but the winners circle evaded him until the 2016 season when, now driving an M-Sport Fiesta for Chip Ganassi, he won on his final rallycross start to-date in Los Angeles.

Former WRC driver Chris Atkinson has been instrumental in Subaru’s return to form in rallycross, and his commitment to the cause was rewarded in 2019 with a brace of victories in at Gateway and Mid-Ohio. That year proved to be his best to-date – with team-mate Speed sidelined through injury, he took on the de facto lead role at Subaru, and finished second in the points behind Foust.

Seven drivers have won once in US rallycross’ various premier competitions, and really is one heck of a list.

First up there’s Sébastien Loeb, statistically – in percentage terms – the greatest driver in US rallycross history. That’s right, Loeb may have only entered one event, X Games in 2012, but he won it, giving him a 100% win record.

Travis Pastrana’s sole win isn’t a true reflection of his rallycross talents. A part-timer for much of his rallycross career so far, his only win came in the Dodge Dart, a car that had no business winning races, at Loudon in 2012. These days he’s leading the charge in Nitro Rallycross, and with the latest and greatest Subaru WRX STI – arguably the best rallycross car in the world right now – underneath him, it’s only a matter of time before he adds to his tally.

Before Subaru’s rallycross operation became the powerhouse it is today, three-time European champion Sverre Isachsen gave the manufacturer its first, and for quite some time only, win right here at DirtFish. With the Impreza hatch sidelined after 2014, save for a couple of appearances in 2015, Isachsen didn’t win again as Subaru embarked on the long and arduous process of developing the latest WRX STI.

Nelson Piquet was actually one of the most impressive drivers during his short spell in Global Rallycross. Lumbered with rented equipment that wasn’t on par with his rivals, Piquet twice managed to make it to the final round with a shot at the title. Only the one event win though, coming in Washington DC in 2015.

Joni Wiman is probably the most unusual entry in this part of the list. The 2013 GRC Lites champion won the 2014 title at the top-level too, despite going winless all year. It wasn’t until the 2015 finale, Olsbergs’ last event before it introduced the Honda Civic Coupe, that he would finally win.

Finally, the Hansen brothers only have a combined three starts between them, Timmy contesting Nitro Rallycross in 2018 and ‘19 and Kevin just the latter, but both have ensured that the family has an unbeaten record at the Nitro World Games contest. Timmy held off Mattias Ekström to win the inaugural contest in 2018, while Kevin Hansen bettered a charging Patrik Sandell to prevail a year later.

Prodrive to be featured at Goodwood Festival of Speed