As Fraser McConnell has risen through the rallycross ranks over the last few years, winning the ARX2 title in 2019 and claiming podiums in RX2 and RallyX Nordic, we’ve often talked about how he’ll be a star of the future.

Well, the future is now, because as the Nordic season got underway in Nysum, Denmark last weekend, so too did McConnell’s win tally at the highest level of the discipline.

This first Supercar victory was no walk in the park for the popular Jamaican either, as he had to fend off none other than three-time World Rallycross Champion Johan Kristoffersson for victory.

Starting towards the back of the pack for the first final of the weekend, McConnell had a perfect view as the field piled into the first couple of corners, and it was that perspective that allowed him to spot a gap that would allow him to sneak through to the lead.

“There was going to be some form of chaos – I remember Andreas [Eriksson, Olsbergs MSE team boss] telling me [to] take advantage of their mistakes because that’s the only real way to get an advantage at this kind of level.

“Everyone is so fast, and everyone put together a fast lap, but it’s when someone makes those mistakes is when the gaps start to become present. And there, I saw an opportunity, I took it and was able to lead the whole way through with some proper pace and bring it home.”

McConnell left it late to joker, an opposing strategy to Kristoffersson who opted for the longer route on the second lap of the five-lap final. That could’ve undone his push for the win, but with Kristoffersson having to carve his way through traffic while McConnell ran unopposed up front in the final stages of the race, the scene was set for a popular and long-awaited maiden Supercar win.

“That’s the best feeling in the world in the final, when you go through the joker lap and you come out to see no dust, you see fresh air, and no cars in front of you, that’s the dream,” he said.

“I just kept telling myself no pressure, no pressure, keep calm, a couple of corners away, just kept it mistake free and screamed at the top of my lungs when I passed the finish line.”

McConnell’s race win drew smiles all around the paddock, but 5,000 miles away at home in Jamaica the country was jubilant, with everyone from the Prime Minister to Usain Bolt congratulating him.

“It’s been a crazy two days,” he said. “Everyone back home is so proud and I’m so privileged and honored to be able to make them proud.

“I’m racing for the best country in the world and they’re so invested in anything that one of their fellow Jamaicans are doing. I had my friend Usain Bolt reposting it, the Prime Minister reposted it, some people in the music industry reposted it.

“There’s not so much sports going on in the world and not so much sports with Jamaicans representing, so for me to be up there racing against some of the best in the world and performing at the top, it gives them so much pride and so much energy that just me winning makes them feel like they’re winning. That’s enough for me, I can leave without a trophy knowing that I’ve made them proud.”

He did leave with a trophy – two in fact – after he followed up his Saturday win with third place on Sunday. The result was second on the road ahead of Sondre Evjen, but the positions were reversed post-race due to contact.

There were no hard feelings between the pair though, who complete the top-three of the RallyX Nordic standings behind Kristoffersson with the first two of seven rounds now in the books. 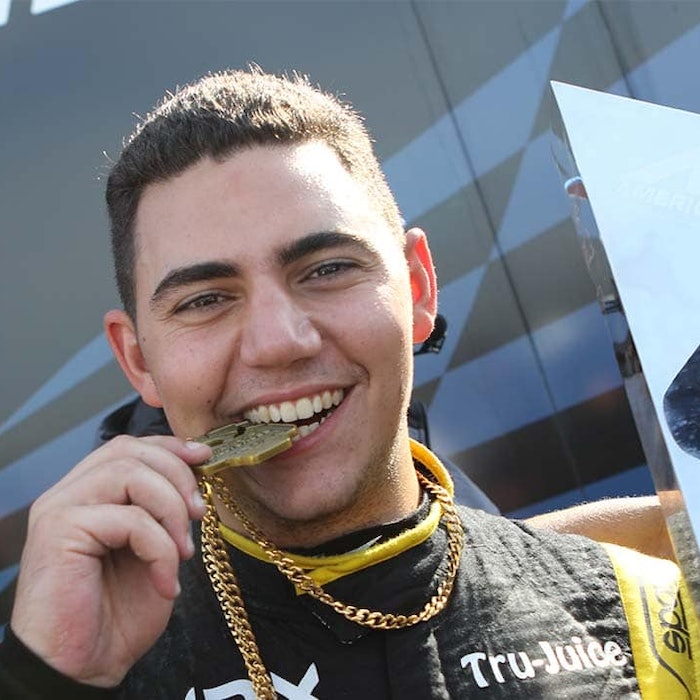 I'm always open to learning and figuring out ways to be better. Once I stay on that path of continuous progression, then sky's the limit Fraser McConnell

“Everyone stepped up their game again, the second day is always people figuring out little tricks round the track and extracting those tenths off each corner,” McConnell said of the second half of the double-header weekend.

“When I came out of the joker [in the final] I saw Sondre, was really close. I had a little more pace and tried to go on his inside but he braked a lot earlier than I expected – it was pretty dusty so it was hard for me or him to see where the braking zone was – and before I could pull out in time we had a little small contact that the stewards ended up reversing.

“But I would go for that gap 10 times out of 10, because like a famous man once said, if a gap is there and you don’t go for it, why are you even on the track?” he added in reference to Ayrton Senna. “That’s the mentality I’ve taught myself to live by.

“I went up to Sondre after, and me and him are cool. He even said: “I would have done the same thing.” So no hard feelings, just respectful hard racing.”

Looking ahead, with a first top-level race win now in the books, McConnell has his sights set on the bigger picture.

“I’ve proved to myself that we can win races and we can rack up some nice championship points,” he said. “It would be a waste of my time to not have my eyes on first.

“It would be silly of me not to have my sights on the title because we know we have the pace and the team is at such a professional level that that’s what we’re aiming for. Like at least.”

But despite having his eyes on the big prize in rallycross’s most prominent regional series, McConnell insists his apprenticeship is far from over, admitting that “everything is a work in progress”.

“Even though I’ve learned so much about myself and my driving throughout these last two days, I’m always open to learning and figuring out ways to be better and just never being complacent.

“Once I stay on that path of continuous progression, then sky’s the limit.”

McConnell is competing in a full slate of RallyX Nordic events this year, remaining in Sweden with OMSE and the Eriksson family until the summer. From there attention will turn to Nitro Rallycross where he will campaign his Fiesta across the United States as part of a four-car OMSE lineup in the new series.

You can keep up with McConnell’s 2021 season right here on DirtFish.