George Megennis continued his fine start to his rallycross career with a maiden win at Nitro Rallycross’ season-opening weekend in Utah and will be a hot tip to do the same again this weekend.

Competing in the NRX Next development category, Megennis was up against a host of European and American talents looking to make a name in rallycross.

It was only the teenager’s second race weekend in the discipline, having made his debut in Sweden over the summer, but he looked anything but a rookie as he survived the demanding Utah Motorsports Campus to dominate the second final of the weekend on Saturday. 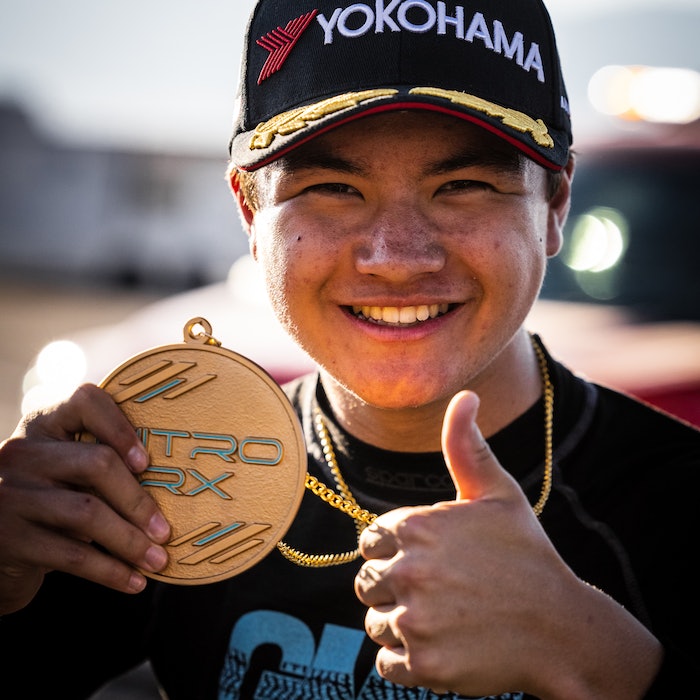 “I got a decent start, Enlund got a good start, but he’s on my outside,” Megennis explained to DirtFish. “So there’s a little bit of contact going into one, but I managed to pull it off and then I just hold the lead and hold back Enlund for the first four laps.”

But soon Megennis had the measure of his rival, and went on to take a comfortable maiden win of the season, with Enlund – who didn’t make perfect use of the joker – slipping back as the race entered its final couple of laps.

Unlike the Supercar runners which have one championship round spread over the course of the weekend, NRX Next runs two championship rounds per event, meaning that there’s plenty a driver can learn and adapt to from day-to-day – something Megennis used to his advantage after a tricky first day for everyone as they got to grips with the demanding Utah course.

“After the Friday I learned so much about how the track would evolve because I did a track walk in the morning and then I also went back out after all the racing was done for the day.,” he said.

“I learned a lot from doing a lot of track walks. I think I walked the track like six or seven times over the weekend and the other big thing I go over is onboards from the day. So I’ll watch every single session a couple of times over starting from practice, going all the way to the last lap, the final, just to see as well, how it progresses throughout the day.”

One disadvantage Megennis might have is a lack of a team-mate in the same class, but such a problem is negated by the fact his YellowSquad team is run by the Hansen family; the same family that has gone unbeaten at Supercar level since Nitro Rallycross debuted in 2018.

“It actually made it a lot easier, because I don’t have a Lites team-mate but it was a lot of fun to work with them because we’d go over Supercar onboard and Lites car onboard together,” Megennis explained. 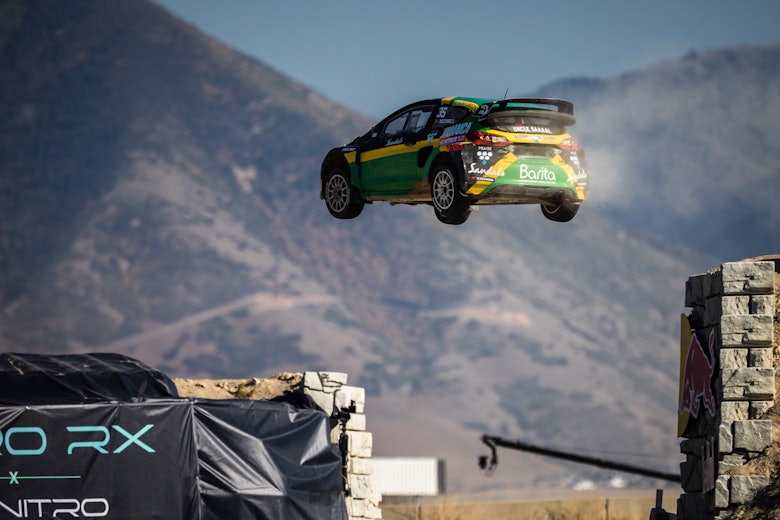 “And then when I’d come in, because the Next sessions were typically before Supercar, I would come in and they’d both immediately come over to me and be like, ‘OK, how’s the track? Where is it damp? Where is it bad? Where is it good? Where can I push? Where has anything changed?’ So it was fun to work with them in that sense.

“Kenneth as well, Kenneth was a huge help. There’s a few things like I had no experience jumping a car. There was a lot there. There’s a lot of like, ‘OK, you have to do this here. Like just pin it and see how it goes.

“It was a lot of that kind of thing. And having more experience in jumping you just kind of get more of a feel for it so that they helped explain it to me.

“They were a lot of help, especially in the banked corners because I’ve never experienced anything like that in karting. Not like how you lean into it and slide around the entire thing. It’s very unique to Nitro, and they’ve done it for a couple of years now, so they can give me a lot of help there.”

While the Hansens certainly helped on the ground, Megennis has a strategy for adapting and learning before a race weekend too.

“I try and do a lot of practicing on iRacing with that and on the sim, where I would just go different tracks, try different cars to try as many different combinations as possible, just so I can learn a track,” he said.

“I have two laps, I think that does help quite a lot, just from having to drive a track and have one sighting lap and then go for a flyer.

“I’ve done that quite a lot, both because it’s a lot of fun and it’s good training for driving and rallycross because the majority of the tracks I’ve never driven on, and especially coming into this year, I did it a lot more because no-one’s seen these next four rounds. No-one knows the track, so I hope that’ll come to my advantage and even more so.”

Looking ahead to this weekend at ERX Motor Park, Megennis will have to put that adaptability to the test once again – but so will his mentors, with it being the first ever NRX event to take place away from the Utah Motorsports Campus.

“All the Hansens and I will be in the same boat,” he said. “We’re going to go for a bunch of track walks, [and] going to have to do a lot of theory work on it.

“And then of course we’re just going to have to get out there and wheel on the Friday. I think it’ll make it more fair throughout the Lites field, which in this case actually works to my disadvantage, but of course fairer racing is going to be better racing.”

One thing Megennis is confident of, however, is that ERX Motor Park’s regular use as an off-road racing facility will make it easier on NRX Next’s Lites cars than the brutal Utah track.

“I know they they’re good at maintaining tracks. I know the dirt is going to be quite thick, but it won’t be as easily rutted up. Especially because the track will also be set in already because they’ve had trucks and UTVs running on it.

Breen wins SS5 to close in on Tänak’s rally lead