One driver atop the season standings, another atop the qualifying results. At the end of Saturday the Hansens had everything, but just 24 hours later, their Nitro Rallycross season had been turned upside down.

Timmy Hansen had slipped down to third in the points, while Kevin Hansen was knocked out of the title fight entirely after a controversial coming together with Liam Doran in a last chance qualifier duel.

Coming into this first full Nitro RX season, the Hansens were the team to beat with two wins from two in the Nitro World Games rallycross contests in 2018 and 2019. They kept that unbeaten run going through round one of 2021 too, with another Timmy victory in Utah.

Even when Subaru’s winning streak began at round two in Minneapolis, the silverware continued to pour in, with at least one of the brothers appearing on the podium alongside Scott Speed and Travis Pastrana at ERX and Wild Horse Pass. But at Glen Helen Raceway in Southern California, Subaru turned up the heat, locking out the podium while Timmy’s damage limitation drive to fifth was the best the Peugeot pair could muster.

Kevin’s Saturday was sublime, there’s no question about that. Beating all three Subarus in the battle bracket is obviously impressive, but when you consider just how good those three were come Sunday, it highlights just how strong the younger brother was on that first day.

The recent format change meaning that one heat winner gets an automatic spot in the final meant that Kevin couldn’t afford to slip up in his first Sunday race. But he was bettered by Speed off the start, and then to add insult to injury, the other Kevin – Eriksson – also got by, delivering on the pace he’s been threatening all season.

No bother, Hansen could still get a final berth by getting a top-two result in the semifinals, but a fast-starting Robin Larsson and Andreas Bakkerud left him languishing in one of the two LCQs.

Post-race, Doran was hit with a five-second penalty that cost him his win and subsequent spot in the main event, but it was to be of little benefit to a tearful Kevin Hansen Dominik Wilde

There he engaged in a thrilling battle with Doran. It was a fair fight, with the duo exchanging the lead on multiple occasions; but on lap three of that contest, both slid into the first hairpin, scrambling for grip on the newly watered track. The result was door-to-door contact, which was followed by both sliding into the wall.

Doran came off better, hitting the wall less hard and winning the race, while Hansen’s brush with the concrete took him out of contention on the spot.

Post-race, Doran was hit with a five-second penalty that cost him his win and subsequent spot in the main event, but it was to be of little benefit to a tearful Hansen who’d gone from being the star of Saturday to completely out of a championship fight in the space of a few short hours.

Timmy also had a rough ride. A round two defeat in qualifying at the hands of Fraser McConnell left him facing an uphill battle on Sunday. 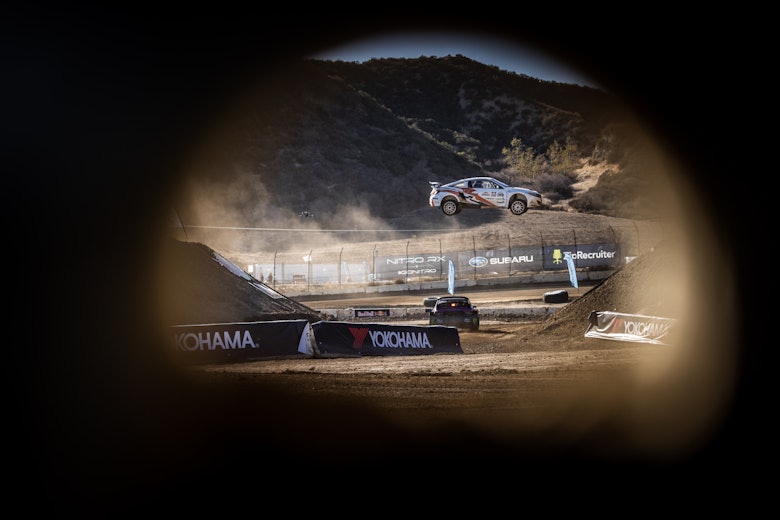 He too had to scramble into the final via the LCQ. Beaten by brother Kevin at the heat stage, an early joker failing to pay off in Timmy’s semi, he was able to at least win his LCQ in convincing fashion.

In the final though, he once again jokered early, and while he was able to rally back to a solid points finish slap bang in the middle of the pack, he had no answer to the formation flying Subarus.

It would be easy to argue that the Peugeot 208s simply didn’t have an answer to the pace of the Subaru, but looking at the qualifying results proves that’s simply not the case.

Instead, Team Hansen’s performance in California is the perfect case study of how you need to make the most of your opportunities, and how Nitro RX’s knock-out format can catch out even the best if something doesn’t go as planned for a split second.

Kevin put himself in the best possible starting position for race day, but being bettered of the launch in his first heat left him susceptible, whereas Timmy was already in the position his brother would find himself in as a result of his early exit on Saturday.

Meanwhile at the head of the field Subaru, whose drivers have been pretty evenly matched with the two Peugeots all year long, maintained consistency throughout Sunday, nailing its starts and then clearing out, ridding itself of the need to battle through the pack.

But all is not lost. Timmy – who initially wasn’t even supposed to be doing a full season – remains in title contention, and with the track at The Florida International Rally & Motorsport Park expected to contain more asphalt than any of the other tracks from this season, championship leader Pastrana has admitted he’s up against it.

That leaves the door open for Timmy (and Speed, of course) to potentially grab the upper hand.

The Hansen team’s season changed in the blink of an eye last weekend, but with one round remaining, it could just as easily swing the complete other way in Florida.

Monza could’ve been “end of my career” – Suninen