Kevin Hansen claimed top spot in qualifying for the second round of Nitro Rallycross at ERX Motor Park in Minnesota as Subaru opted to play the strategy game in an usual head-to-head final.

The 2019 Nitro RX event winner began the final of the bracket alongside fellow semifinal victor Scott Speed, but the Subaru driver did not leave the grid when the lights went out, handing an easy win to Hansen.

Speed’s tactical call means he and Pastrana will line up in separate heats on Sunday.

Hansen qualified for the final after an intense battle with Travis Pastrana at the semifinal stage. Hansen made the stronger start, but Pastrana’s use of the alternate line meant he was able to keep on the Peugeot driver’s tail.

When Hansen took his joker on lap two of three, Pastrana took the lead – having taken the compulsory longer lap on his first tour. With jokers out of the way, that set up a door-banging final lap, on which the lead changed hands multiple times. Hansen eventually prevailed, moving back to the fore at the final corner.

In the other semi, Speed ultimately had an easy win, but it did not always look as though that would be the case.

Steve Arpin had a fantastic launch, but Speed’s starting position on the inside line proved advantageous in helping him maintain the lead.

With both drivers having taken the joker by the end of lap two, it was set to be another intense final-lap decider until Arpin took the jump after Turn 1 on the right side, a higher line that had caught a number of drivers out throughout the day.

He landed the jump on the nose of his Hyundai, completely destroying the front-right corner of the car and ending his race instantly.

The first round of the battles was attritional, with half of the races ending with one car on the sidelines.

The second round went better, with Pastrana beating Robbin Larsson. After a close start he ended up winning comfortably.

In the second round two battle there was plenty of controversy as Fraser McConnell took the lead from Hansen with an aggressive pass up the inside of Turn 2.

While he kept the lead for the duration of the race, Hansen suffering from a left-rear puncture as a result of minor contact before the turn, the stewards deemed McConnell’s pass to be too aggressive. He had five seconds added to his race time, which was enough to promote Hansen to the win.

Utah winner Timmy Hansen faced off against Arpin in the third round two battle, with Hyundai driver Arpin pulling off an upset to win after making the most of contrasting lines through Turn 2 to edge ahead after his opponent made the better start. 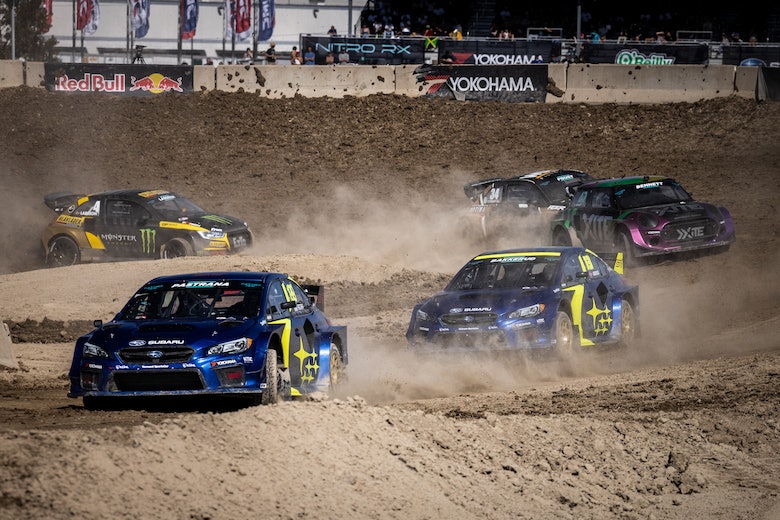 How Nitro RX has tweaked its format for round two

And in the final round two match up, Liam Doran lost out to Speed after leading early on. Speed’s cleaner driving style, in contrast to Doran’s more dramatic style, proved to be what he needed to get by the British driver once the jokers had been completed.

Ahead of the battles, Pastrana secured the top solo qualifying time, with the battle bracket pairings and order being decided by second practice times after rain necessitated a delay and the cancellation of the dedicated qualifying session.

Pastrana’s pacesetting 54.726s lap time also gave him a bye through the first round of the brackets, with an odd number of cars competing in the premier class this weekend.

Timmy Hansen was second fastest, a mere 0.016s off Pastrana, while Speed made it two Subarus in the top-three, ahead of Kevin Eriksson and Kevin Hansen.

Oliver Eriksson was sixth fastest, despite a moment where he nearly rolled the car after over-cooking an exit of a sweeping left-handed and was then tagged by the lapping Pastrana.

Oliver Bennett was classified 15th after failing to complete a lap – his right rear suspension arm breaking on his first lap in the session.

In round three of Nitro RX Next, Martin Enlund (pictured above) led from lights to flag, comfortably beating Casper Jansson for his first win of the season.

The pair went into the first corner side-by-side but a left-rear suspension failure left Karam lacking control, and speed. The incident was compounded by further contact from Megennis on Karam as he tried to pass into Turn 2.

That messy first corner left Jansson as Enlund’s main challenger for the win, but while he was closing in on the top spot midway through the race a tag on the wall as Jansson took the joker on lap three allowed Enlund to extend his lead.

When Enlund took his joker on the final lap, he too tagged the concrete barrier on the exit but had done enough to hold on to the win by 1.195s.

After his strong pace was undone by battles with damage earlier in the day, John Holtger took third on his rallycross debut. He claimed the final podium spot after a fine pass on Lance Vacala on the opening lap.

Vacala eventually finished fourth, ahead of the wounded Megennis, who did manage to beat Eric Gordon. Karam’s lap-one failure left him as the only non-finisher.

In the first of two Side-by-Side exhibition finals, Kyle Chaney overcame a half-spin on the opening lap to overhaul Tanner Foust for the victory.

Polesitter Foust made the better getaway, and on the exit of Turn 2 Chaney got sideways, blocking the road temporarily before making a quick recovery.

While that afforded Foust some breathing room out in front, Chaney quickly hunted him down and by the time Foust jokered at the midway point, there was nothing to choose between them.

With Chaney now in clear air, waiting until the last of six laps to joker, he was able to pull out more time over Foust, who settled for second.

Behind them, Carlson and Brian Deegan had a close fight for the final podium spot, with Carlson edging it after a late pass, taking third by under half a second.

Scottie Lawrence took fifth ahead of Catie Munnings, who climbed from the back of the 10-car grid. Corry Weller was the final finisher, with Andy Ives, Jack Letourneau and Jason Luburgh all failing to make the end of the race.

Like Foust and Carlson, Travis Pastrana is also pulling double-duty in Supercars and SxSs but did not feature in the final after crashing earlier in the day.

A 60mph hit with a concrete barrier left him nursing a minor shoulder injury, but it was not serious enough to end his weekend.

Ogier gets fine and penalty for repeat of helmet-strap breach