Fraser McConnell was the undisputed star of the fourth round of this year’s Nitro Rallycross championship as he claimed his maiden Group E win at Glen Helen Raceway.

The Dreyer & Reinbold JC driver’s weekend got off to a strong start after he took top qualifier spot on Saturday, winning his seeding heat before besting Oliver Bennett, Kevin Eriksson and Oliver Eriksson in the head-to-heads.

He carried that momentum into Sunday with a comfortable win in the second first-round heat, ensuring a pole position start for the final. There, he had the unfavorable inside line going into turn one, but held off a fast-starting Robin Larsson to earn an early lead.

McConnell’s win was all but secured not only when he emerged front he joker on the final lap still in first, but when Larsson and Bakkerud came together behind him just after the merge. Larsson got by to take his third-straight second place finish, while Bakkerud held on for third to ensure a second podium lockout from four races for DRR JC prepared cars.

Behind the podium scrap, Oliver Bennett was best of the rest, taking the best result of his Nitro RX career in fourth. He got the spot late on after the Olsbergs MSE pairing of Kevin and Oliver Eriksson came together at the final turn on the final lap. They would finish fifth and sixth respectively, the top six being covered by a mere 3.178 seconds.

Conner Martell was the final finisher in what turned out to be a seven-car final, having to contend with only having four-wheel-drive in two of his car’s three gears.

His Vermont SportsCar team-mate Travis Pastrana, the defending Glen Helen event winner, failed to capitalize on a certain final spot after not making it to the grid for the last chance qualifier.

It was a weekend to forget for the reigning champion who, despite topping timed practice and winning his seeding heat on Saturday, fell at the first hurdle in the battle bracket, then spun in his opening heat on Sunday and had a brush with a wall in his semifinal which necessitated a lengthy repair and his missing of the grid deadline for the LCQ.

It would have been a certain main event appearance however, with the field reduced to eight cars total after Jenson Button, the ninth and final entry in Group E this weekend, withdrew before racing commenced after a shunt during a Friday practice session which left him lacking the track time he deemed necessary to compete.

In NRX Next, George Megennis and Casper Jansson shared the spoils – Megennis taking a dominant Saturday win with heat victory, then a comfortable lights-to-flag drive in the final as 2021 champion Jansson spun. 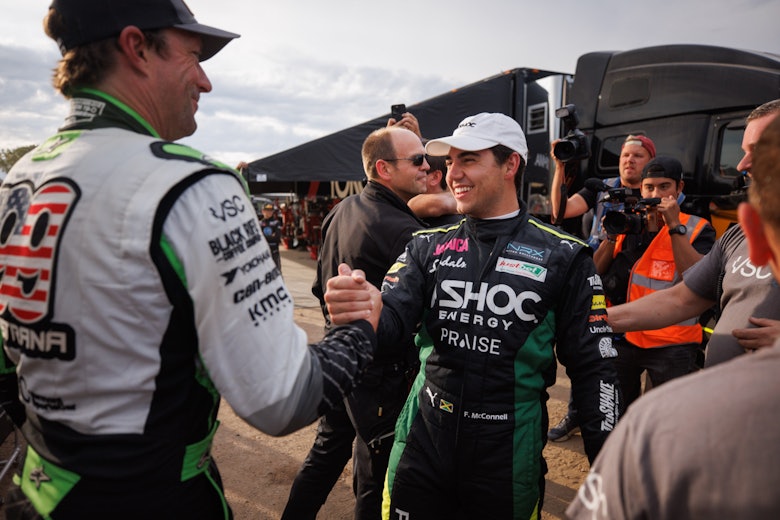 What McConnell bounced back from to win

On Sunday the roles were reversed, with Megennis jokering early and Jansson building up a big enough gap in the meantime to snatch victory.

While his Group E run didn’t yield any hardware, Pastrana was able to win the second Side-by-Side final of the weekend, resisting a race-long charge from Gregoire Michaud.

It could have been two for two for Pastrana but he missed out to Brian Deegan on Saturday after a drag race to the checkered flag in which Deegan prevailed by just 0.034s.

That battle looked set to resume on Sunday – the pair inseparable through the first three corners of the final until Deegan rolled out. Subsequent rollcage damage prevented him from restarting, ending his hopes of an SxS double.