It’s obviously no secret that Travis Pastrana is unique, but when it comes to motorsport very few find themselves in the position that he is in, as a front-line competitor of the series he’s the brains behind.

Of course, Pastrana is the person that came up with Nitro Rallycross, but with the hard work of putting everything together now mostly out of the way, he’s left the running of the show to his team at Thrill One Sports & Entertainment, and strapped into his Subaru Motorsports USA WRX STI for a full assault on the championship title.

Two rounds out of five done, we’re effectively at the halfway point in the season, with the action set to resume in Phoenix this weekend after a five-week break. Pastrana’s made the final in both events so far, starting on the front row of both after stellar qualifying runs. He finished second to team-mate Scott Speed in a perfectly executed Subaru showing in Minnesota last time out, too.

At present he sits fourth in the standings, a mere 12 points off the top spot. Pastrana credits the latest improvements to the WRX STI and the vindication of having recently-crowned European champion Andreas Bakkerud running at the first two rounds as reasons for his early season success.

“As a driver it’s gone way better than expected,” he told DirtFish.

“The Subaru is a phenomenal car but you know what’s also good is to have ‘Snakkerud’ [Andreas Bakkerud] over. It proved that the car is, yes, very good and it was very competitive … but for me definitely, I would not say surprised but definitely happy to be starting front row at both races, [it] has been really cool.”

This year also marks the first time Pastrana is set to run a complete rallycross schedule, having only run partial campaigns before now. But while the extra seat time in a race setting – or the potential for even more over the course of the year – would usually be an obvious key for success, Pastrana believes his extracurricular activities outside of rallycross have boosted his form.

“What’s been interesting is even when I’ve jumped in for a one-off, I’ve been able to jump in and be competitive with my fellow Subaru drivers,” he said. “But this year what’s been really cool is all the driving I’ve been doing.

“The cars are still super-fast but they’re not ‘Airslayer’-fast. So I think just seat time this year and driving being my main priority has been a huge asset.”

Aside from pedalling his WRX STI, Pastrana’s also been heavily involved in the Nitro series and track development. But don’t for a second think that gives him any sort of unfair leg up.

He’s keen to point out that once the race weekend gets underway, ‘driver Travis’ is kept well out of the decision-making – although stopping his mind racing on the topic looks harder. When he appeared in the commentary booth in the middle of the Utah season-opener, he was buzzing with thoughts on track tweaks and the quality of the spectacle.

“So I think first and foremost my job is to make a fun series, and to make a competitive series.

“Obviously there’s always conflict but they’re [the organizers] like ‘you can’t be on track. When the race weekend starts, you can’t have any say’ and everyone’s coming to me like ‘oh we need to change this format, we need to do that’, I’m like, ‘dude, that’s why we’ve hired the guys that we’ve hired’. 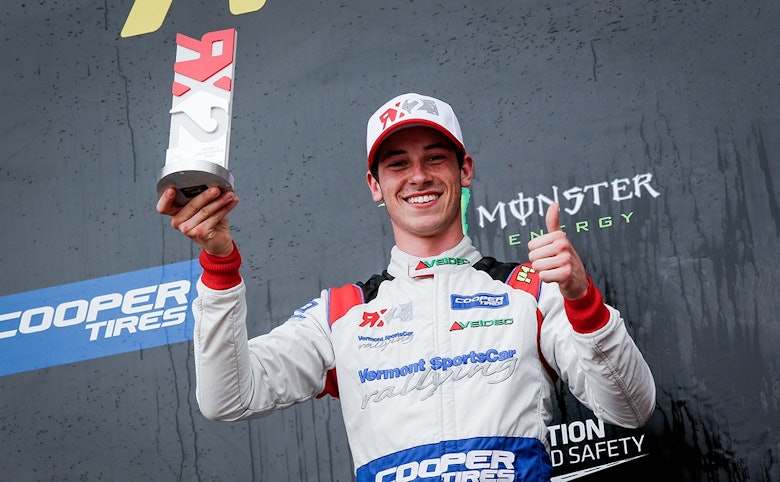 “They’re doing a great job, I’ve put in all my two cents, and I’ll get the track safe, and at that point it’s on the guys that are building the track and this point now the racing, the format that kind of stuff is on our guys and we’ll have a drivers’ meeting at the end of every race and I’ll speak my two cents as well as every other driver and that’s their job to take that into account.