World Rallycross enters a new era for 2021, with a new promoter (the imaginatively named Rallycross Promoter) bringing a different approach to the championship.

But there will be elements of familiarity, with a plethora of drivers, cars, and venues all returning.

Here’s everything you need to know about the upcoming World RX season:

As already mentioned, the championship has recieved a fresh lick of paint, with the blacks, yellows, and greens of the Monster Energy-supported IMG years making way for a blue color palette in-line with the new energy drink of choice Red Bull. That’s hardly a noteworthy change, but how World RX will be broadcast this year, certainly is.

Gone are the free multi-hour live broadcasts on YouTube, instead replaced by a streaming service called RX+ (replicating the WRC+ model in the World Rally Championship, also promoted by Red Bull Media House), which will broadcast every session exclusively live, along with more OTT (over-the-top) premium content.

A full season pass is currently available at the discounted price of €29.99 (around $35 at current exchange rates), while single round access can be had for €7.99 (just under $10).

Also new is the naming structure, with ‘Supercars’ ditched in favor of RX1, and Super 1600s being re-christened RX3s, bringing FIA-sanctioned rallycross in line with the likes of open-wheelers (Formula 1, Formula 2 etc.) and the World Rally Championship. Mercifully, the cars themselves remain the same.

But what about RX2? That’s gone. Well, almost. Debuting this year will be the new RX2e series, an all-electric support category that’s already attracted a healthy entry list for its first event, with past RX2 champion Guillaume De Ridder, Jesse Kallio, and Fraser McConnell among those racing in the opening round in Barcelona.

It’s very much a like-for-like replacement for the old Lites-based RX2 series, with the cars sharing similar constructions and appearances, although there’ll be fewer pops and bangs, and more buzzes and whirs with the Ford-based 310 bhp 2.4-liter engines making way for a 335bhp (250Kw), 30 kWH battery-powered twin motor setup. 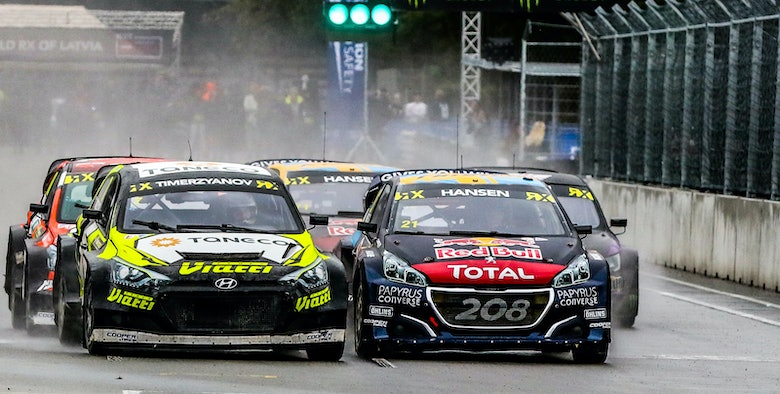 Nürburgring World RX round pushed back after floods

Regular followers of World RX won’t be too surprised by the driver lineup – three-time and reigning champion Johan Kristoffersson returns once again, this time behind the wheel of an Audi, while second-generation trio Timmy Hansen, Kevin Hansen, and Niclas Grönholm will be the ones everyone will be looking at the give the fast Swede a battle.

There are other veterans in the field, too, with Timo Scheider, René Münnich, and Mandie August pedaling a trio of Seat Ibizas, Krisztián Szabó running alongside Grönholm in a Hyundai i20, and Kevin Abbring representing a massively scaled-down Renault presence in an Unkorrupted-entered Mégane R.S. RX.

Two notable absentees however will be Andreas Bakkerud and Timur Timerzyanov. Both race winners have contested every World RX round to-date, making the Barcelona season opener a somber sight for fans of both popular drivers.

Liam Doran and Robin Larsson, along with the RX Cartel squad have also gone, with them instead opting to focus on Nitro Rallycross in the US, while Oliver Bennett is expected to follow them after he’s completed round one of World RX.

That first round is at Circuit de Barcelona-Catalunya this weekend, marking the third time (but first since 2018) that the Spanish Grand Prix venue has hosted the season opener.

The Nürburgring was set to host rounds two and three, but for the devastating floods in the nearby regions postponing that event until later in the year – it will instead host the season finale. Before then, there’s stops at Höljes in Sweden, Lohéac, France; Riga in Latvia, Spa-Franchorchamps (although a question mark remains over that event as well because of the Western Europe floods), and Montalegre in Portugal, marking a welcome return to a hugely popular track.

A round in Hell, Norway had been planned as the season opener in June, but it fell by the wayside in May as a result of the ongoing COVID-19 pandemic – another reason that for the second year in a row the calendar remains European-only, despite the series’ designation at a World Championship.

Before a wheel has even turned, we know the 2021 World RX season will be a historic one, not just for the predictable multi-way fight for the title, but for the fact that it’ll be the final top-level rallycross season in Europe to be contested exclusively by combustion engine cars. Electric vehicles will debut in the premier class next year, as the series looks towards a greener future.