Johan Kristoffersson and Andreas Bakkerud’s coming together in the World Rallycross Championship’s Barcelona final last Sunday reignited an age-old ideological debate; to penalize or not to penalize?

Rallycross is short distance, high-intensity racing that’s naturally going to lead to contact. But when a car ends up nose-first into a tyre wall, then gets t-boned by an unsighted competitor, questions are going to be asked about whether the drivers playing bumper cars on the run to turn one has gone too far.

In the end, the stewards in Barcelona took no further action on the incident between Kristoffersson and Bakkerud. But was that the right call? DirtFish’s editorial team had split opinions.

Take nothing away from Kristoffersson’s fourth World Rallycross Championship victory of the 2020 season, it was brilliantly managed and well executed. Particularly when you consider the fact that for much of the day up until the semifinal, the double champion had barely seen any clear air at all.

But his role in the startline incident which took out RX Cartel’s Andreas Bakkerud meant his victory – albeit not for too long – was the main talking point post-final.

Traffic played a big role in Kristoffersson’s challenging path to the front-row and part of the reason Johan found himself in so much traffic was down to being squeezed at the start of his heats.

The peculiar nature of the Circuit de Barcelona-Catalunya means the first corner comes very quickly after the startline, which inevitably leads to a barging and boring of cars into an increasingly tight radius turn.

Kristoffersson got a better start than fellow front-row starter Bakkerud, but that doesn’t mask the fact that by the time the pair reach the braking point for turn one, they are virtually side-by-side. It will be argued that Bakkerud was not as far alongside as Petter Solberg was against Mattias Ekström in a very similar incident in 2018, but that is almost irrelevant in this case.

Bakkerud is as far alongside Kristoffersson as he needs to be in order to challenge for the holeshot. Kristoffersson didn’t expect Bakkerud to brake as late as he eventually did, and he did leave a small gap as promised.

But that gap is a constantly diminishing one. It’s not a massive swerve like Ekström, granted, but the action and subsequent melee had the same impact on the race.

Bakkerud, like compatriot Solberg in 2018, had a genuine shot at the race win, and the fact that he ended up in the barrier and out of the race while Kristoffersson won means that parallels to 2018 must surely be made.

In 2018, Solberg clips the side of Ekström, launches into the air before hitting the barrier head-on; Bakkerud’s Renault Mégane suffers the same fate.

Kristoffersson is not a dirty driver by any stretch, but last weekend was an error of judgment which, according to precedence, should have been penalized. Stephen Brunsdon

Yes, Kristoffersson’s move wasn’t as much of a slam dunk as Ekström’s, but that shouldn’t matter when it comes to dishing out punishment for what is essentially the same crime.

Ekström clearly benefited from the Solberg incident and was stripped of his win after the finish. It cannot be denied that Kristoffersson also profited just as much as Ekström and kept his win.

Solberg was very much in the hunt for the win in 2018, while Bakkerud’s form last weekend suggested the Mégane also had a shot at victory.

Both challengers had their races ended on the first lap, while the instigator won.

To quote a prominent figure from the world of Formula 1, Ron Dennis, “where is the consistency?”

Now, it’s not that I campaign for consistency for consistency’s sake. It would be a different story if this happened at Mettet for example, where the inside concrete wall and the inevitable turn one squeeze caused its own particular troubles.

Kristoffersson was the victim of a similar incident with Solberg at Silverstone in 2018, but at least the pair were alongside each other in the braking zone. Kristoffersson was also squeezed at Mettet and mounted the inside wall before carrying on in a classic case of too many cars in one space.

Rallycross is rougher than circuit racing and it mustn’t be forgotten that a bit of contact is good rallycross. But this isn’t about the contact per se. This is about a squeeze – which obviously was more of a miscalculation rather anything malicious – and the consequences associated with it.

Either both incidents warranted a penalty or none of them did.

Kristoffersson is not a dirty driver by any stretch, but last weekend was an error of judgment which, according to precedence, should have been penalized. – Stephen Brunsdon

Kristoffersson and Bakkerud’s coming together was an unfortunate racing incident undeserving of a penalty.

Like my colleague Stephen points out, consistency in stewarding decisions is critical. But that’s why it would have been inappropriate to dole out a penalty to Kristoffersson here; the incident between Ekström and Solberg bears little relation to the one that ended with Bakkerud pointing the wrong way and being t-boned by Larsson, even if it looks the same at first glance.

Let me explain why.

Firstly, 2018. Ekström gets a slightly better launch than Solberg but not by much; as they approach the braking zone, Ekström’s Audi is only inches in front of the Polo. They make side-to-side contact, their wheels almost perfectly in line with each other.

Ekström now has a dilemma. He hasn’t cleared Solberg before the turn-in and he doesn’t have the required space to simply fling it the long way around without running wide and opening the door wide open for those behind. And if he keeps it tight, Solberg could conceivably run him off to the edge of the track on exit and allow Johan up the inside on the run to turn two.

So he takes neither option, instead turning into the apex as if there’s no-one there and feeds Solberg into the tyre stack nose-first. Back then, there was no wall to hit.

The replays left little doubt; Ekström had the option to go straight for a bit longer and leave Solberg enough room to avoid the tyres, but he chose to turn left and head straight for the apex instead, rightfully earning a penalty.

Fast forward two-and-a-bit years and there’s another car going nose-first into tires at the first corner. But the story of how it ended up there is much different.

Kristoffersson, driving the same Polo chassis that had smacked that tire stack two years earlier, was the one making a superb launch this time around. Bakkerud had struggled with the second phase of his launch; his reaction time was good but the bulky Mégane just didn’t get off the line with the same zest and vigor of the all-conquering Polo.

Having been fed into barrier earlier in the day by Robin Larsson – who got a penalty for his actions – Kristoffersson said he wouldn’t do the same thing to Bakkerud. And he didn’t, even if at first glance it might have looked that way.

Both cars are on the brakes, and Kristoffersson isn’t making a choice to turn sharp left; inertia is doing that for him Alasdair Lindsay

The two-time world champion was pointing his Polo towards corner entry but by the braking zone, his rear wheels were already in front of Bakkerud’s front wheels. He’d already taken the holeshot.

Kristoffersson pointed his Polo towards the vicinity of the turn one apex rather than driving perfectly straight from his grid slot but, crucially, there was a Megane’s width of space between where that Polo was pointing and the wall.

Some of that space is beyond a white line a few feet in front of the wall, which then becomes kerbing as the apex approaches; not an ideal racing line given it would compromise the driver’s exit, but legal to use in World RX nonetheless.

One of the few similarities to 2018 kicks in at the braking zone; the car on the inside throws out the anchor marginally later than the one outside. But this time, the car on the left doesn’t have equal track position. Bakkerud’s front-right wheel hits the rear-left of Kristoffersson’s Polo.

The Mégane’s fate is now sealed.

It’s not straight panel-to-panel contact, but at an angle. It sends Kristoffersson into a half-spin, the pendulum effect turning him directly towards the absolute apex on the inside of the corner. Both cars are on the brakes, and Kristoffersson isn’t making a choice to turn sharp left; inertia is doing that for him.

With a Polo now obstructing the path to the apex, Bakkerud’s Mégane ends up nose-first in a tyre barrier, spinning around before it gets clobbered by an unlucky Larsson.

Ultimately Kristoffersson kept his promise, albeit only by the finest of margins. But that’s what world championships are about; the absolute best racers the planet driving to absolute precision.

Fine margins panning out slightly differently could have sealed a different outcome. A very slight jink to the left by Bakkerud before hitting the brakes would potentially have turned the corner-to-corner contact into side-by-side contact, leaving them to battle it out for the lead through the first turn. Or if Kristoffersson had outbraked himself slightly, Bakkerud may have avoided contact with the Polo entirely.

But we must remember that at its core rallycross is a (light) contact sport. Jostling for position is in the discipline’s DNA. Accidental contact goes with the territory – as shown by Kristoffersson climbing the back of Timmy Hansen’s Peugeot a day earlier, not realizing his front bodywork was completely gone – and that’s all this was too. A complete accident. – Alasdair Lindsay 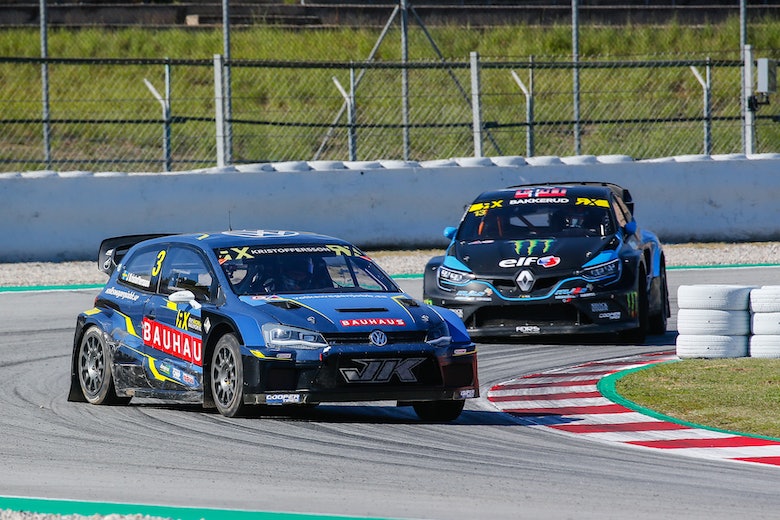 From the drivers' perspective – Bakkerud and Kristoffersson discuss the incident