Timmy Hansen and Enzo Ide have been disqualified from the final of the penultimate World Rallycross round of the season at the Nürburgring following their involvement in a lap one incident that took Niclas Grönholm out of victory contention.

Going into the first corner, Grönholm was hit from behind by Ide and then Hansen, who was clawing his way through from the back of the grid after receiving a penalty for a forceful move on Ide in their semifinal.

The collisions in the final forced Grönholm wide at that first corner, and left him some way off the pack. Ide retired post-clash, while Hansen was able to recover to second place.

Afterwards a visibly angry Grönholm exchanged words with Hansen before the Peugeot driver had got out of his car.

In two separate stewards briefings, Ide was judged to have given “a strong push which lifted the rear of the #68 [Grönholm] which led to the contact with #21 [Hansen] and #68” while Hansen was said to be “late in braking” resulting in his own contact with Grönholm.

The infractions, which come after every driver except victor Johan Kristoffersson was investigated, mean that debutant Yury Belevskiy has been promoted to second place, while Krisztián Szabó gains his second podium finish of the year with third. Grönholm subsequently moves up to fourth.

The penalties also have far-reaching title implications ahead of Sunday’s season finale.

Instead of a nine-point lead, Hansen’s loss of points for second means that he now has only a four-point margin over Kristoffersson.

Grönholm gains an extra point, but with Hansen’s loss of five, it means that deficit is still at 24 with 30 available on Sunday, so he remains very much a championship outsider.

Szabó also gains an extra point but remains out of title contention, having gone into the weekend with a slender chance of a maiden title. 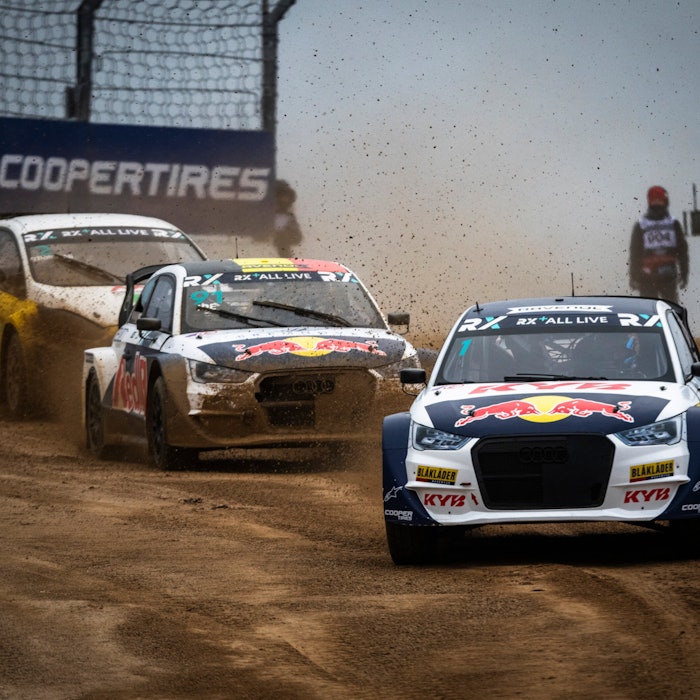 How Kristoffersson ate into Hansen's lead on Saturday

Ironically, while Hansen’s penalty has made his chances of taking a second World RX crown it’s briought his brother and team-mate Kevin Hansen back into contention.

The younger Hansen, didn’t make the first Nürburgring final after a poor run of heat races on Saturday. He is now 26 points behind his brother, so while he returns to mathematical contention it is an unlikely outcome for him to end Sunday as champion.