Mattias Ekström has admitted that he is unsure whether he will have the opportunity to continue racing in World Rallycross this year, despite a successful stand-in appearance at Höljes.

The 2016 champion made a last-minute return for the opening two rounds of the season, deputizing for Janis Baumanis who hit budget issues in the wake of the COVID-19 pandemic.

After both Höljes races, Ekström sits second in the points, just two points adrift of Johan Kristoffersson, but there are currently no plans for him to make any further appearances.

“It was planned for today, I will speak with Joel [Christoffersson – JC Raceteknik boss] when I come back,” Ekström said after his round two win.

“I still have other commitments which are colliding with other weekends.

“This is sure and Finland, I must admit, it would be nice,” he teased.

“But then afterwards it looks difficult – unless some of my bosses or friends or partners would like to contribute then I can continue, but for the time being that’s not the plan.”

Ekström hasn’t raced multiple rounds of the series since 2018 – he made a one-off appearance at Spa-Francorchamps last year in an older spec car – but wasted no time getting back up to speed during the season-opening double header in Sweden. 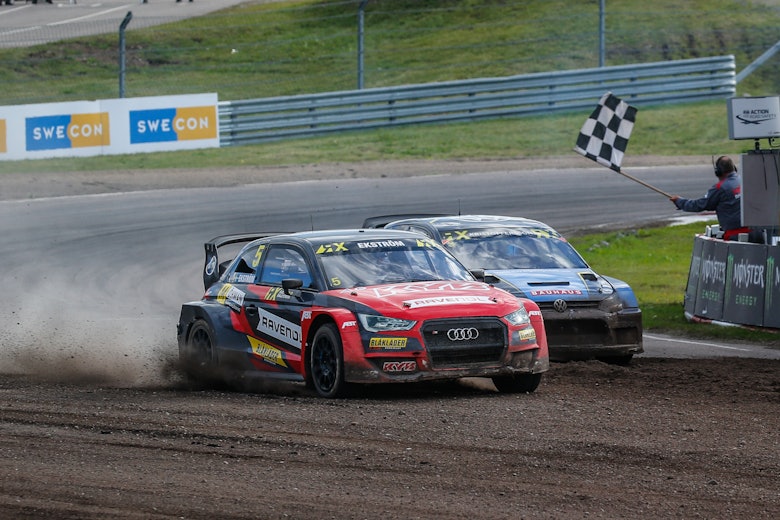 After finishing second overall in round one, Ekström once again took the fight to Kristoffersson in round two, and in the final, made an inspired joker call to give him clear air that would allow him to set a string of good lap times that would give him the win.

“It was a very exciting weekend, I have to say,” he said.

“Yesterday, being back fighting, I felt we had pace but [it] didn’t really play into our hands.

“Today again we had constant weather, we were making small adjustments and I have to say Robin [Larsson] was really contributing and did really good starts – he took me in the semi-final but then I got clean air in the final which was the key to my win.

“The car worked fine and I had the gaps to Johan and I could hear I was reeling him in and I knew it, just to bang every lap in, inch-perfect to beat him.”

“It’s quite a pleasure because it’s quite a while since someone beat him in that car fair and square,” said Ekström. “[It] hasn’t happened so many times so [it’s] a big compliment to KYB that have been developing the dampers with us for such a long time.

“We made a step over the last two years with them. Also, the other partners that have been supporting me for this really late call and the team, I can only be grateful, and to win, it’s what I love, and it was a really great win.”