Travis Pastrana’s second-placed run in Sunday’s Goodwood Festival of Speed timed shootout was more than just a mere showrun at one of the world’s greatest motorsport events.

That’s because for Pastrana and the Subaru Motorsports USA team, it provided a perfect opportunity to prepare for next month’s Mount Washington hillclimb back home in the United States.

Subaru’s American factory squad has previous at Mt. Washington, with Pastrana taking a rallycross-engined rally car up in record-breaking time in 2017. With the VT20G ‘Airslayer STI’’s competitive debut now in the books, Pastrana has more of an idea about how he needs to handle the 860 horsepower machine on more familiar territory.

“I’ve got really comfortable being very scared,” Pastrana told DirtFish. “Goodwood doesn’t have a lot of big 1000-foot drops, so I kinda know what this car can do.

“I feel much more confident on pavement. Every time I’m on pavement I feel better, I just haven’t had a lot of experience on pavement.

“[OK,] My NASCAR career, but that was a disaster,” he joked, “so I’m getting better and I feel that this was a huge help.”

Pastrana set the pace in the timed competition on the hillclimb for much of the weekend, culminating in a first-placed finish during Saturday’s qualifying session. And although rain threatened on Sunday – which ultimately would’ve helped the four-wheel-drive Subaru – it remained largely dry, allowing Rob Bell in a GT3-based McLaren 720S GT3X to better him when it mattered most.

Bell’s winning time, a 45.01 seconds, was 1.19 seconds quicker than Pastrana’s. Despite missing out on the win, Pastrana was happy to get to run the car in anger in the dry. 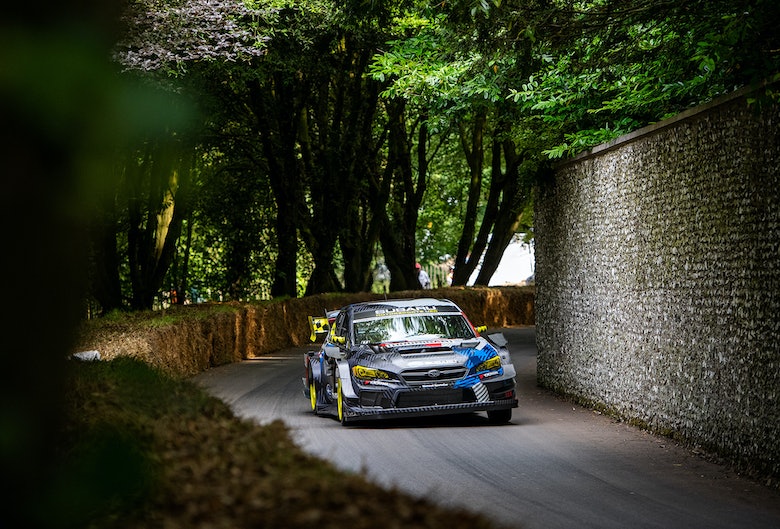 Pastrana misses out on Goodwood King of Hill title

“We were able to qualify first when the course was half wet – the all-wheel-drive, the downforce, everything works so great – but when it was dry we were about 20 miles an hour slower coming across the finish line,” he said. “860 horsepower’s great, but I think we need 1000 if we come back.

“I might’ve overdrove a little bit, so a 45[second]-high might’ve been a possibility with a perfect run, but that was a second better than my best run all weekend. I felt like I got everything out of it.

“We did a little extra warming up of the tires at the beginning which helped the first two corners and I don’t feel like I left anything on the table so although we lost, I was actually happier to see it dry just to know what this had against such a supercar.” 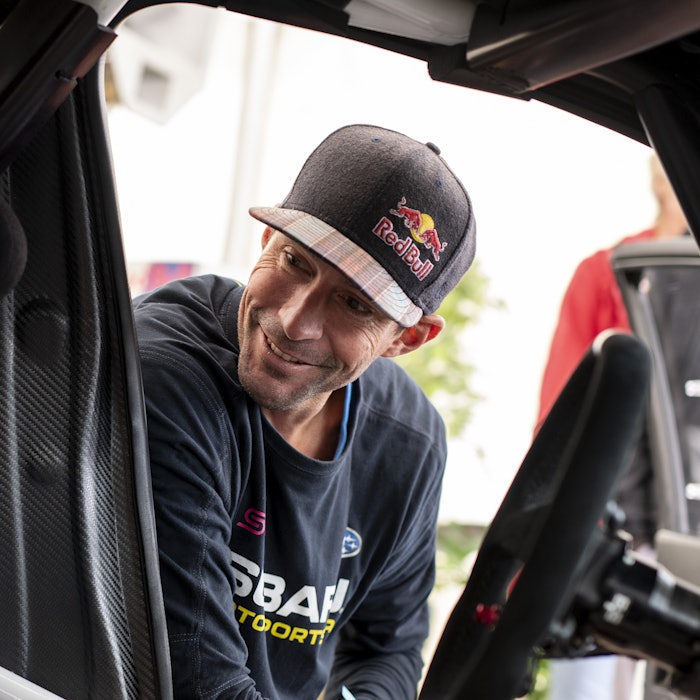 The Goodwood experience exceeded my expectations from start to finish. It’s taken a year off my life and yet it’s been the best year of my life! Travis Pastrana

While Subaru Motorsports USA previosly appeared at the Festival of Speed in 2019 – Oliver Solberg driving the American Rally Association Open class car he was sharing with Pastrana that year – the 2021 edition marked the first time Pastrana himself had made the trip across the pond for the four-day celebration.

“Man, the Goodwood experience exceeded my expectations from start to finish,” he said. “I know there’s a lot of good drivers that come over here, I didn’t know that every top driver – legends of the sport from all years past would all be here.

“It has [been a long weekend]. I’m looking forward to the plane flight to sleep, but these four days has felt like… it’s taken a year off my life and yet it’s been the best year of my life!”

Pastrana’s Gymkhana Subaru will take on the Mt. Washington hillclimb in New Hampshire on August 13-15 before heading to the New York Auto Show a week later, which will kick off a four-stop static tour for the car between August-November.

His next competititve appearance will be on the New England Forest Rally, the fifth round of this year’s ARA season.

Why Rovanperä, not Tänak, is favorite to win Estonia