If you’ve been a fan of rally for any period of time (or any form of racing for that matter), there is a good chance you’ve heard something about Group B. For those of you who haven’t, it is often viewed as one of the most legendary and exciting times in not only the sport of rally, but in all of motorsports. Over the years, the different World Rally Championship classes have had to follow strict set of rules governing limitations on power, weight and technology that the teams are allowed to use when building a car. Since rally cars are production-based, the manufacturers are required to build a minimum quantity of a model each year, for it to even qualify for use as a rally car (Current WRC requirements are 2,500 units). Group B was VERY different, with the minimum production requirement only being set at 200 units, and very few restrictions on pretty much everything else. Teams were permitted to use high-tech materials in order to make the cars weigh as little as possible. There were also no restrictions on the amount of boost the cars were allowed to have, meaning Group B cars were outfitted with massive turbos, resulting in a massive horsepower and torque increase from previous years. This meant cars achieved more than 500 horsepower. In 1986, the Audi Sport Quattro rally car produced a massive 591 horsepower! 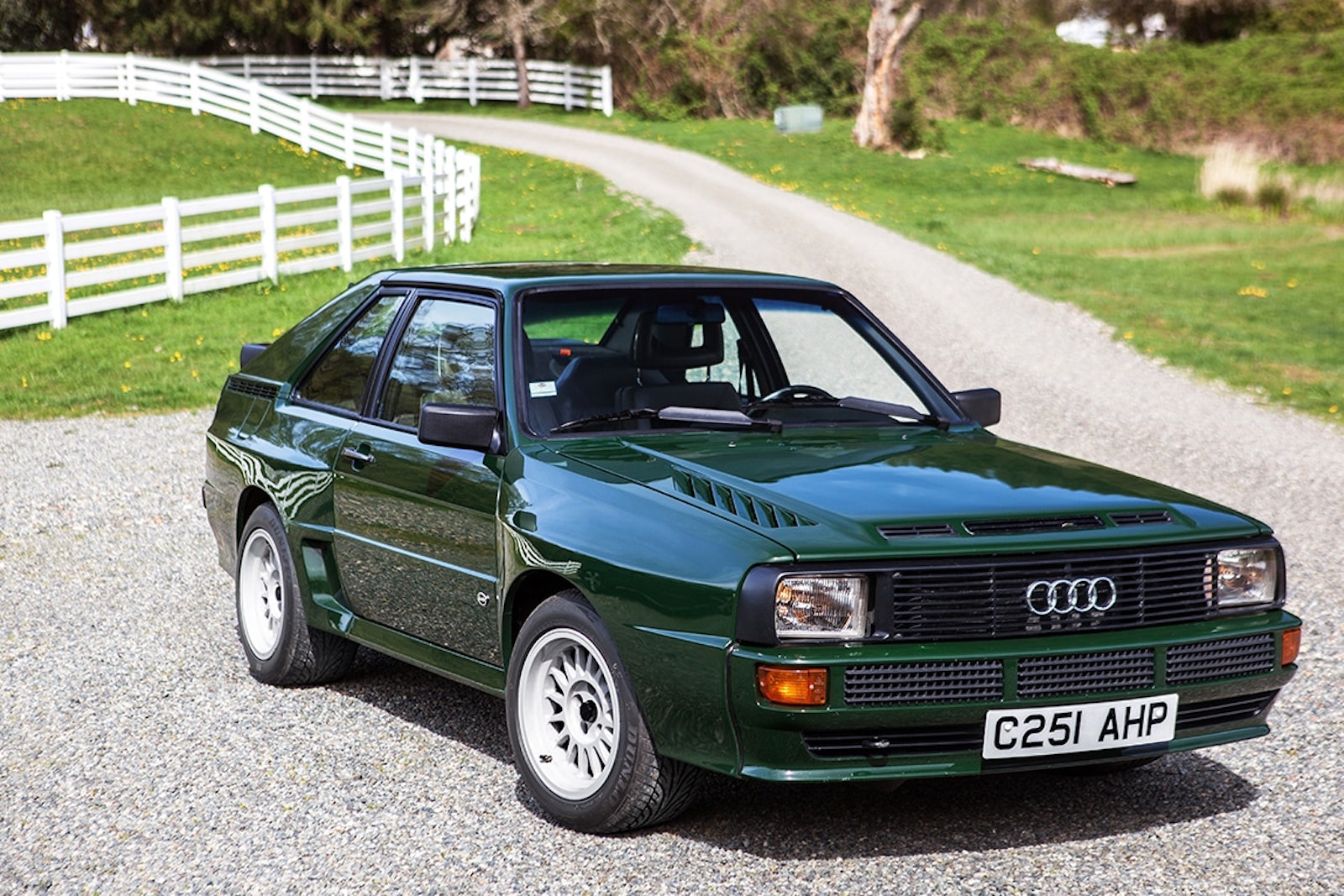 The Audi Sport Quattro was one of the most important, if not the most important car of all time in the sport. Pioneering the use of a four-wheel drive system in rally cars, Audi set the standard for top level rally cars around the world today. The company first introduced the “Quattro” system in 1980, prior to the birth of Group B. Before that, manufacturers had toyed with the idea of using four-wheel drive systems in their rally cars, opting not to with the thought that the added weight and high complexity of the systems would outweigh the advantages over the best two-wheel drive vehicles at that time. However, Audi was able to prove with the Ur-Quattro (original Quattro) that a well-sorted four-wheel drive system was immensely beneficial. 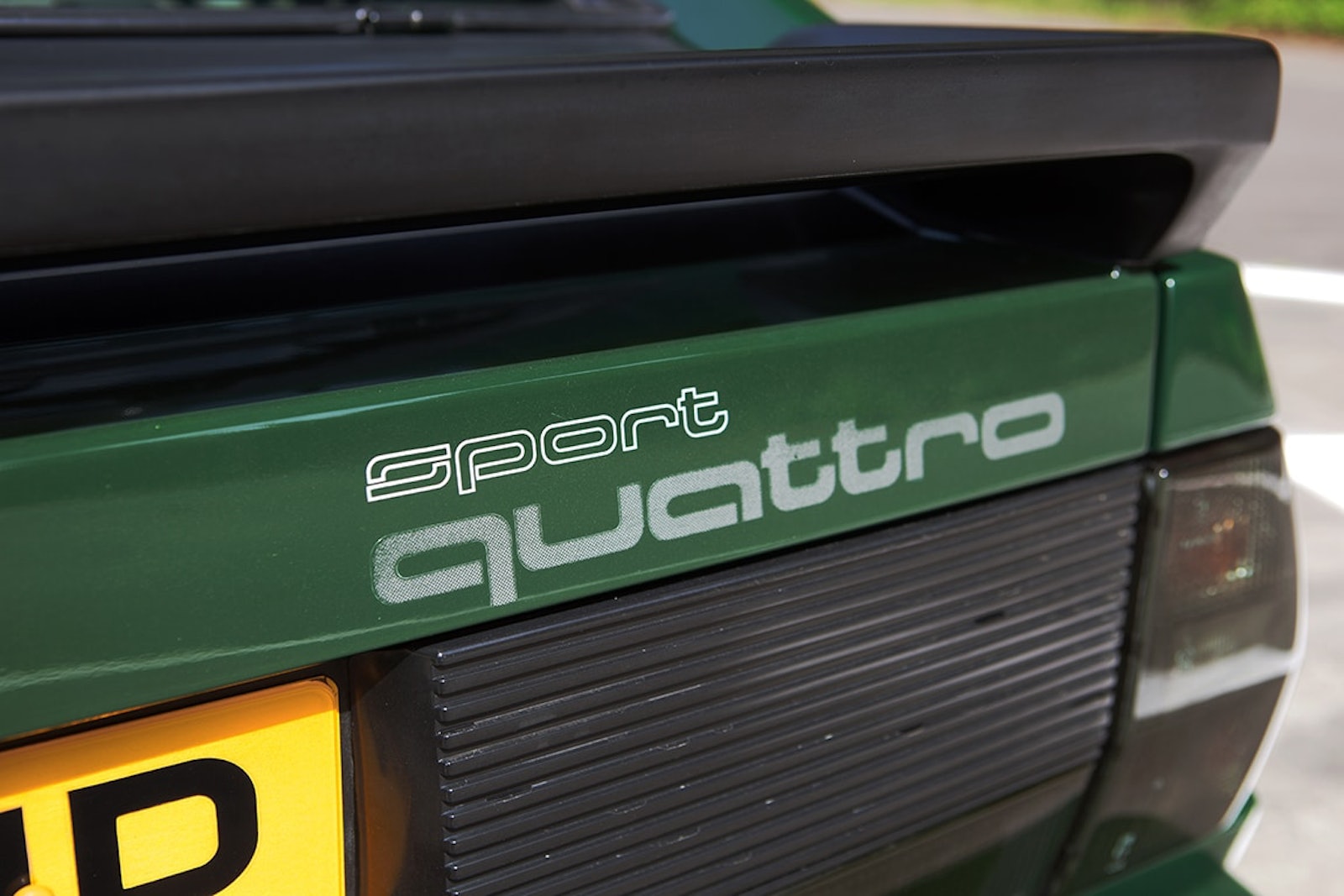 With the introduction of Group B in 1982 and the success of their Ur-Quattro model, Audi opted to use that as the “basis” for the Sport Quattro, though there were few similarities between the two, aside from looks. Since the FIA (International Automobile Federation) only required 200 models of the car to be built to become available for sale to the public, manufacturers were able to build more purpose-built rally cars that didn’t need to be based on a mass production model, but the other way around. 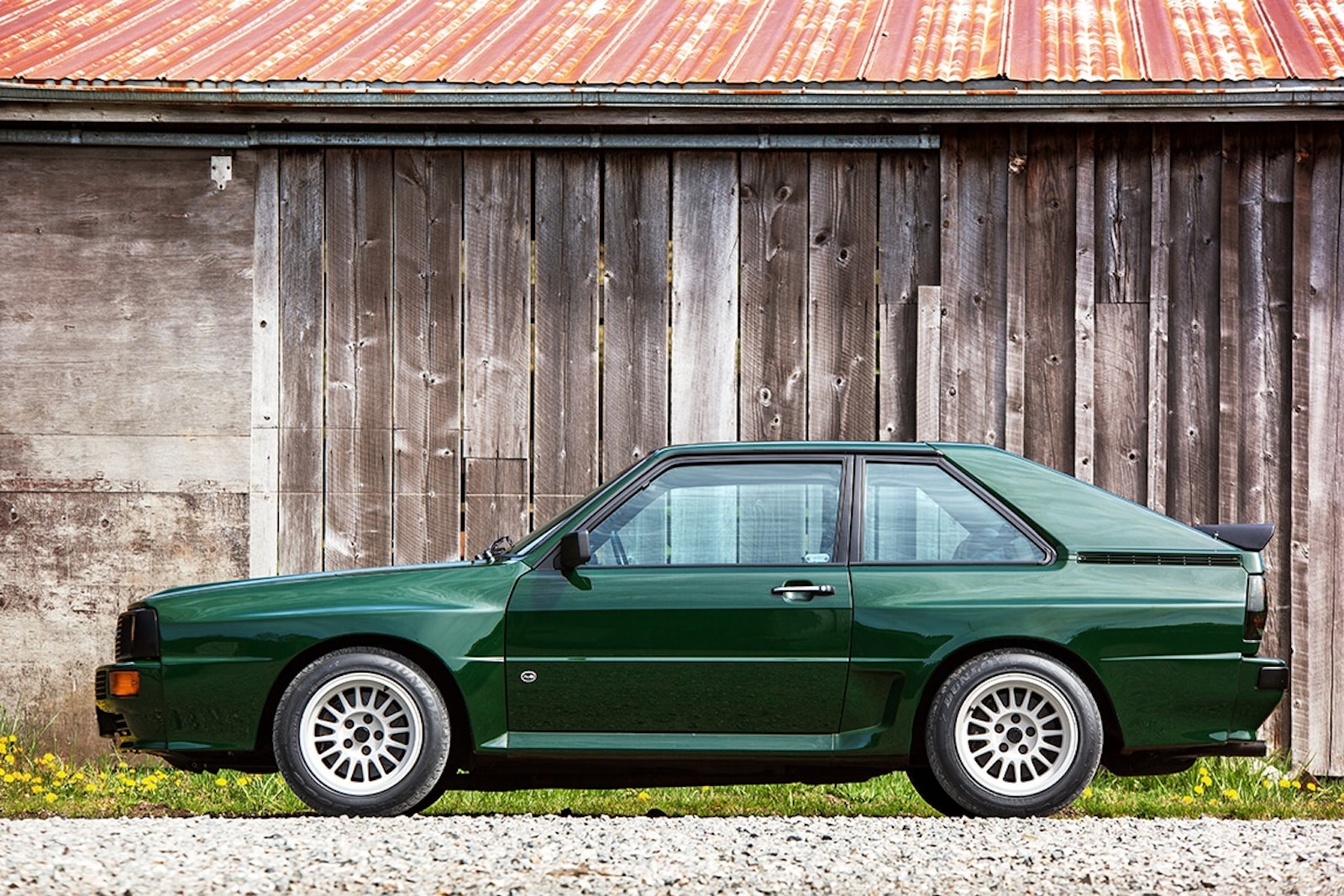 The development of the Sport Quattro was done in secret by Audi engineers at a separate location from where the normal road cars were manufactured at the time. One of the most noticeable exterior differences between the Ur and Sport Quattro was the shorter wheelbase, reduced by 12.6 inches between the B- and C-pillars. The steel monocoque chassis was produced by Baur, a specialist coachbuilder near Audi’s headquarters. They were also tasked with fabricating the exterior bodywork and styling of the cars from materials like carbon-Kevlar, fiberglass and other composites. The use of these lightweight materials not only aided in cutting the overall weight of the cars by nearly 800 pounds, but also allowed the designers to get a little more creative with the looks – providing sleeker, wider wheel arches and the distinct hood vent, unique to the Sport Quattro. 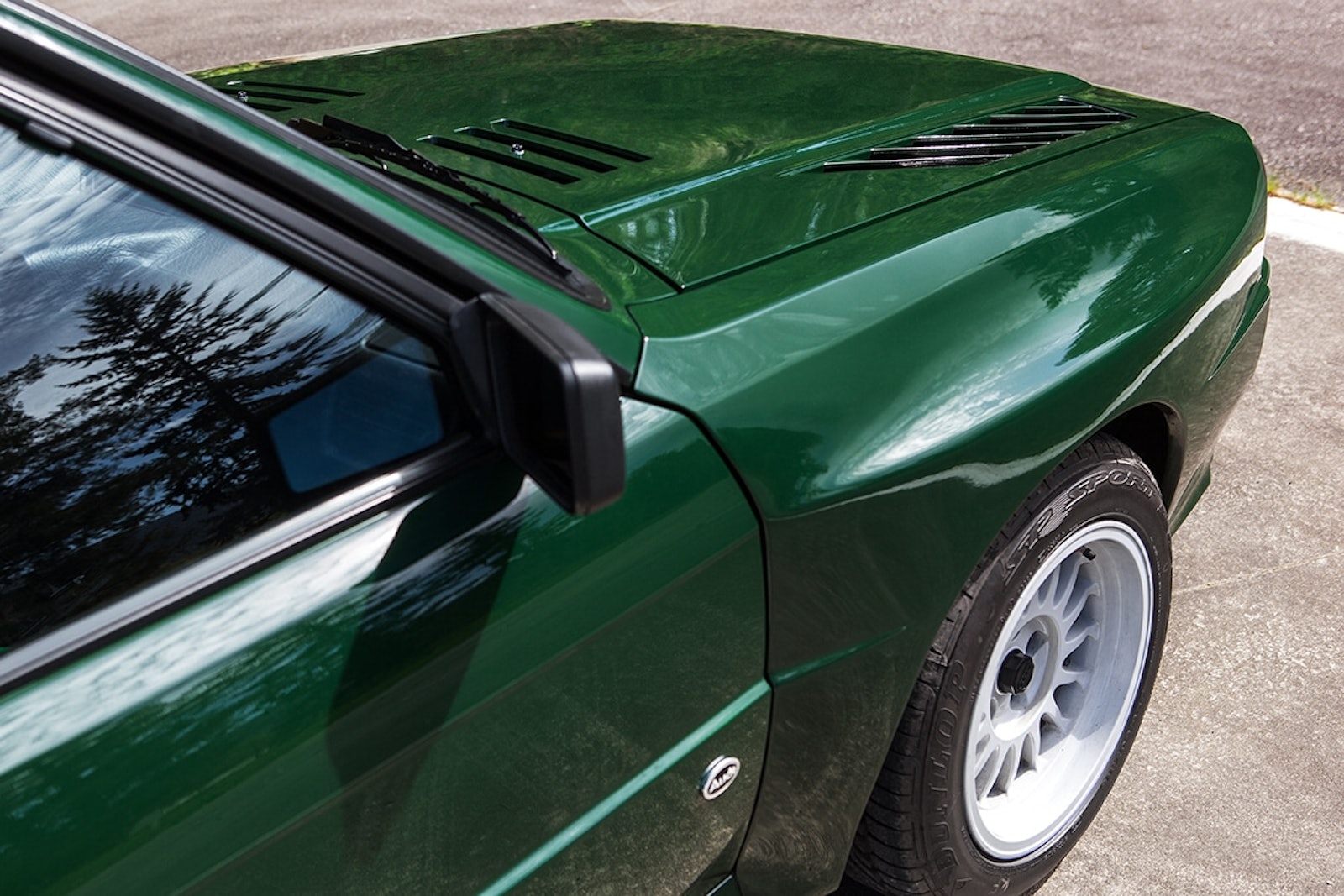 While the Audi “works” cars were pushing out massive horsepower and torque numbers, the street version of the car was a little tamer, but still no slouch. The powerhouse in the Sport Quattro is a 2.1 Liter dual overhead cam, 20-valve five-cylinder engine, equipped with a Borg Warner KKK-K27 turbo and Bosch electronic fuel injection system, producing 302 horsepower and 278 lb/ft of torque. This may not seem like a huge output number these days, but in the late 1980’s, these cars had some serious get up and go! 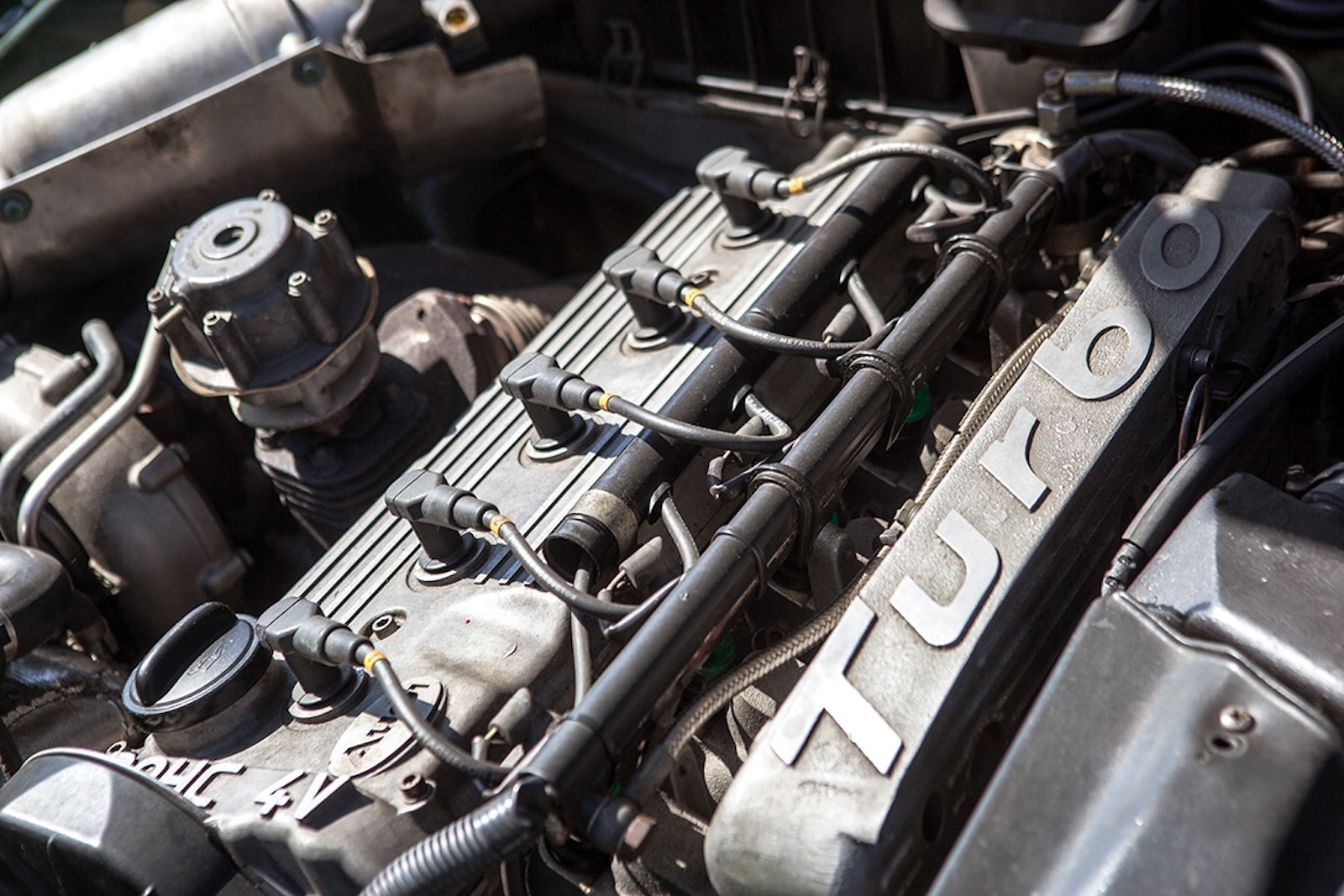 As I pulled out of the parking lot of the owners’ garage and drove through the streets of Issaquah, I thought to myself, “This feels like any other 80’s Audi.” That first impression changed pretty quickly on the on-ramp to I-90. I figured I’d see what kind of get-up-and-go the old girl had – let’s just say my eyes got big and I couldn’t help but say profanities with excitement! That was about the time I fell in love… Did I mention the turbo on the Sport Quattro is massive? To put it in perspective, people are mounting Borg Warner K27 turbos to their Cummins Diesel engines! As with most cars that are equipped with a huge turbo, there is a good amount of lag. But, once that huge turbo spools up at just above 3500 rpm, the acceleration is seriously unbelievable- it feels more like a car with 400 lb/ft of torque. It’s a smooth, yet very abrupt woosh of power that pushes you hard into your seat. You REALLY want it to keep going, but before you know it, it’s time to shift and do it all over again for the next gear. 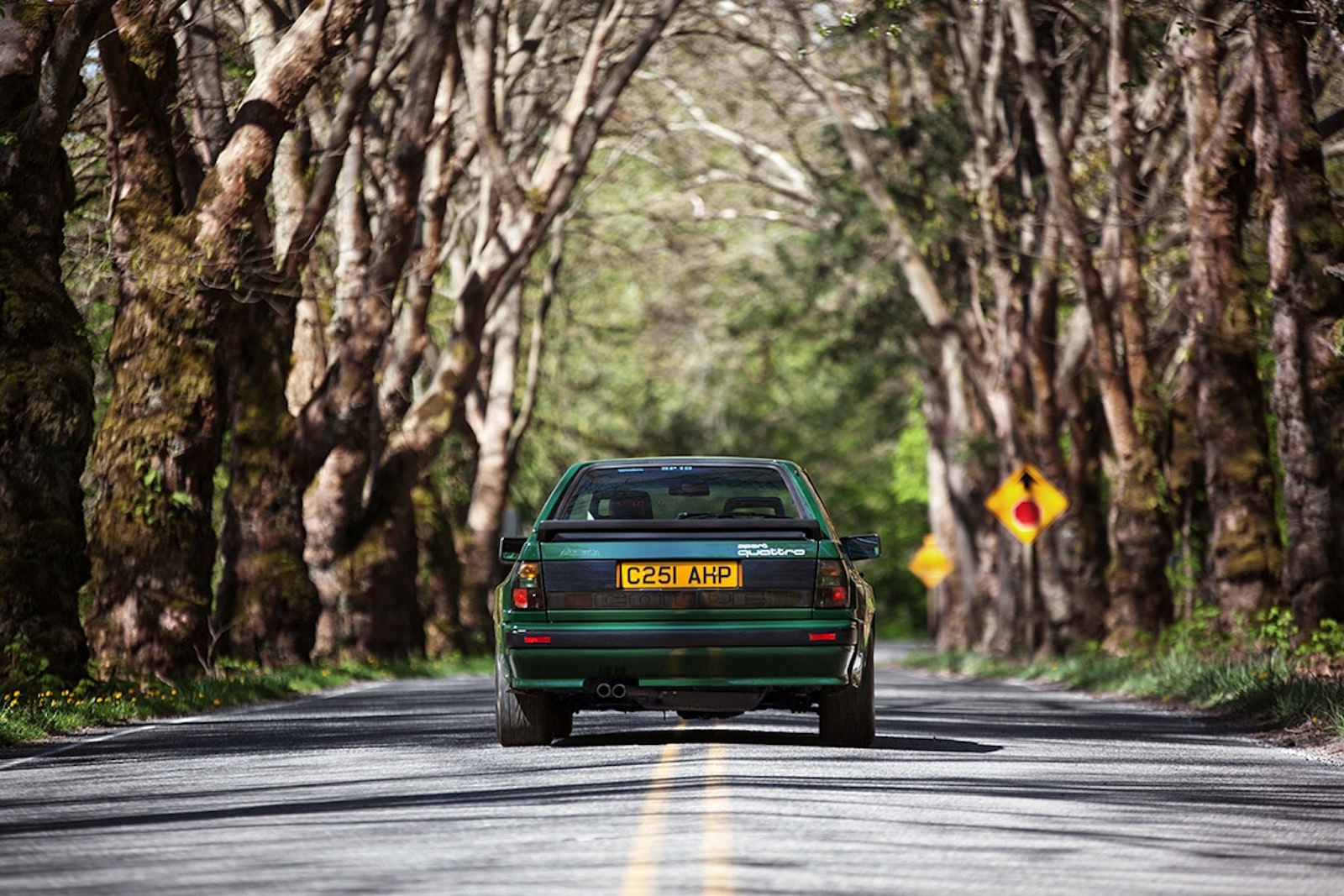 You would think with a car that is 5 years older than I am (I’m 27), it would be a heavy lumbering beast with soft suspension and a ton of body roll, like your grandpa’s Cadillac. But let’s face it, these are Germans we’re talking about here… they aren’t known to do anything less than perfect. If that’s not enough, it was developed by Germans who were Audi’s top engineers at the peak of the World Rally Championship.

After driving on the highway for a little while, I thought to myself, “What am I doing on the interstate? I’m in an Audi Sport Quattro…” I quickly decided to get off a couple exits early and take the “long way” back to DirtFish. I went north from Preston through Fall City, then east on WA 202 before taking Tokul Road and dropping down the driveway to the DirtFish headquarters. This was by far the best decision I made that day- the curves and elevation changes of this route are what this car was made for. It was quickly evident that the German’s hit it on the head with this one. The handling and the way it carved through corners is far superior to the majority of new cars these days.

Corner entry using proper trail braking technique in the Audi Sport Quattro doesn’t encourage the nose of the car to dip, but rather plants itself hard where you want it to be. As you ease off the brakes, it stays there all the way through the corner, until you roll back on the power… As long as you set the car properly for the corner on entry, you can lightly ease into the power earlier than you would expect in a 4WD car, and it still feels like you’re riding on rails. For all the skiers out there, it feels like carving down a mountain on a freshly groomed ski run – solid and fast with absolute control. Nailing one corner beautifully will set you up to smoothly connect to the next one with just the right amount of body roll. Keeping the revs’ high enough for the turbo to power you out of each corner makes for one of the most fun and raw drives I have ever taken. Seriously, I don’t think I’ve had that big of a smile on my face while driving a car in a long time (and I’ve had the opportunity to briefly “rally” an Audi R8 in the snow). With the amount of character this car has, how could I not be beaming from ear to ear? 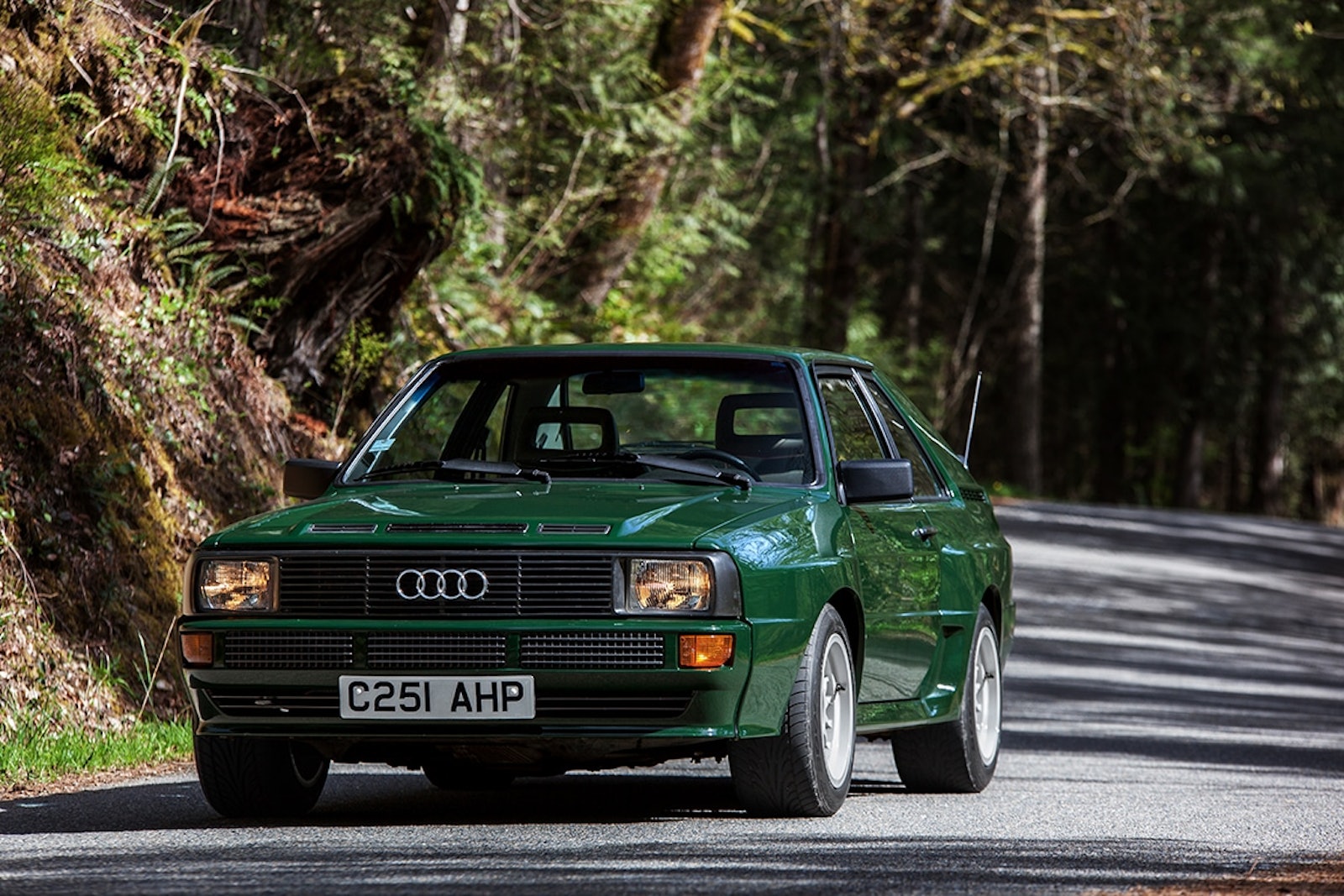 The history on this particular Sport Quattro is a very unique one. First of all, it probably has more miles than any other one on the planet, currently sitting at 137K miles. That will probably breath a huge sigh of relief into any car nuts out there who think that a car is made to be driven rather than sitting in a garage rarely seeing the light of day. The original owner, Tom Hammond, turned up to the Audi factory to pick up his brand new Sport Quattro. While he was there, he saw a prototype Audi works S1 E2 “Pikes Peak” car sitting in the lobby. After some persuasion, he was the proud owner of not only a Sport Quattro road car, but also a 680 horsepower Audi rally car. He then proceeded to purchase a trailer, load the rally car, hook it up to the road car and tow it all the way back to his home in the UK. Following his EPIC purchase, Hammond subsequently showed up to multiple rallycross and hill climb events around the UK, driving his Malachite Green Audi with the works car in tow to compete with. It was then passed along to the [then] Chairman of the UK Audi Owners Club from whom DirtFish owner, Steve Rimmer, purchased it. Following Steve’s purchase, the car was loaded on a boat and shipped to Washington State where it was added to his already impressive collection. 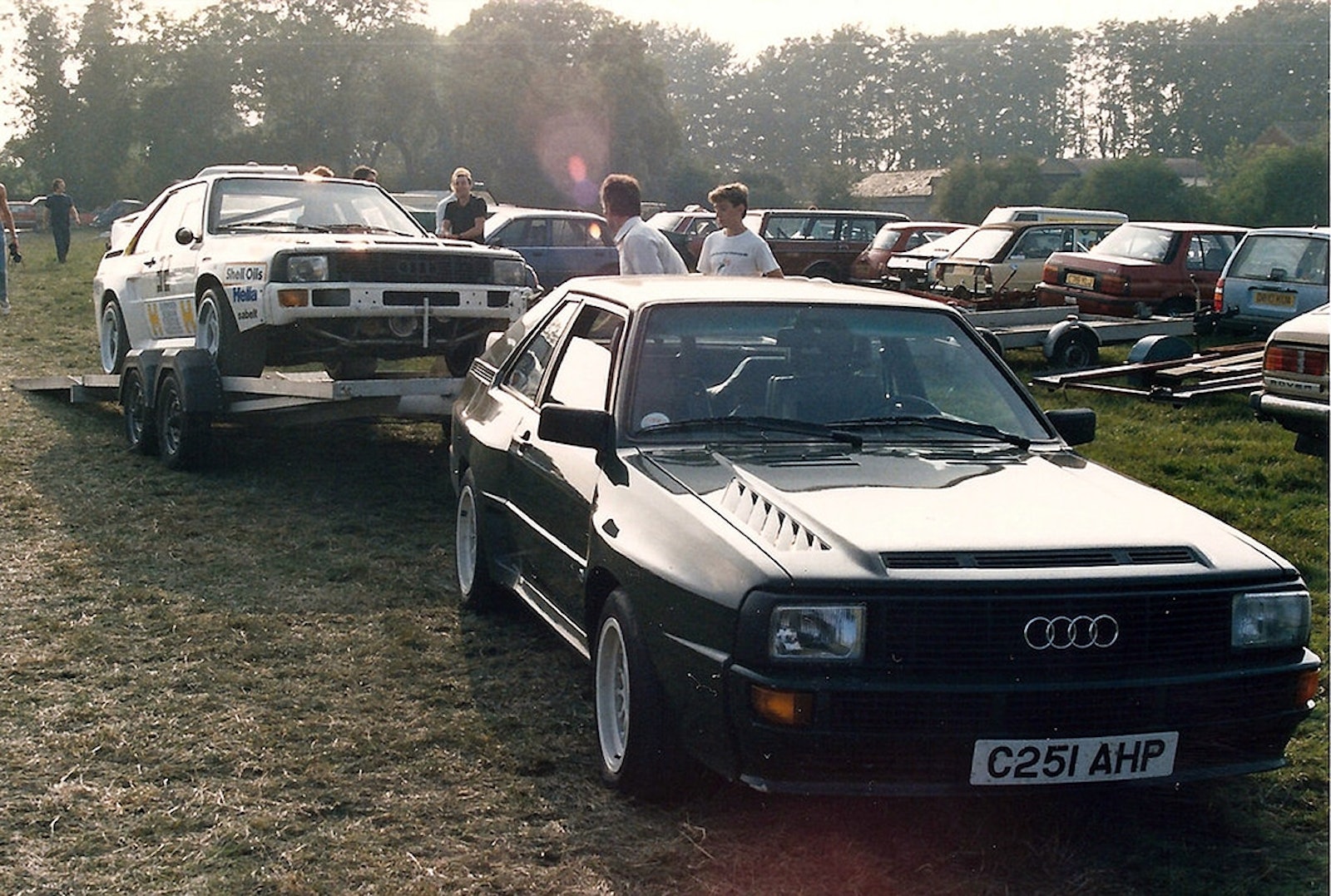 Side Note: To make this car even more rare, it was one of only 15 that were dressed in the beautiful Malachite Green, which paired with the white 15 inch Ronal wheels, gives it a very distinct and distinguished look. 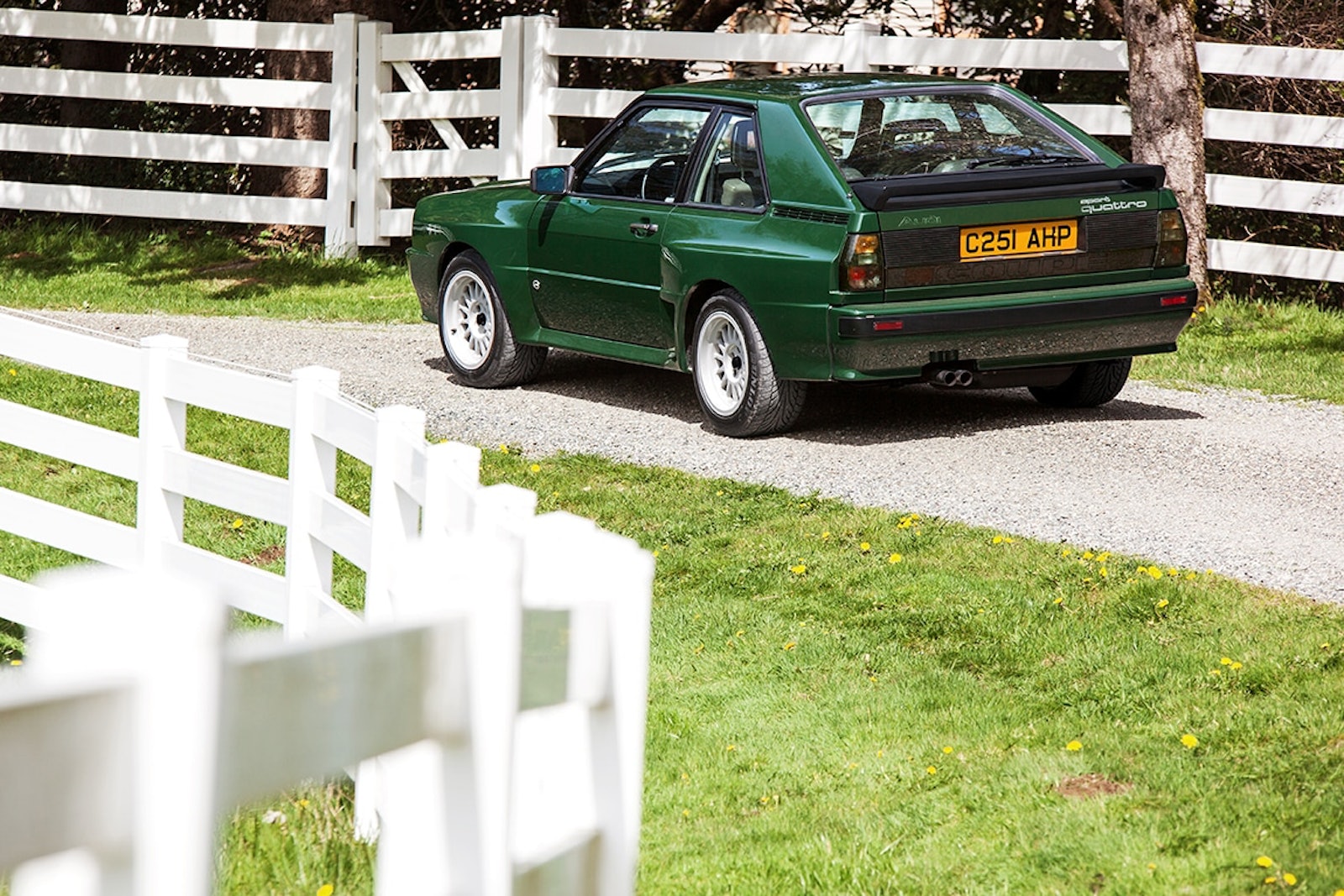 When most people think of Group B, they immediately imagine the 600 horsepower, fire breathing monsters flying down a rally stage with the likes of Stig Blomqvist and Hannu Mikkola behind the wheel. While the era did produce absolutely ludicrous cars that are a handful to drive, it also produced some utterly amazing and iconic cars. The Audi Sport Quattro is the perfect example of the Group B pedigree – with its incredible handling, impressive acceleration and timeless looks, it will continue to be one of the best drivers’ cars ever made. 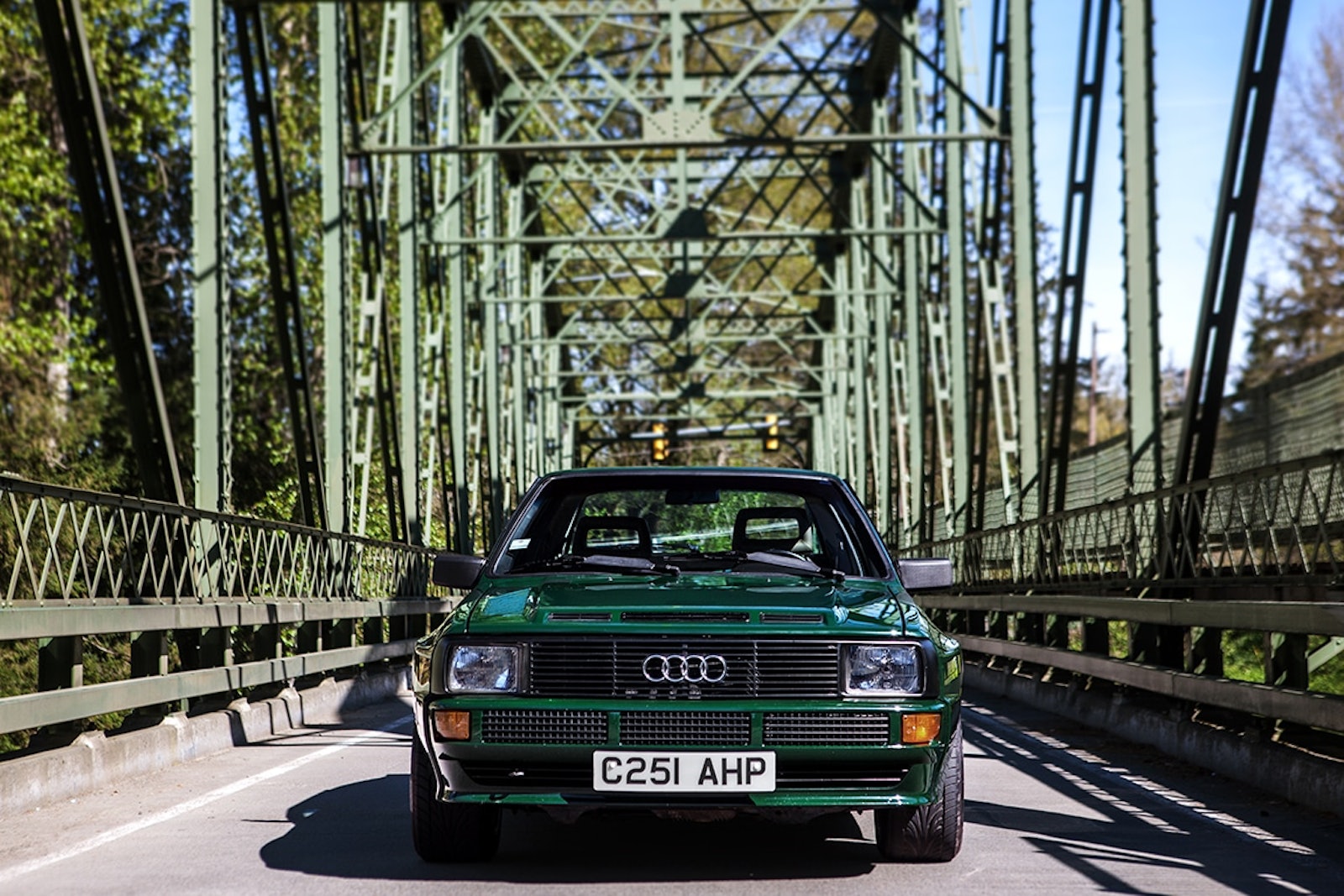 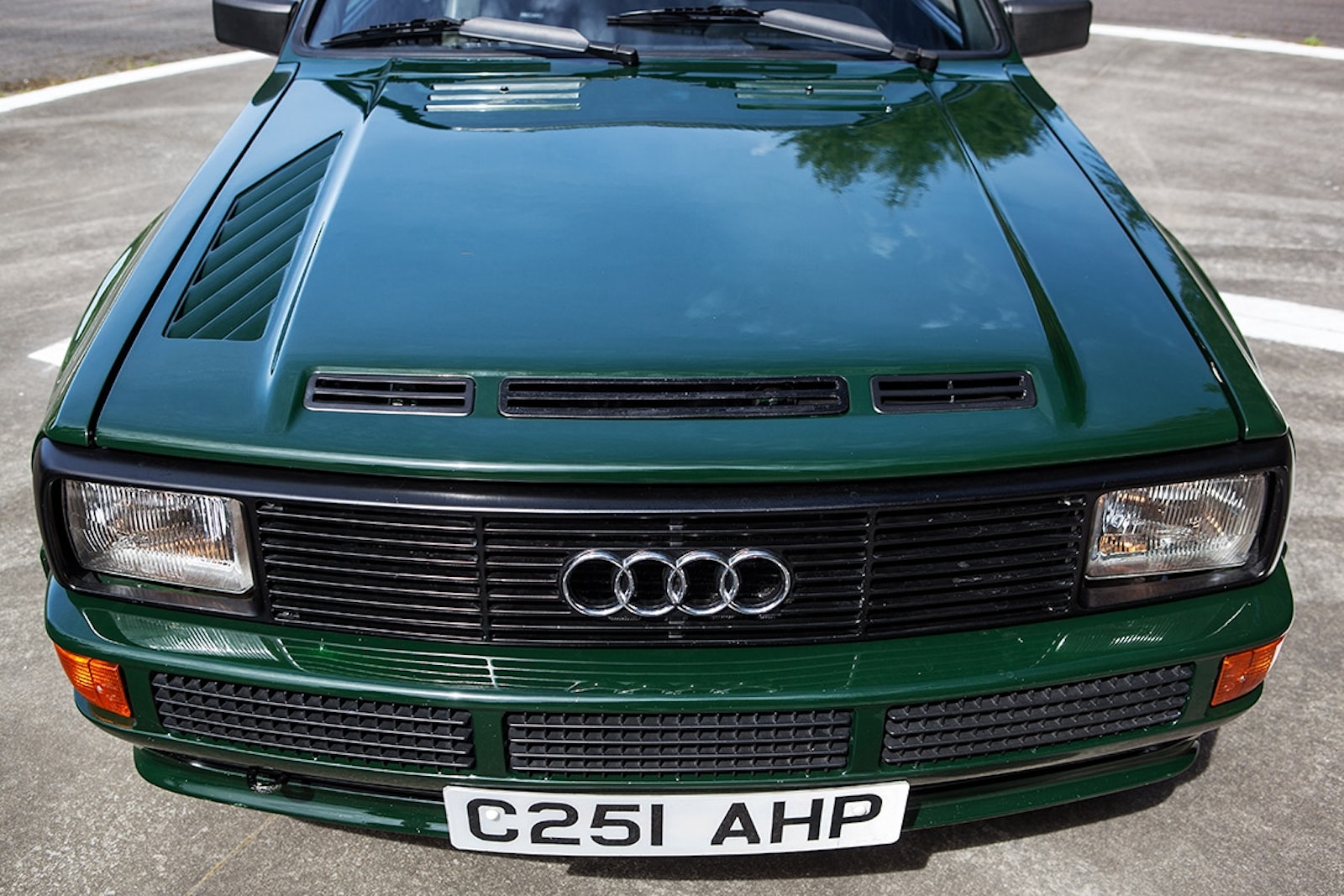 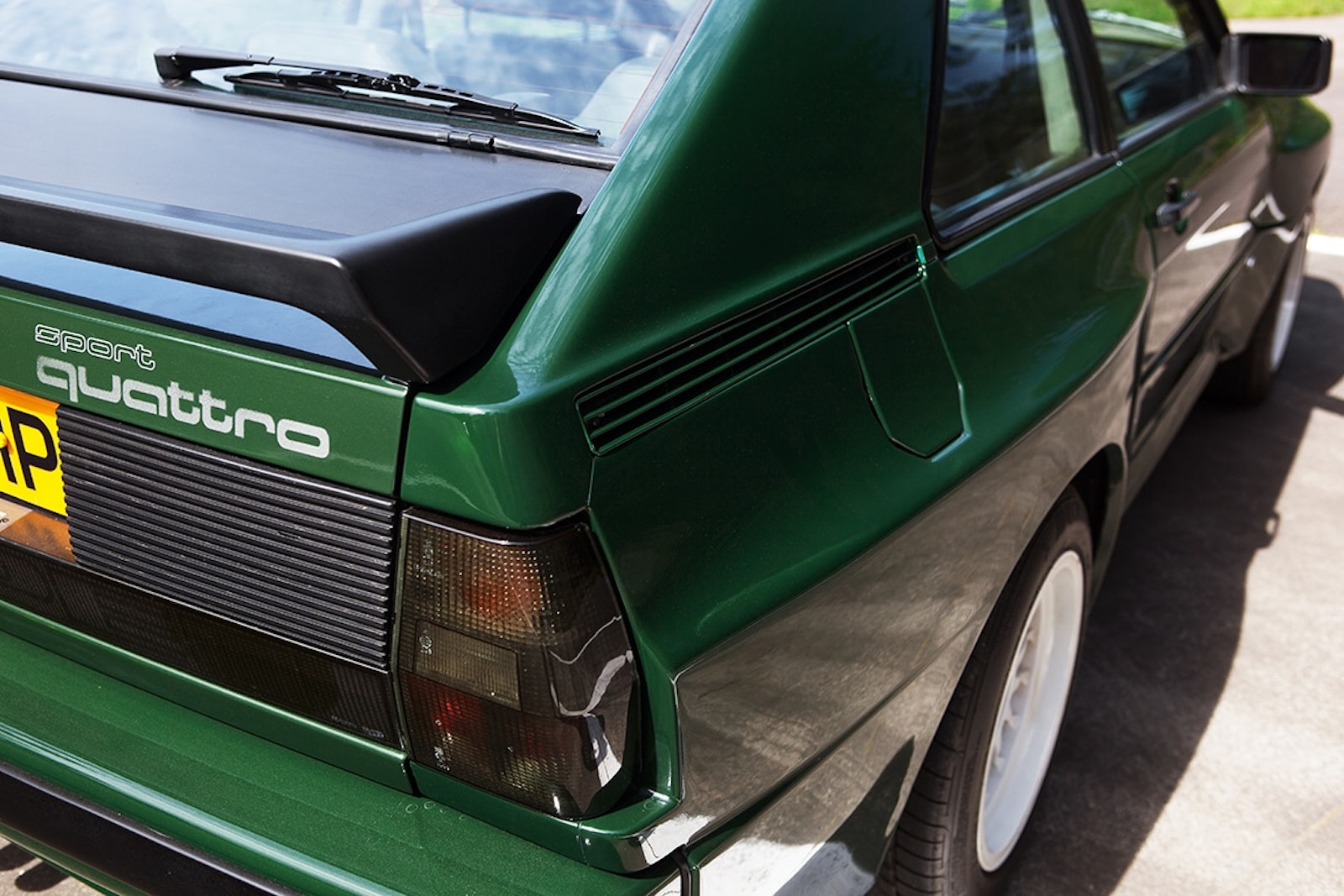 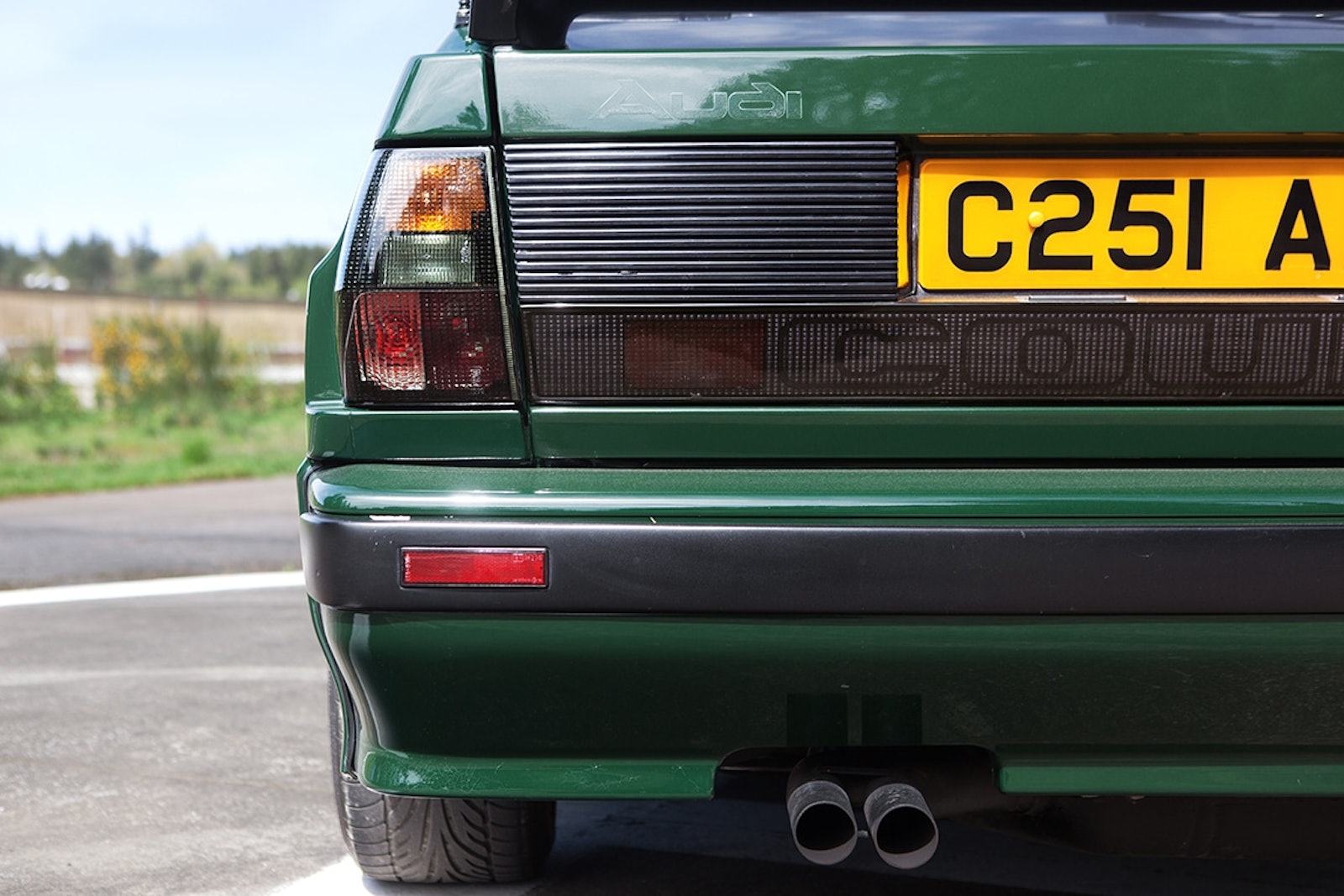