For DirtFish, the Seattle round was the biggest race of the year on the 2016 Red Bull Global Rallycross calendar. This weekend was Round 10 at the Evergreen Speedway in Monroe, Washington – an oval racetrack that is normally home to drift events, stock car racing and even school bus figure-8 races. GRC arrived one week prior to the race and put together an exciting track for the drivers and fans alike. Utilizing the existing banked turns from the large and small oval tracks, they added a very large, technical dirt portion, and of course, a 70 foot jump. All in all, these added up to a course that had a little bit of everything – long top-speed straightaways, extremely fast banked corners, hairpins that transitioned from pavement to dirt, and very tight, technical corners on both surfaces. Suffice it to say, this track would benefit the best all-around drivers.

Race weekend began for DirtFish and Subaru Rally Team USA with a driver meet and greet at the DirtFish Headquarters in Snoqualmie on Thursday eve. This event proved to both organizations how amazing the fans are! With only one week’s notice, more than 175 people came out to show their support for David Higgins, Chris Atkinson, Conner Martell and James Rimmer. It’s safe to say that we most definitely have some of the best fans around! 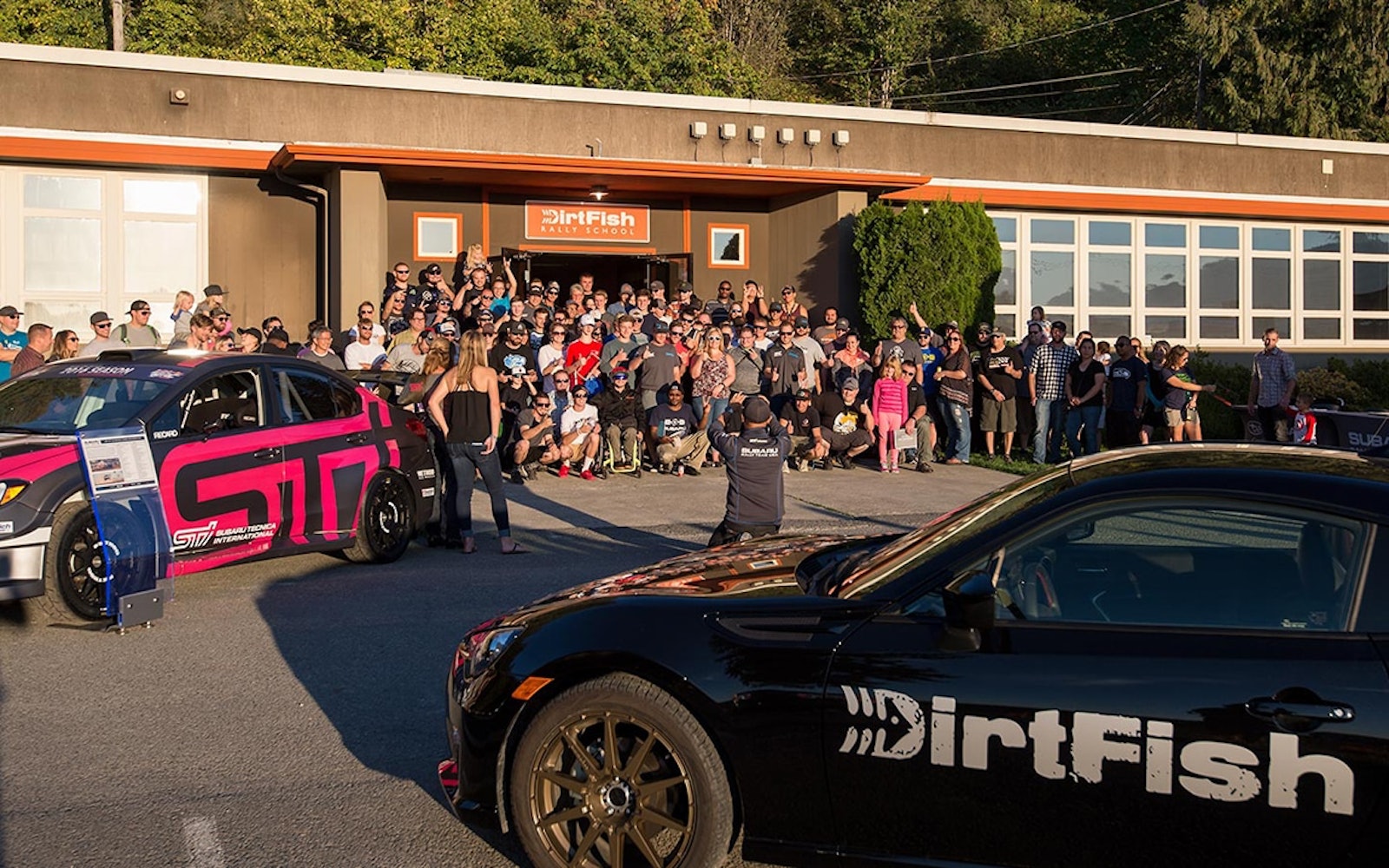 To take a quick step back, four weeks prior to the Seattle race, we made the decision to acquire a second GRC Lites car and run a two-car team for the remainder of the 2016 season. The driver chosen was DirtFish stage rally driver, James Rimmer. James has spent an extensive amount of time behind the wheel of multiple, different cars since he was able reach the gas pedal.

Not only did we add a car to our team, spectators and fans may have noticed a DirtFish branded Subaru Rally Team USA WRX STI on the track this weekend. Just as we have done previously, David Higgins was the chosen driver to represent the Subaru and DirtFish brands.

Are you starting to see why this was the biggest race of the year?! 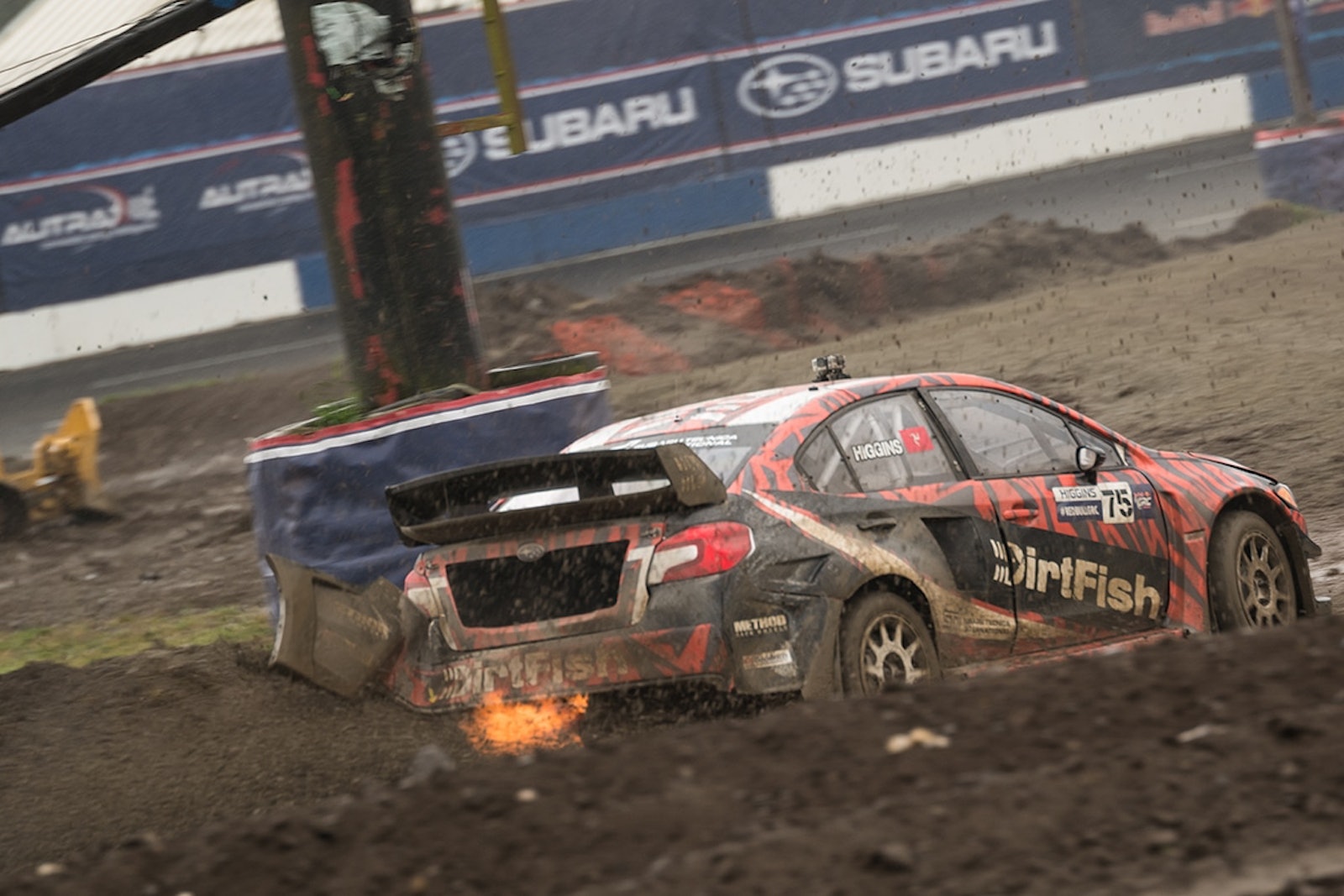 Friday was a beautiful Pacific Northwest summer day. With clear skies and the sun shining down on our team, conditions on the track were perfect for drivers to learn the ins and outs of the course setup.

Both DirtFish GRC Lites drivers, Conner Martell and James Rimmer were laying down consistently fast times during practice. Conner prevailed in qualifying, achieving the fastest time and edging out Dreyer Reinbold and Tanner Whitten by nearly half of a second. His top finish placed Conner in a prime starting position for the first of two heat races.

This would set the tone for Conner’s weekend. 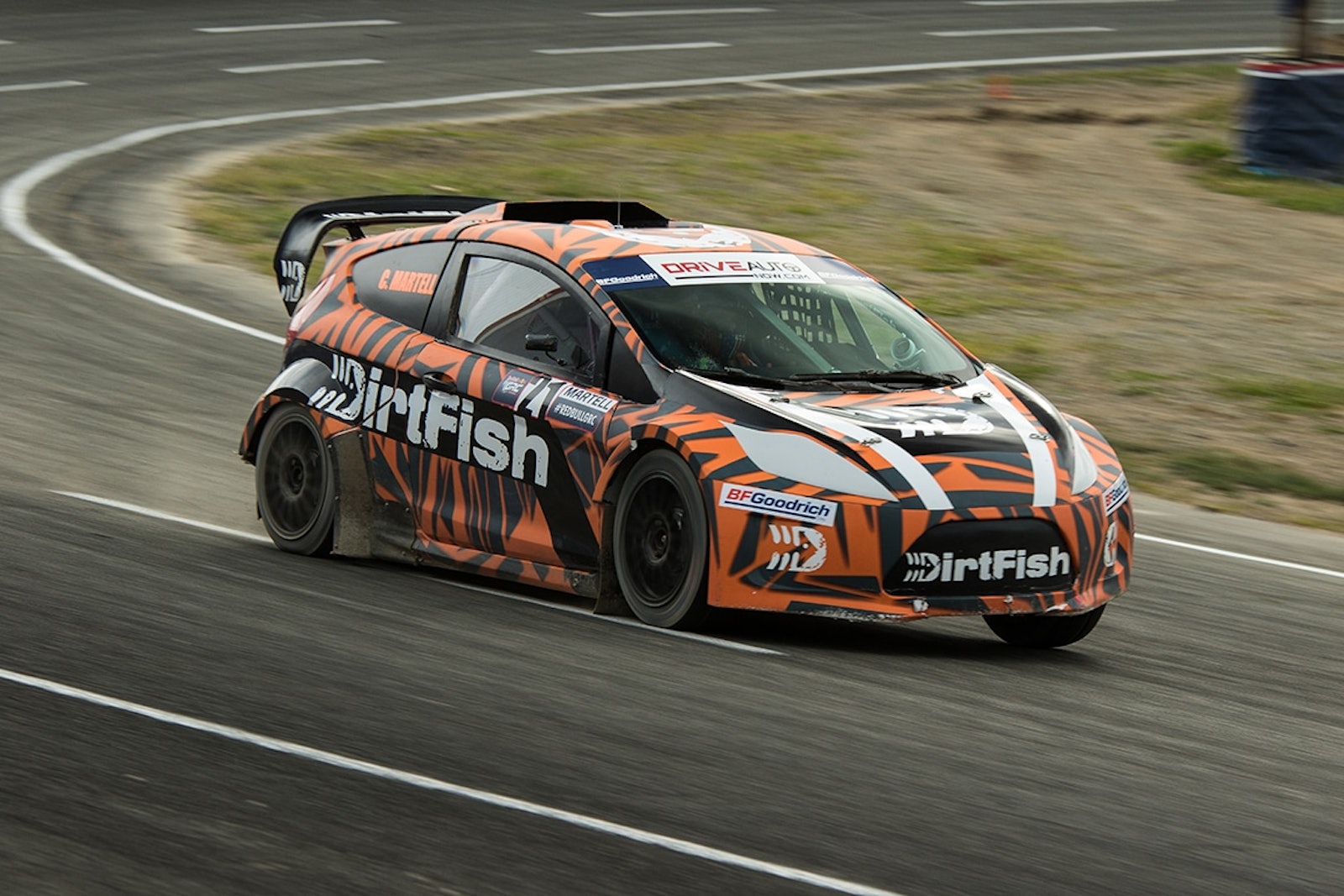 In Heat 1, Conner was up against 2015 GRC Lites champion, Oliver Eriksson, who is a very talented driver. The beginning of the race was a tight door-to-door battle between the five drivers, which became very eventful in turn 2 where two of the drivers had some very hard contact causing the race to be red flagged. After the restart, it was a tight battle between the top drivers. That was until Conner fought his way to the front; once he moved into P1, he pulled farther and farther ahead every lap, finally winning the heat by five and a half seconds over Eriksson.

This trend continued in Heat 2. Right off the starting line, Conner was neck and neck with Travis Pecoy. Conner was on the inside of the first corner when Pecoy turned in on him, making contact and ultimately spinning himself into the wall. Luckily, Conner made it out of there mostly unscathed, but officials made the decision to red flag and restart the race. After the restart, there was a close battle between him and AF Racing driver, Christian Brooks. Conner was able to hold Brooks off for the entire race, leading him to yet another heat win.

After winning qualifying and both heat races, the only thing left for him to conquer was the final race. 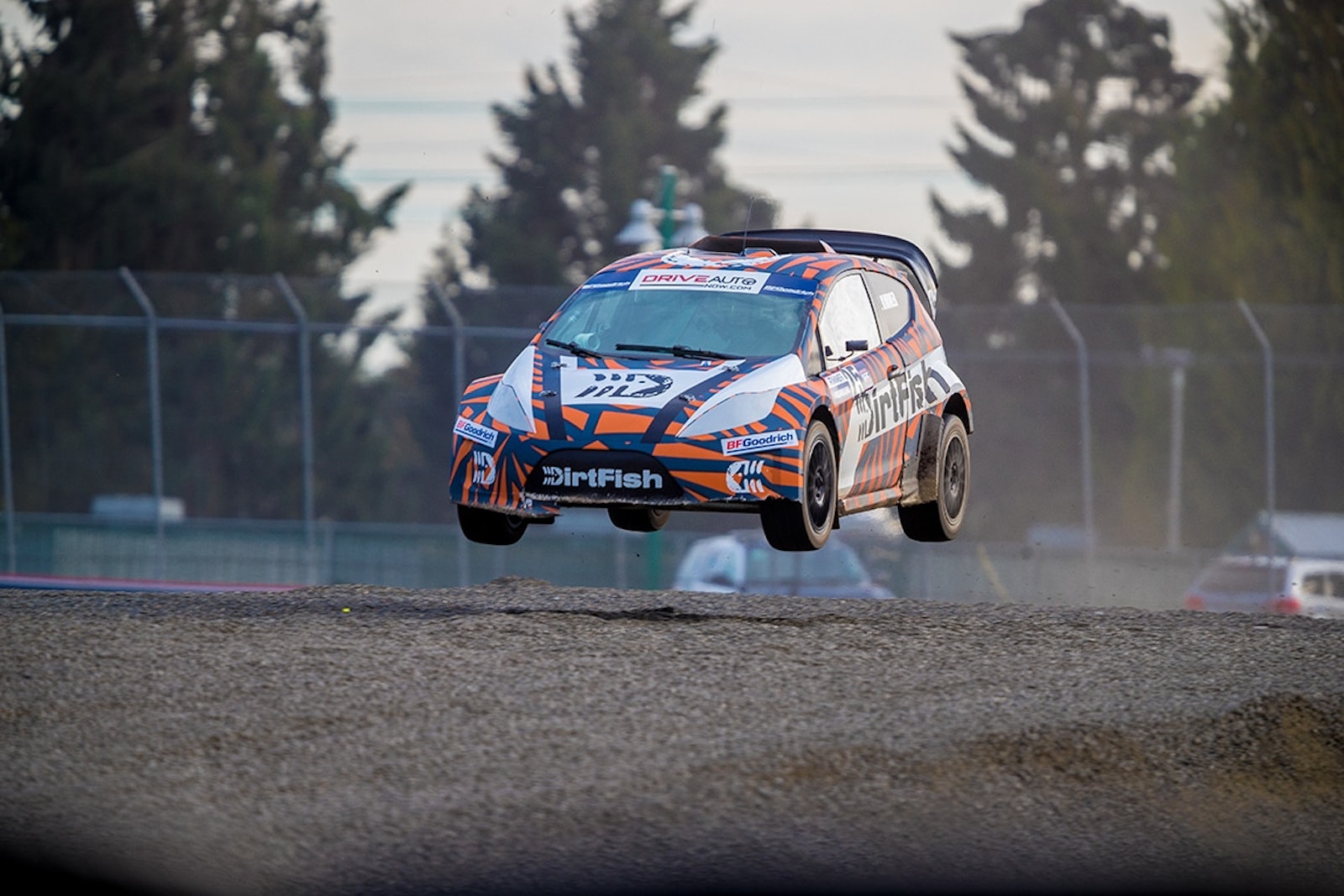 DritFish driver and Red Bull GRC newcomer, James Rimmer, had a great start in the last chance qualifier and got the jump on a few of the other drivers. Unfortunately, he was hit from behind going into turn 1 causing him to spin into the wall, ultimately ending his first weekend in GRC. James said, “This weekend was a great experience. It was my first time ever racing door-to-door, which definitely took some getting used to. I learned a lot and I am extremely excited to get behind the wheel again for the next race in Los Angeles. I am very happy about Conner’s win this weekend; it is fantastic to have a teammate who is so competitive and driven.” 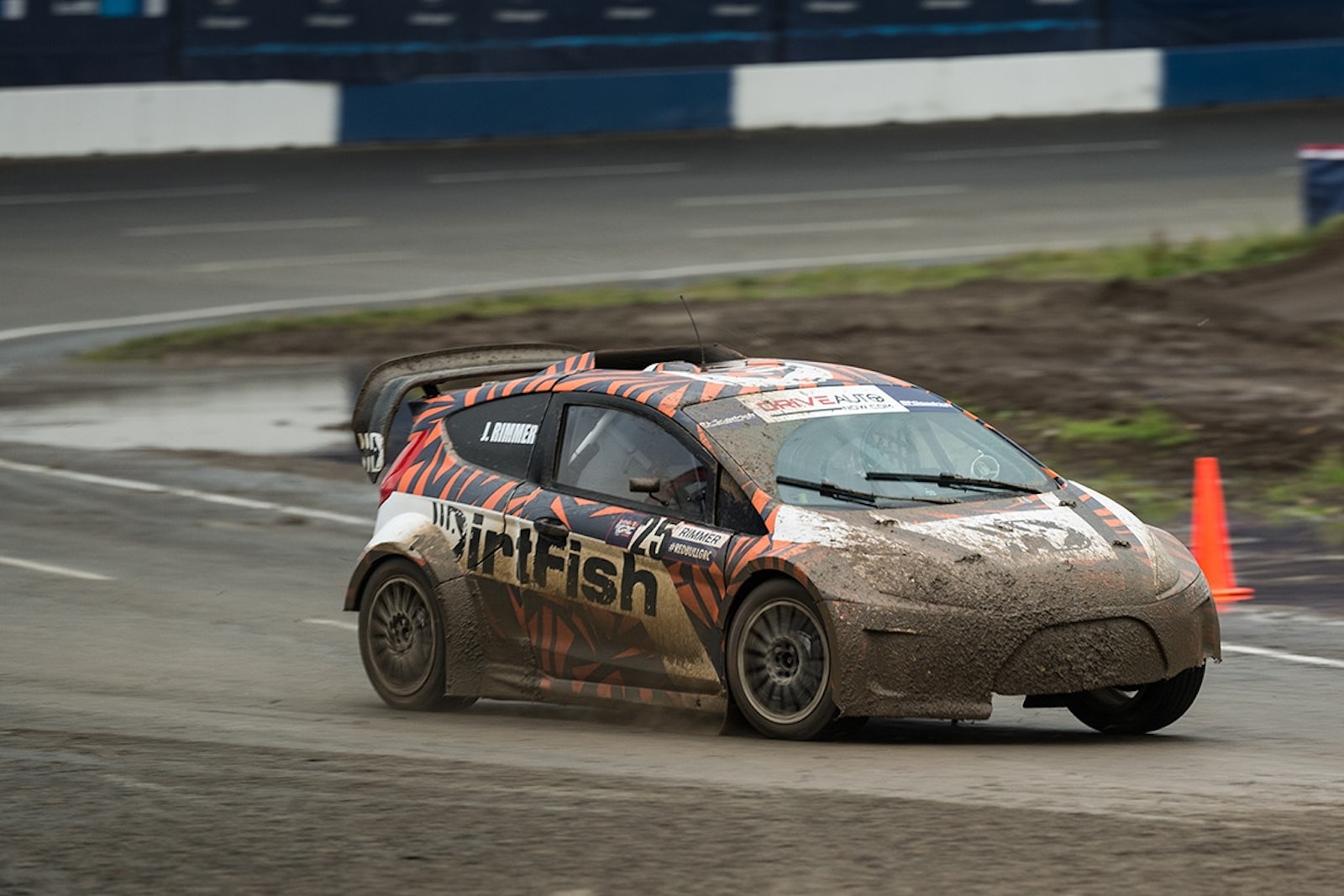 The main event was one of the best races we have seen from Conner all season. From the start, it was a neck and neck drag race with Oliver Eriksson to the first turn. Conner transitioned onto the dirt in the lead and began to put more and more space between him and everyone else, taking the joker on his second lap and essentially sealing the win for him. He led the entire race, putting down clean laps with no one else around him.

Compared to the previous races, Subaru really stepped up their game this race. David and teammate, Chris Atkinson, were able to prove that the SRTUSA WRX STI can be competitive with the rest of the cars in GRC, both making it into the final with a second and third place in the semi-finals. This is an exciting push forward for Subaru, SRTUSA, Subaru Tecnica International and all of their partners. 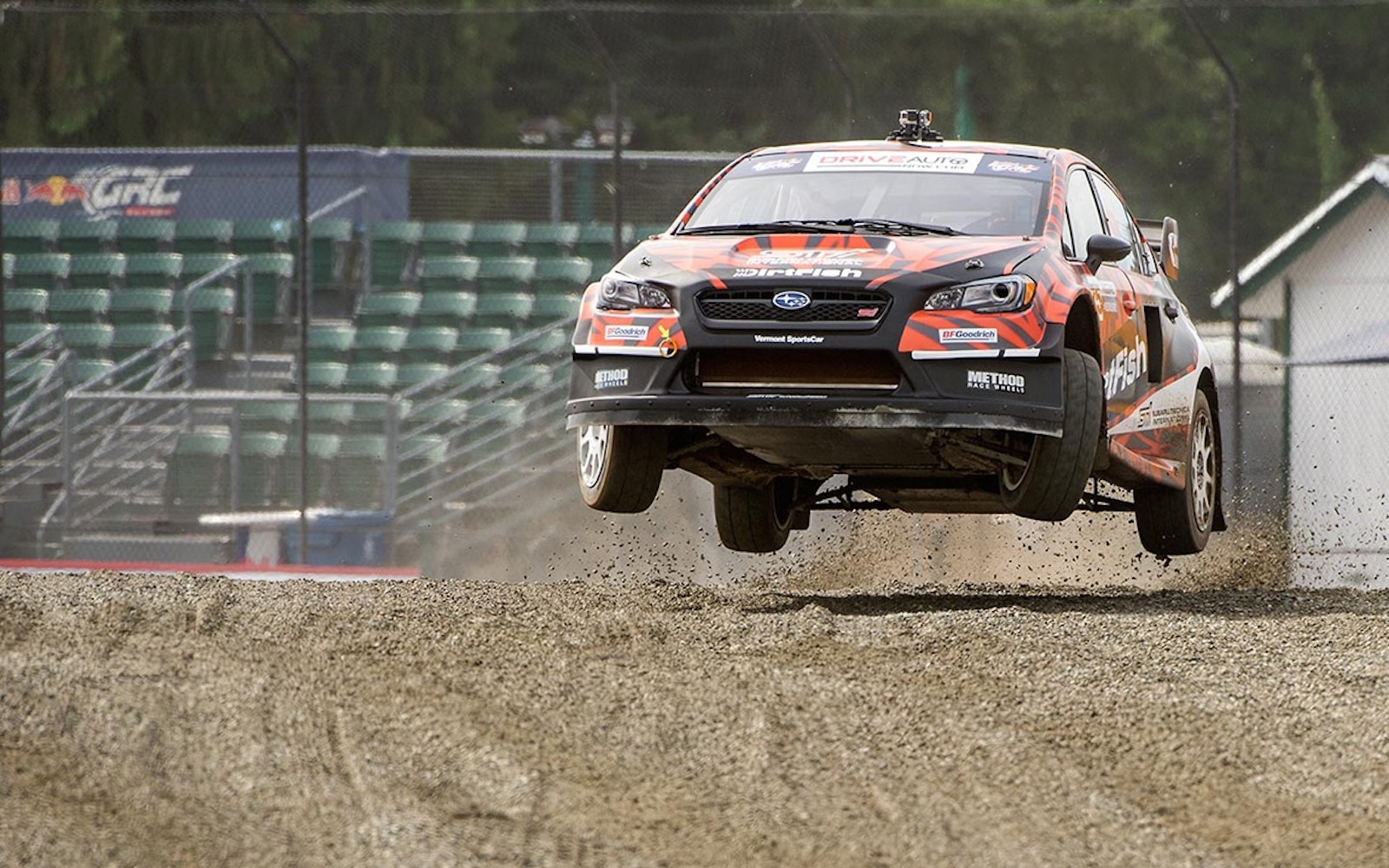 This weekend’s Red Bull GRC race ended up being everything the entire team and staff at DirtFish could have hoped for! Conner says, “Clinching this win in my team’s hometown is an amazing accomplishment for me and the entire DirtFish organization. We have been fighting hard since our last win in Phoenix, and I couldn’t be happier that I was able to make it happen right here in Seattle, especially in front of DirtFish’s largest fan base!”