Over the decade that DirtFish has been operating we’ve amassed quite the collection of vehicles for various different purposes.

One of our most notable cars is the DirtFish Motorsports Limited 4WD class Subaru Impreza WRX STI that instructors Sam Albert and Michelle Miller used to compete in a full American Rally Association championship season in 2018 – taking third overall in the National championship and second in the L4WD class.

While the car may not look like much more than a lightly modified Impreza on the outside, there’s plenty more that has gone into getting this car race ready and on stages.

Here’s a full breakdown on everything that has been done to the DirtFish Motorsports L4WD Impreza WRX STI.

While the factory STI in the US comes with the EJ25 2.5 liter flat-four, DirtFish has replaced this with a 2-liter EJ20. The sacrifice of displacement was mostly for reliability as the team has experienced the EJ20 to be a stronger engine that could handle abuse better.

The EJ20 is of course turbocharged, but again, not with the US spec parts. This car uses the Subaru VF36 twin-scroll turbo, which is what comes on the Japanese-spec STI cars. The twin scroll turbo is better in many ways, especially for creating more torque.

The intake has been shortened to both improve throttle response, and decrease the intake temperatures, feeding cooler air to the engine and allowing it to make just a bit more power.

Also to keep things cool, the intercooler – which typically sits close to the firewall in a stock STI – has been moved to the front to allow for better airflow; and to avoid any heat soaking that may come from the turbo, which would normally be right by it.

A custom built radiator is mounted right below the intercooler, and air ducting built into the hood makes sure that air stays flowing through the engine bay and everything stays as cold as possible.

The battery has been relocated to the back of the car to allow for more space under the hood as well as easier access.

A Motec M150 ECU takes care of running all of the engine components, and allows for a lot of customization and tweaking of settings from inside the cockpit.

The engine is linked up to a PPG sequential transmission to make shifting in the high-intensity world of rally easier by removing the need to clutch in and clutch out so the driver can keep their feet on the gas and brake.

With this transmission, gear-shifts can be completed as quickly as 30 milliseconds, which means more time with the wheels fully engaged, and less time with the drivers hand off the wheel to shift.

The interior is arguably the most visibly changed part of the car. The whole stock interior has been mostly stripped out save for a few plastic pieces.

A full ARA competition-spec roll cage has been installed, as well as OMP Safety racing seats and safety harnesses.

The steering column has been replaced with an extended one to make the car easier and more comfortable to drive in the racing seat.

The Motec ECU is hooked up to a key-pad on the inside that controls car functions from fans to lighting, and much, much more. This key pad basically replaces any button or switch that would be found scattered across the dash of a road car. 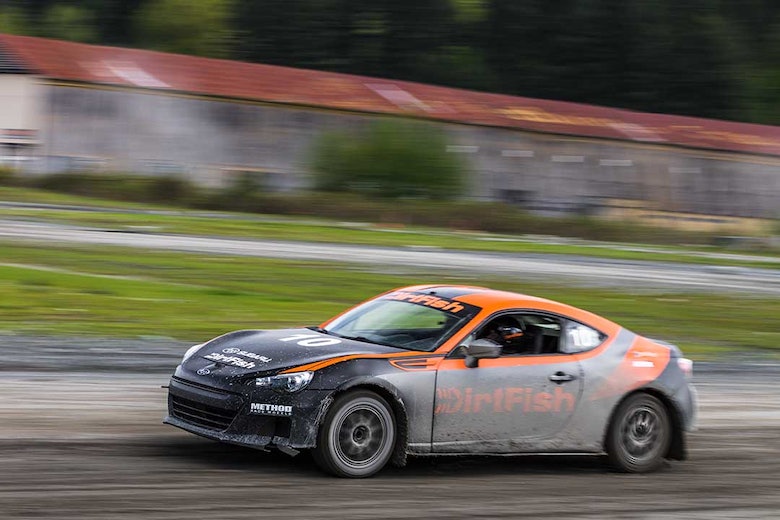 How to become a rally driver

The standard infotainment system has obviously been ripped out and becomes the perfect place for the ECU’s screen to be placed, feeding all of the information about engine and vehicle functions to the team in real time.

The ECU display makes anything on the dashboard redundant, and therefore a gear and shift indicator has been put in that space instead to allow for perfect gearshifts.

The pedals have been replaced with a floor mounted Tilton pedal box which allows for easier service and adjustments to be made.

Topping off the driver controls is, of course, the hydraulic handbrake. It wouldn’t be a rally car without the ability to easily get sideways, and this handbrake also disengaged the rear axles so that you don’t have to put the clutch in to use it.

The navigator in this car will feel quite at home as well. The passenger side is outfitted with a map light to allow for easy note-reading at night, and a Monit GPS which tracks mileage and speeds accurately while on stage and in transit.

Connecting the car to the ground is a set of 205/65/15 Hoosier gravel rally tires to tackle the dirt on US stages. This rubber wraps around 15-inch Method race wheels which are strong enough to withstand the harsh hits on stage.

The brakes can’t be too big in order to fit underneath the 15-inch wheels, so to upgrade the stopping power slightly larger rotors have been put on, but the big thing is the performance friction calipers and larger pad area to increase stopping power.

The brakes also have a separate master cylinder for each braking loop so that if something happens to the front brakes the rear brakes are unaffected and vice-versa.

Reiger racing suspension is utilized on the car to absorb all of the pitted roads and landings from jumps you can throw at it. This set-up also has a rebound-control valve, which can be used to keep the tires fully extended toward the ground as much as possible so the driver can maintain control.

Though most of the bodywork has to remain stock for the L4WD class, there are certain modifications done to the outside of the car to allow mostly for durability.

The hood has the air ducting as previously mentioned to keep air flowing through the engine bay, quite different from how the stock hood is set up. The hood is also held down by pins instead of the normal hood latch.

The wheel wells are all fitted with high density plastic fender liners that won’t get torn up by gravel at high speeds, nor will they blow out hitting a water crossing at speed.

The underbody is completely covered by HDPE plastic to keep vital parts from scraping the ground if the car bottoms out or getting damaged by anything else the car drives over.

The ARA also has a rule that driven wheels have to have mud flaps, therefore the car is also fitted with custom polyethylene mudflaps which keep gravel from getting thrown too far, and also help protect the wrap and body panels from getting torn up through a rally.

Bumpers are mounted on with a custom mounting system meant to hold them on much stronger than the stock bumper clips are able to.

At the back of the car, the factory wing provides extra downforce and stability at high speeds, and finally, the trunk is held on by four pins and comes all the way off thanks to the speaker tray being removed to help save weight.

All of this culminates in one fast rally car that comes in just above the minimum weight requirements.

With the right driver behind the wheel and the right navigator in the passenger seat, the DirtFish Motorsports Subaru Impreza WRX STI is a threat anytime it hits the stages.