Pappas & Beer and Lil Jon looking out over the Pacific. What could be better? What could possibly improve the prime carne asada tacos and the cold Coors Light while looking west and seeing nothing until China?

Ken knows. Ken knows what this stretch of Rosarito beach really needs. It needs all 1100 horsepower of his Geiser Bros G6 Trophy Truck ripping up a sandstorm.

And Ken Block’s more than happy to deliver.

The final member of the crew is Alan Ampudia. Alan owns Papas & Beer. But that’s not really why he’s here. Or it’s part of the reason why he’s here. Mainly, he’s here because he won the 2019 Baja 1000.

To the uninitiated, the Baja 1000 is a straight road race from Ensenada to La Paz along Mexico’s Baja California Peninsula. And it’s 1000 miles. Two years ago, Ampudia finished the race in 16h10m35s.

No wonder he’s on the team this time around.

And no wonder Block and the Hoonigans have dropped by his place to reveal their plans.

“Most livery reveals are pretty boring and underwhelming,” said Block. “With the addition of Alan Ampudia to the team, it was only right that we did this big and on Alan’s home turf.”

And the livery is special. Just like the Porsche 911 he’ll drive on the East African Safari in October, the colors on the Trophy Truck have come from the mind and the pen of Mexican artist Ricardo Gonzalez.

Ahead of the Baja 1000, Block and co-driver Alex Gelsomino will take the truck to the Vegas to Reno race in August.

“The ultimate goal with our whole team is trying to win the Baja 1000,” said Block. “So we are using this [August] race as further racing development, beyond all the testing and learning I am doing outside of the races. There’s a huge learning curve ahead for Alex and I, and we see this race as a big step in getting us ready for the 1000 in November.” 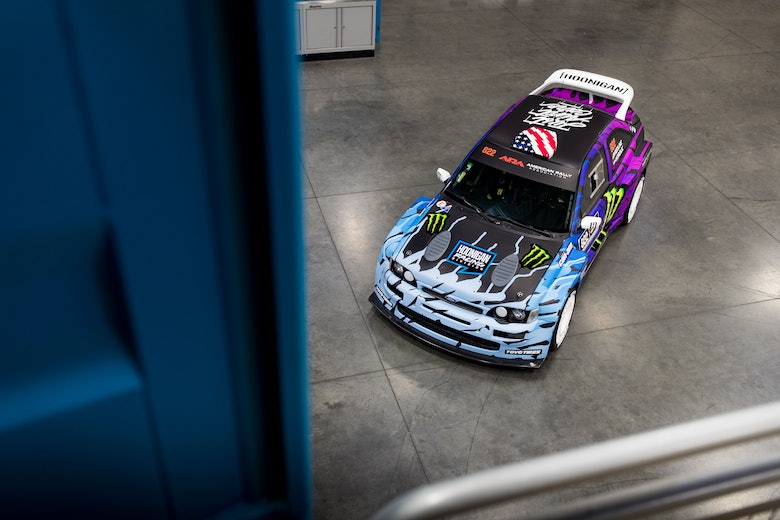 But before all of that, there’s the Maine event of this week, the New England Forest Rally. Block’s out in his Subaru WRX, Redline’s in the Cossie V2 and Ken’s wife Lucy is running the Ford Fiesta R2T in the north-eastern woods.

Predictably, there’s more to this story than just the cars – there’s the content.

The whole Baja 1000 odyssey can be followed in an eight-part YouTube series, appropriately named Whoopocalypse Now.

Have a look here for the launch recap with Lil Jon on the tunes. And Ken on the  beach. Or here if you want to track back to the Cossie V2 unveil with Redline getting in some happy stick practice.