Peterhansel, who started second on the road for the Bisha-Wadi Ad-Dawasir test after yesterday saying that a lower road position would have been preferable, showed impressive pace throughout the mostly sand-based stage and was just 2m35s adrift of Al-Attiyah at the finish.

As road opener, stage one winner Sainz had been progressively losing time to Peterhansel, and shipped over five minutes by the 218-mile waypoint of the 283-mile stage. The Spaniard had trouble finding a waypoint and then encounter a minor engine power issue caused by a loose seal towards the end.

Peterhansel now holds a lead of 6m37s over Sainz in the overall classification, while Al-Attiyah is just over nine minutes behind the Frenchman in third.

Having been first on the road and dropping over 11 minutes due to a puncture on stage one, Al-Attiyah used his superior road position for stage two to his advantage.

The Qatari was right with Sainz’s times at the second and third waypoints (at 28 miles and 58 miles respectively), closing to within two seconds at the latter.

Al-Attiyah, nicknamed the ‘sandman’ due to his prowess on the dunes and loose tracks, moved ahead of Sainz just after the halfway point before overhauling Peterhansel for the stage win.

The Frenchman set a series of consistent waypoint times and only dropped 10 minutes to Al-Attiyah by the finish to cement his fourth place in the rally classification.

Al Rajhi is currently sixth overall behind the Overdrive-run Toyota of Jakub Przygónski, who enjoyed a largely untroubled run through the stage.

It was a far better day for Sébastien Loeb in Bahrain Raid Xtreme’s Hunter BRX1. Loeb lost over 22 minutes on Sunday’s opening stage after suffering three punctures, having to change two inside the opening section, which he described as ‘hell’.

He started the second stage 18th on the road following overnight penalties for other competitors and quickly found the rolling dunes and fast sand sections to his liking.

The nine-time World Rally Champion set the sixth fastest time in the stage alongside co-driver Daniel Elena and is currently seventh in the overall classification, 36m40s behind Peterhansel.

Loeb’s BRX team-mate Nani Roma was also getting to grips with his new 4×4 and had looked like putting in a similar performance to the Frenchman, until the double Dakar winner lost over 15 minutes by the final waypoint. 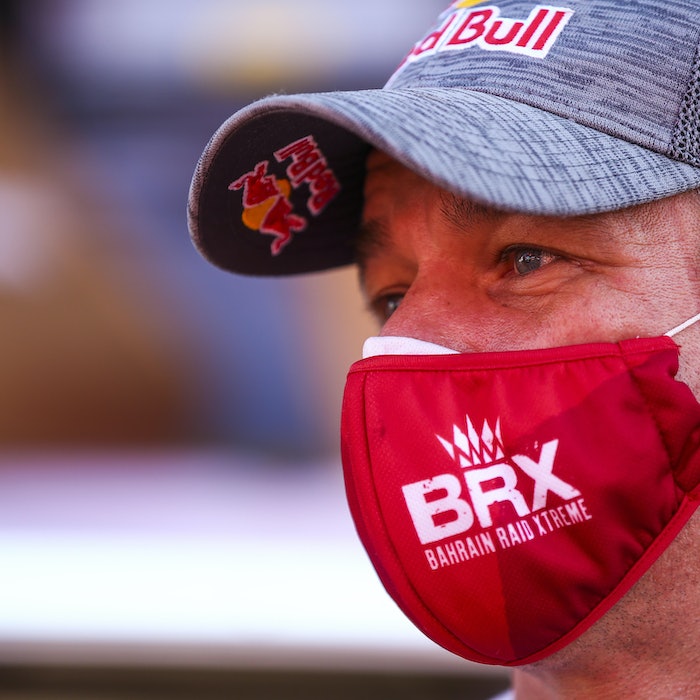 Much like Roma, a number of other erstwhile top contenders also hit trouble at the end of the second stage.

After an impressive opening stage on Sunday, Orlen Benzina Team’s Martin Prokop lost 28 minutes as his Ford Raptor RS hit strife, while local driver Yasir Seaidan’s terrific early-stage form was undone when the Saudi lost a similar amount of time ahead of the final waypoint.

Seaidan had been setting the fourth fastest time in his SRT Racing Century CR6 but slipped down the order.

Sheikh Khalid Al Qassimi was another driver to have dramas in his Abu Dhabi Racing-run Peugeot 3008DKR, shipping nearly 24 minutes in the final section.

Roma lies 10th ahead of stage three tomorrow, while Al Qassimi, Orlando Terranova – who suffered issues in stage one – and Prokop follow. Seaidan dropped to 15th in the overall standings.

The first day in the dunes caused trouble for Peugeot privateer Cyril Desprès who got stuck in the sand late in the stage, losing nearly half an hour.

The same fate afflicted Toyota Gazoo Racing’s Henk Lategan who found himself alongside Desprès in the same dune. The South African dropped 18 minutes early in the stage before losing another six towards the end.

Lategan’s TGR team-mate Giniel de Villiers lost a lot of time in the stage, and as a result, has dropped down to 18th overall.

Sportscar veteran Romain Dumas fared worst of all as he spent six hours repairing his Rebellion buggy in the dunes.

Dumas was another to get stuck in the sand and was forced to dig himself out. However, after managing to get into reverse, the Frenchman was hit from behind by Marcelo Tiglia Gastaldi’s Century Racing CR6. That contact ripped the right-rear wheel off Dumas’ car.

Francisco Lopez Contardo continues to lead the way in the T4 class of the SSV category but is only 39s ahead of the Monster Energy Can-Am partnership of Aron Domzala and Maciej Marton.

Alsaif, who struggled to 11th place in the opening stage of the rally on Sunday, found his form on the dunes and won the stage by 1m40s from Gerard Farres Guell.

Farres Guell remains third in the overall classification, just over a minute adrift of Lopez Contardo.

Early T4 leader Austin Jones slipped down the field after losing seven minutes towards the end of the stage. The American is now eighth.

In the T3 class, overall leader Cristina Gutierrez and Seth Quintero were embroiled in a stage-long battle with teenager Quintero claiming his first Dakar stage win by just over two minutes.