The news that Audi will field all three of its new RS Q e-tron E2 cars on next month’s penultimate round of the World Rally Raid Championship is significant.

Significant, because the Q Motorsport-run operation is ramping up its preparations for the 2023 Dakar Rally some two full months earlier than its maiden effort last year.

That’s to be expected, of course. Logistically, January’s Dakar was a race against time just to get there. But when it got there, it was mighty fast and gave plenty of teams in the bivouac food for thought for the rest of the year.

Since then, Audi has been working immensely hard behind the scenes. Or rather, at its headquarters in Neuberg, Germany.

You see, while the likes of Toyota Gazoo Racing with four-time Dakar winner Nasser Al-Attiyah, and Bahrain Raid Xtreme with Sébastien Loeb, have been going hammer and tongs in the W2RC, Audi has been quietly developing the latest iteration of its T1U class machine.

The E2 has undergone an initial roll-out in Neuberg, then a first test in Zaragoza, Spain. Now, it’s just completed its first endurance run in Dakar-like conditions, with an extensive test in Morocco.

“Well, we woke up quite early in the morning to make the most of the light that we were able to, and then we did a simulation of a Moroccan stage,” explained Audi’s project leader of track operations, Arnau Niubó Bosch.

“First of all, when the temperatures were a bit lower, we did a long run, which could have been around [the distance] of half a Dakar stage [in length]. And then, after lunch, we tested different setup options, close to our base camp.” 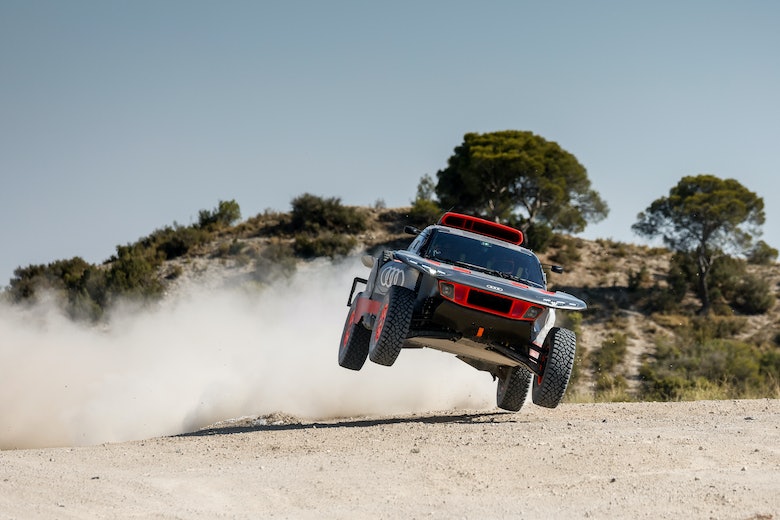 Niubó Bosch says there were two main objectives for the test.

“[We have been] developing the second evolution for the Dakar Rally and to familiarize the driver teams with the new developments. The weight reduction creates new opportunities for suspension set-up, which we want to exploit. We are moving in a good direction. The electric drive with all its systems is also working more smoothly than at the test a year ago.”

That’s the bit which should keep the likes of Toyota and BRX on their toes. The Hilux and the Hunter are very impressive pieces of kit, and they will no doubt take some beating on the Dakar when it kicks off on New Year’s Eve.

But there’s a new contender in the mix and, the most concerning aspect…it’s ready to race now.

“Each time I jump in the car, I always say ‘woah, it’s so good that it’s impossible to stop driving it!’

“When we drive through long, fast corners, there are fewer centrifugal forces. So, it’s much easier to stay on the inside of the corner. Likewise, our seating position is better than before.”

Quite how the Audi will perform vs the current crop of rivals will only truly be seen on the Dakar itself, but the upcoming Rallye du Maroc may well give us some indication of where it stacks up.

The FIA is in charge of the Equivalent of Technology, the EOT, and Audi’s arrival on the scene has already caused some division within the bivouac.

Toyota believes tighter regulations on power and weight need to be implemented to stop Audi running away with the Dakar, while Audi has recently complained about its car being nearly 100kg heavier than their Japanese rivals.

“The T1-Ultimate class which Audi is in, is a bit of a concern as the whole thing is a bit cloudy on where the performance levels of these cars need to be,” Toyota’s team principal Glyn Hall told DirtFish at the end of the 2022 edition.

“But for us and the T1+, it’s absolutely fantastic.”

Although some focus will be on how Audi fares on its first competitive run with its new cars, the Rallye du Maroc will be a crucial event in the context of the World Rally Raid Championship.

BRX’s Loeb leads the standings by one point from the Toyota of Al-Attiyah, despite not claiming a victory in either the Dakar or the Abu Dhabi Desert Challenge. Stage points have largely contributed to Loeb’s advantage with two rounds left in Morocco and Andalucía.

Get to know DirtFish Rally School