Not every driver got the same chance to shine in the inaugural Extreme E event, whether that be through car issues, crashes or a deeply rutted desert course limiting the scale of commitment for those who ran later in the qualifying sessions.

However enough running did take place in the Desert X-Prix to rate each of the nine crews that took part in AlUla, Saudi Arabia. Have your own thoughts on how the teams did? Comment here or share your thoughts with DirtFish on social media.

Fastest through Saturday’s accumulated qualifying runs by 4.7 seconds from the X44 car, the tall Swede and less tall Aussie were hit by a penalty for speeding in Q2 which dropped them back to second. Taylor takes the DirtFish award for the most committed approach to the back straight, her control as the rear of the car looked to overtake the front was immense. As was their progress through Sunday.

Not to be outdone in the commitment stakes, Kristoffersson laid the foundations for the team’s semifinal win with a daring run around the outside of turn one. There was more of the same as he outmuscled Hansen in the final. Taylor was inch-perfect on the second stint in both races, absorbing the pressure and delivering drives which demonstrate her ability at the highest level.

Hansen’s run through Q1 was one of the highlights of the event. Quick, committed and brave, he hung on to the Odyssey 21 as it charged up and down the dunes to go around the lap quicker than anybody. Munnings was also a revelation on Saturday morning. The Englishwoman was handed the car with a right-rear losing pressure quickly and, within a mile or so, it punctured. Her efforts in keeping the car in a straight line were no less merit-worthy than Hansen’s.

At that moment, the podium’s second step seemed a very, very long way away, but the pair of them stayed out of trouble, kept the car on the right line – apart from a brief sideways moment in the final which arguably opened the door for Kristoffersson and cost Hansen the lead. A superb debut for the Anglo-American team.

If David Richards hadn’t turned on the television this pairing would never have made the podium at round one. Prodrive’s chairman caught coverage of a rally in Andalusia and saw Gutiérrez doing very, very well. He made a call and had her signed her for five years. And she’s good. She knows rallying and has finished Dakar. She’s a very safe pair of very fast hands. Her team-mate? He’s pretty handy on the loose too. So it came as no surprise to see X44 top qualifying and lead into Sunday. Second in the semifinal meant a spot in the final, where powersteering failure ruined any hopes of anything more than third.

At a time when Loeb has faced – in my opinion – entirely unfair criticism for deciding to drop Daniel Elena, it was fascinating to hear him pipe up at the end of the press conference, to talk in glowing terms about Gutiérrez’s progress and potential.

A powersteering problem meant Sainz could only complete 1.73 of the 5.48 miles at shakedown. The two-time World Rally Champion was deeply unimpressed and took, by his own admission, a full hour to talk himself down and make himself understand the bigger picture and the journey his team has joined. Third fastest in Q1 allied to second quickest in Q2 meant progression to the semifinal with a clear shot at the final. That went south when he lost out to Loeb in a turn two tussle. Talking to Sainz at shortly after eight on Sunday morning, it was hard to believe his weekend was run. All done.

“And now, nothing,” said the doleful double world champion.

But his team didn’t leave with nothing. The experience his fellow driver Sanz took was superb and the Spanish off-road motorbiker was one of the women whose star shined brighter and brighter as the event progressed. Sanz was efficient and completely competent.

Having watched a couple of their rivals trip up in qualifying, the Anglo-Spanish pairing decided on a policy of keeping the car in the middle of the road. Zonca was, however, adjudged to have taken too much speed in the switch zone which left them with a 75-second penalty. On race day, Bennett lost out to Hansen and Jenson Button off the line, but the Bristol-born racer showed his fellow South-West Englander the way into turn two and snatched second, holding it for the remainder of the race. Bennett and Zonca both delivered consistent pace and ended the weekend three points ahead of Button’s squad and just six shy of Sainz’s team. By Bennett’s own admission, he would settle for that on the opening round of this all-new championship.

Definitely one of the most anticipated entries to the XE setup, JBXE struggled with an electrical glitch for the first day-and-a-half. Changing the front motor and inverter on Saturday lunchtime seemed to stop the car cutting out at the most frustrating of moments. Both drivers knew this was going to be a step into the unknown, but it’s probably fair to say the challenge was bigger than either expected. They’d tested in Rheola, South Wales in the wet and the feeling from the Odyssey on the Middle East’s sand was so, so different from what they found in Walters Arena.

Both are quick learners and they will, doubtless, take a step in Senegal, when the terrain will be more beach-like and a little less intimidating.

Saturday was dominated by Hürtgen’s vicious-looking roll after the car popped out of some ruts and stepped out on the German in a fast right-hander. Any points dropped by Hürtgen are won back by Ekström’s work ethic to get the car back up and running – for once DirtFish left him in peace as he got his hands dirty on the re-prep.

When he saw LeDuc’s Ganassi car piling into the back of the fruits of his labour, he must have wondered why he’d bothered. You couldn’t help but feel for Hürtgen, who doubtless heads home with unforgettable memories of the XE opener. For his part, Ekström delivered his trademark pace and precision, looking entirely self-assured behind the wheel. Is three out of 10 a bit harsh? Possibly. Let’s make it a 3.5. Or a more round four. We definitely don’t want to rub salt into wounds here and Ekström did keep DirtFish entertained with stories of him and Kristoffersson sharing a room onboard the St Helena. The first time they’ve roomed together since 1999, apparently.

So much for the perceived favorites (and they were our words, not theirs). Price’s electrical fault was the first fail for the Spark-built car and the talk of Friday morning. LeDuc’s crash was the first XE shunt and the talk of Friday afternoon. Saturday’s first qualifying run was hindered by a powersteering problem which might or might not have been a legacy of the accident damage. Despite the team’s best efforts, it couldn’t solve the problem in time for second qualifying and that meant it would go head-to-head in a two-car shootout (Veloce was already sidelined) with Abt Cupra.

Making more history, CGR was the first team to have its female driver be the starting driver in race, with Price taking on Ekström in Sunday’s third race. The American got the better of the Swede off the line, deploying hyperboost early, but losing out when Ekström pushed the button to use his a corner later. LeDuc’s deployment of full power for four seconds was saved until he had Hürtgen in his sights. Shortly after, he had a windscreen full of dust and Abt’s Odyssey.

“I made history again,” LeDuc told DirtFish. “The first person to crash into another car. That was a tough weekend.”

Ironically the Veloce car suffered considerably less damage than fellow Saturday roller ABT Cupra, but Sarrazin’s shunt dinked the top of the cage’s main hoop and that was the end of the game. After months of preparation, the whole team deserved an awful lot more than this – especially Chadwick, who had jumped a considerable distance from her comfort zone and was standing, suited, booted and ready to rock when her team-mate rolled. The Arabian desert’s a very long way to go for a five-mile drive through the dunes.

Sarrazin’s a resilient chap and he and the whole team will bounce back in Senegal for round two after not even registering a round one qualifying time. 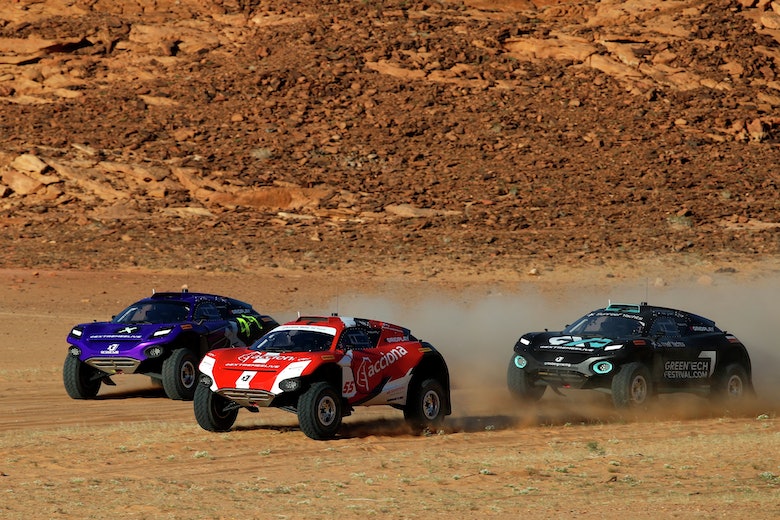 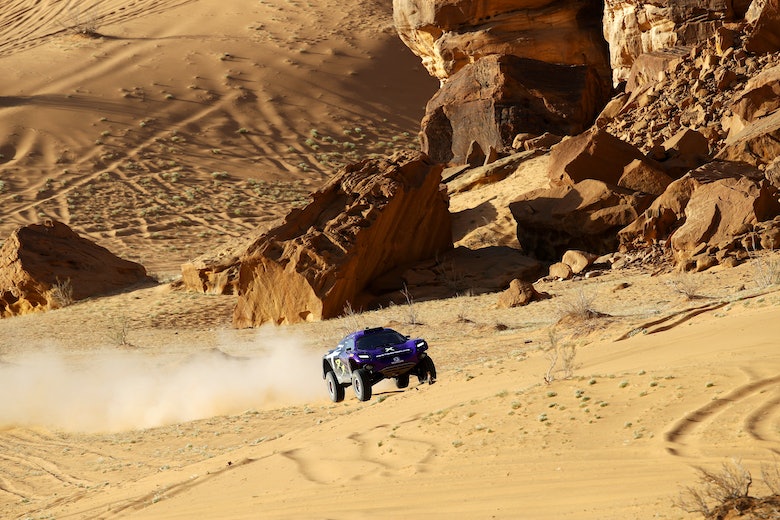 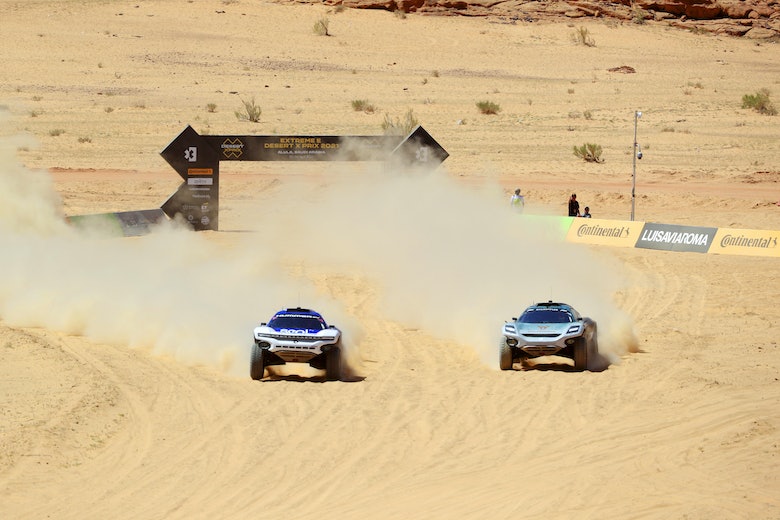 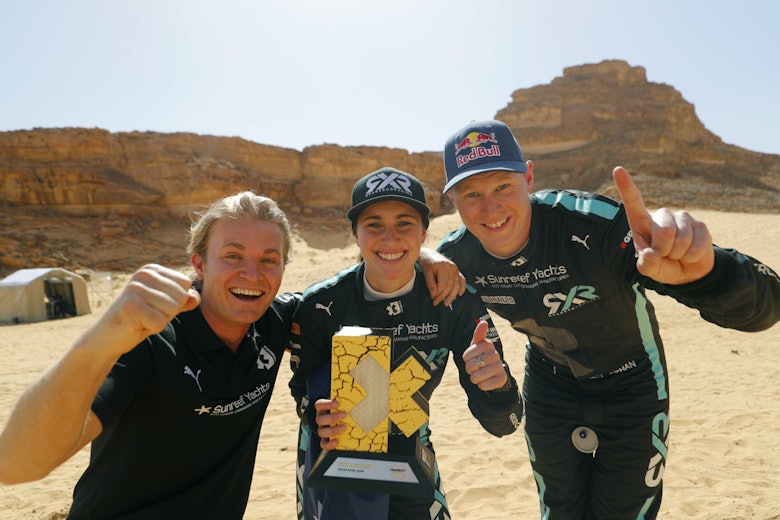 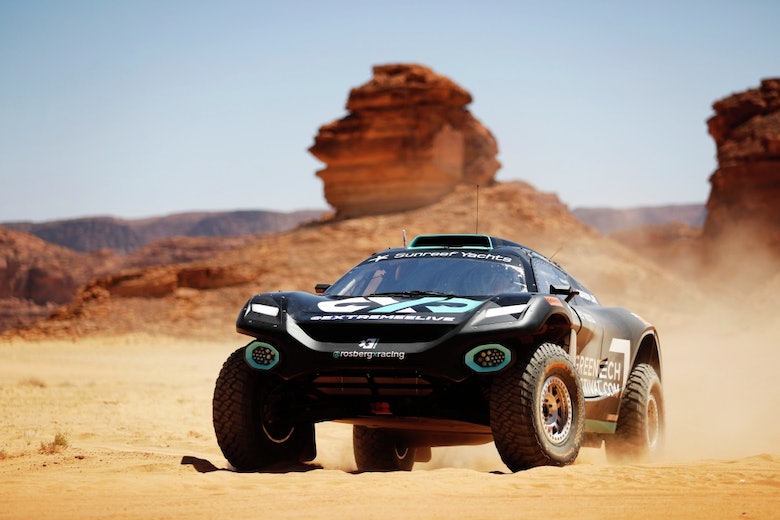 RXR on top after XE semifinals