After not completing a single lap in Saudi Arabia, Senegal presented Veloce Racing with the perfect opportunity for a redemption story, an opportunity that the Anglo-French team grabbed with both hands.

In a final where merely surviving was a trial in itself, Jamie Chadwick and Stéphane Sarrazin held on to claim second place, finally getting them off the mark for the season.

Key to the weekend? Damage limitation – a given since what appeared to be a relatively minor bit of damage took them out on the first lap of qualifying in the season opener.

“This weekend the plan was to really not make any mistakes,” Sarrazin said after the final. “We’ve improved the set-up of the car run-by-run and we need mileage, we need to learn the car, and the team do also.

“We are happy, it’s just amazing.”

Chadwick said that lessons had been learned when it came to approaching the weekend that paid off on in Lac Rose, and it was those lessons, rather than outright pace that yielded results.

“It was just quite a well managed weekend,” she told DirtFish. “We definitely didn’t have the outright pace to be P2, but in comparison to Saudi where we just didn’t manage it well at all.

“We sort of learned our lessons and managed this race a lot better.

“It was very much ‘get the laps, learn as much as we can’,” she added. “[With] Our car set-up, we lacked quite a lot of laps in Saudi so our car set-up was constantly evolving over the weekend and we needed the laps to be able to do that.

“And to make no mistakes because I think the championship’s such a battle of attrition. We saw so many people have issues and I think by not having any issues it played into our hands this weekend.” 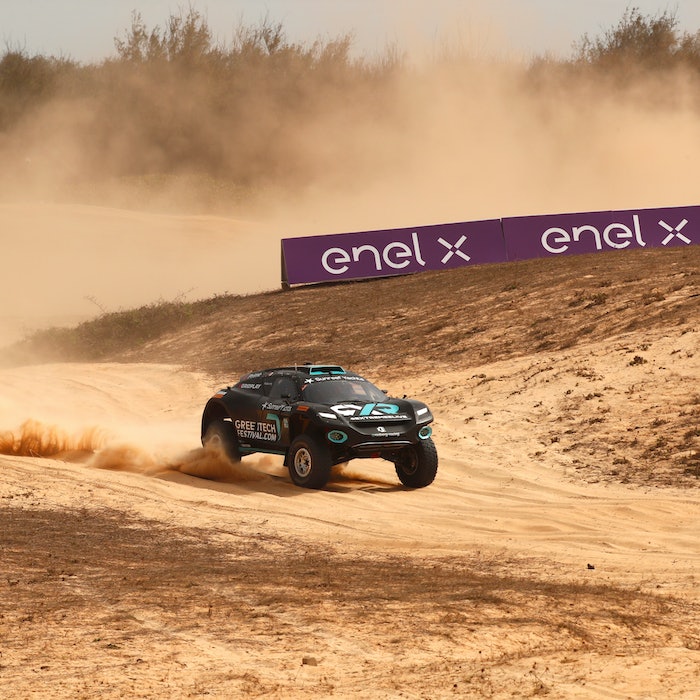 Kristoffersson and Taylor claim second XE win in a row

While Sarrazin has off-road experience in the World Rally Championship, for Chadwick – a W Series and British GT4 champion – it remains a whole new world, and attacking the never-ending bumps of the Ocean X-Prix course came mere days after she tested her W Series open-wheeler in Anglesey, Wales. A week couldn’t be more contrasting.

“It’s still bizarre to me, but I’m learning so much and I love the challenge,” she said. “To be lined up against the likes of Johan [Kristoffersson] at the end then for me is something I’m – it’s such a new challenge and I’m just enjoying it so much.

“We’re not where we want to be on pace, but still the challenge and everything else is so enjoyable.”

With points now on the board – and a lot of them at that – attention now turns to the rest of the season, and Veloce’s zero-to-hero season so far, plus opposing fortunes for some of the championship’s top runners provides hope going forward.

“I think it just shows how this championship is so unpredictable, there’s so much that can happen,” she said.

“Obviously Rosberg [X Racing] have a lot of pace, but everyone else, they’ve all stumbled across a lot of issues over the course of the last two races.

“So anything can happen and I think the way that the weekend was managed by our team was really nice and we rewarded them with a podium.”

Veloce’s team principal Rupert Svendsen-Coook added: “The car rebuild only took place last week in Dakar itself and from there on in we’ve done a clinical job to follow through on our plan, which after learning the harsh lessons from our debut, was to finish the weekend whilst increasing exposure to risk with every session.”