David Higgins has hailed the strength of the American Rally Association presented by DirtFish National series upon his series return last week but believes more manufacturer interest would elevate the championship to yet another level.

The ARA is riding on the crest of a wave at the moment, with star-studded and closely matched competition and increased international interest.

Last weekend’s New England Forest Rally was a microcosm of the point as just 30 seconds split the leading five cars after the first day and Travis Pastrana and Higgins rolled back the years as they ended up fighting for the win. 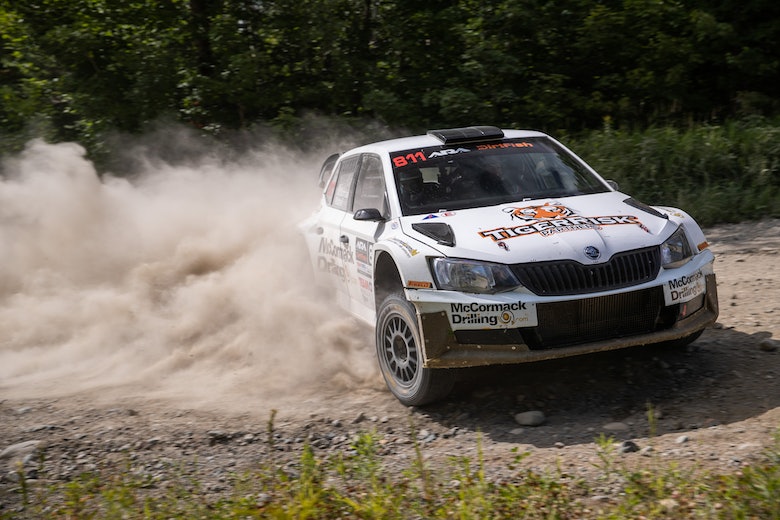 How strong is the ARA just now?

Eventual NEFR victor Higgins hadn’t competed in ARA since 2019 when it was broadly a competition between the Subaru Motorsports USA team-mates at the front. But this year McKenna Motorsport with Barry McKenna is taking the fight to Subaru, while Ken Block is also competing in his own WRX STI.

Higgins therefore told DirtFish “it’s amazing for the championship to be like it is” but is aware more can be done to keep the series progressing; namely in how it is being promoted and shown to the world which Higgins believes can only improve if more automakers join Subaru in the race.

Subaru has done a lot for promoting ARA over the years with its popular Launch Control video series charting the team’s progress throughout the season.

“It would be great to have a couple more manufacturers,” Higgins said. “McKenna’s doing an awesome job with his team but if he can get some manufacturer support and put some more funding into the media side like Subaru are, that’s the only thing the championship really is lacking now.

“I’m not going to say the word TV because it doesn’t have to be TV but having a program. DirtFish are doing an amazing job with their coverage as well, but you still need to match some of the other sports that are out there, you need to have the full program going out there and the only way you’re really going to get that is by having multiple manufacturers paying [for] it.

“And let’s see, I’ve been involved with the championship a long time on and off and there’s always been some quite good peaks and then it’s sort of dropped off. Now the ARA are doing a really good job with the series.”

More manufacturers have been represented in ARA in recent years with McKenna bringing a Škoda to the States and Enda McCormack a Hyundai i20 R5, but Subaru remains the only brand that is officially represented.

McKenna’s current car, his modified modern-spec Ford Fiesta WRC, was built by M-Sport but is run privately through his own McKenna Motorsport and Dom Buckley RSC outfit.

The WRC co-driver with the “golden ticket opportunity”