New England Forest Rally clerk of course Mark Everett has responded to the questions and concerns over dust that arose out of the final stage of the rally on Saturday.

Being second on road, Hoonigan’s Ken Block claimed the dust robbed him of a win, and when an extra minute for dust to clear was requested, the request was denied.

The powerstage this happened on, North Road, has historically been one of the worst stages in regards to dust according to Travis Pastrana, causing some to wonder why it was chosen in the first place.

Everett has provided DirtFish with a statement about why the decisions were made, and what the situation looked like from his team’s perspective. 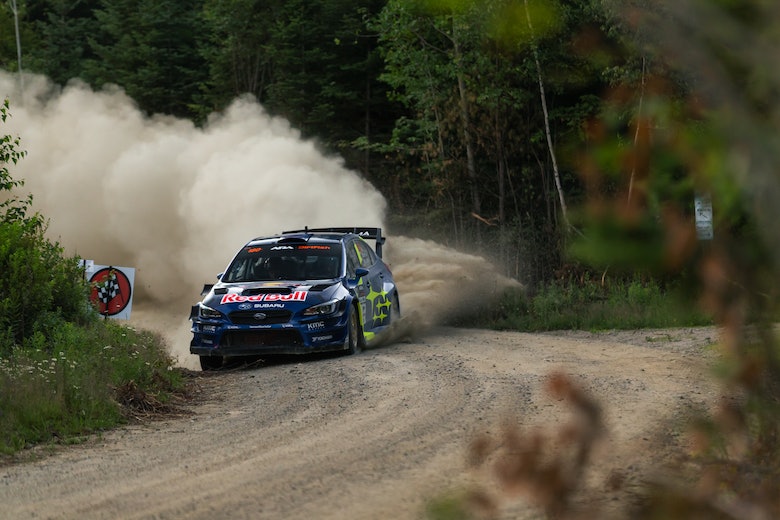 “We stand behind the decision we made with dust minutes given the information we had at the time,” he says.

“No decisions were made with trying to give anyone a personal advantage or disadvantage. Road position ended up being a very important variable on the last stage of the rally.

“The following elements contribute to the many decisions and reasons made before and during the event and contributed to the final result. Road position was likely, the most significant factor and ultimately decided the final outcome.

“I as clerk of the course held the virtual seeded draw on Thursday evening by a Zoom call to all three competitors and myself. Two stewards and the ARA competition director were in the room with me, and Greg Healey was by my side during the draw.

“For the record, the competitor with the fastest speed factor picks first and second fastest follows. Alex Gelsomino picking for the Block/Gelsomino team picked the “C” slip which, as it turned out, gave him first choice of road position.

“The following road positions presented these teams with what we believe ultimately decided their fate. As our event is well known to be dusty at times, it became more evident that road position was critical.

“With the delay on stage 11 due to an SOS situation, the event became delayed and with great efforts by the NEFR control teams and course cars the event started North Road approximately 40 minutes later than scheduled.

“It was evident at the finish control that the sun also played a part along with the dust in making visibility less than ideal.

“As the clerk of the course, who has always been at the end of this stage over the years in order to ensure the safe running of this final stage along with safe management of the many, many spectators that year after year make this the fan favorite, I have never seen a dust problem like we experienced this past weekend on the North Road stage.

“In hindsight, perhaps a contributing factor to the dust conditions was the use of this stage in reverse early in the morning, however, we received positive feedback from a competitor of the “brilliance” of the stage.

“The deputy clerk of the course based his decision on the facts available at the time. Only upon Brandon’s run through this final stage as the first car, did I see the dust issue from the FTC being as bad as it was.”

Everett also claims the request for extra time between cars from Hoonigan was not sent through a proper channel, and was instead sent as a text to the ARA competition director, not Everett himself.

“During Saturday’s competition there were no formal inquiries of any competitor asking for additional “dust minute” time due to stage road conditions other than a text from the Hoonigan team to the ARA competition director during the last service on Saturday, immediately preceding the running of the North Road stage.

“That text went to Preston Osborn, ARA competition director and was relayed to Chris Regan whom I had deputized to deal with inquiries when I was on stages or transits. It was he that made that decision. 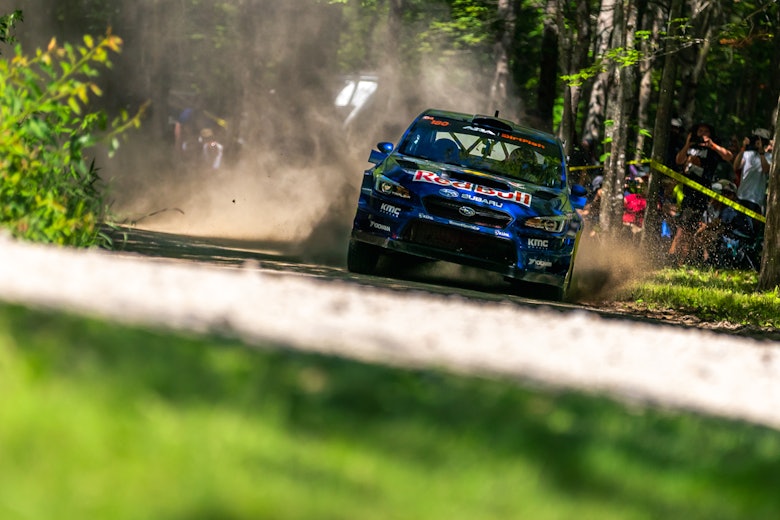 SEMENUK UNSURE HE CAN REPEAT NEFR HEROICS AGAINST BLOCK

“With the information either of us would have had it was the decision that was made. It should have come as an Inquiry though, as that was and is the formal method now for all event inquiries of this sort. There is excellent cell service overall in Errol now so no reason not to use it.

“Competitors are free to ask for special exceptions which may or may not improve their competitive advantage, but this process was not followed by the Hoonigan team!”

As far as any confusion about the decision for North Road to be the powerstage, it’s a simple answer for Everett to give.

“Well, it is the last stage of the event,” Everett says, “and not an uncommon choice if you consider that the WRC implemented the ‘powertage’ concept and is often used as the last stage.

“It provides an incentive for competitors to continue competing until the end of the event which is fantastic for our spectators and competitors alike. North Road is an extremely popular stage!

“It could be said that the Hoonigan team’s intercom problem more than contributed to the final result and kept them from being first on the road on Saturday. Rallies are rarely won or lost based solely on a single stage, I suppose this will be debated for some time to come.

“As a final remark, both the ARA event steward and I were in the final control area and upon working to congratulate both Ken and Alex for their fine effort, we experienced a display of awful language from Alex which at a minimum was extremely un-sportsman like behavior.

“Both the event steward and I understand the disappointment, however “You f****d us” was the phrase angrily said to both the steward and separately to me, which is extremely disappointing to experience, and was actually misdirected!

“We look forward to next year’s 32nd running of the New England Forest Rally and as always will consider and include improvements that will be beneficial to competitors, workers and fans alike.”