Olympus Rally is known for having some of the most treacherous stages in North America, and the 2021 event will be no different.

With each stage being run twice, drivers will be able to try to get more comfortable as they keep running loops. But with that being said, incoming rain this weekend, potholes, and large, sharp rocks are present, ready to cause problems for any team traversing these six stages.

Here’s our guide to what’s in store on round three of the 2021 American Rally Association presented by DirtFish National season.

The first thing you’ll notice about Deckerville is how narrow the road is at the start. The first stage at Olympus this year will test drivers ability to push the limits off the bat, as depending on the turn, cars could end up in a tree, down a cliff, or both. The road opens up a little to encourage more speed, but the stage slows back down again toward the end with some tricky downhill twists.

Plug Mill Reverse starts off with a steep climb up roughly 200 feet through some tight, technical turns. The stage continues with some elevation changes but wide open through some long straights allowing drivers to hit high speeds. This flows into some more steep hills sure to give two-wheel-drive competitors some issues as they struggle for grip. Before the end of the stage the road gets twisted up one for the last time while dropping downhill, before drivers will meet the first of many small bridges for the event, and finish off with a long relatively straight section to a flying finish.

One word could sum up Stillwater Reverse: fast. There’s not too much technical about this stage, but the high speeds with very rare but occasional tighter turns could easily lead to some mistakes. Cars with a high top speed are sure to make some time up here if they haven’t fared well after the first two stages.

At 18.6 miles, incredibly Wildcat is only the second longest stage of the weekend. Being run twice to end the first day of racing, drivers who aren’t already mentally exhausted will surely be worn after battling the Wildcat.

The relentless roads almost never open up for any chance at real straight line speed, and endless hairpins up and down hills often give a sense of déjà vu as multiple sections of the stage almost seem to repeat. Cautions are sure to fill pace notes, and are even marked heavily by signage along the stage in many areas.

Grip will be important not only to carry speed up the over 1600ft of climbing, but also to slow down to keep from flying off the road in the 1400ft of descending through the mountains. Wildcat has by far the greatest difference in elevation with over 760ft separating the highest and lowest point. All this plus racing into the night will make Wildcat by far the most difficult of the stages.

Starting off Sunday’s racing will be the near 20 miles-long Nahwatzel stage. A long-time favorite at Olympus, Nahwatzel is relatively flat compared to a traditional Olympus stage. It’s quite fast, cutting through areas where you’ll commonly have freshly planted trees on one side of you, with seemingly decade old trees on the other. Many of the sharp turns moving from larger to smaller roads and vice versa have deep drainage ditches running in between them which could easily do some damage if not handled properly. With a weekend of rain there’s sure to be plenty of water in its infamous water-crossing for racers to hydroplane over.

The final stage of the rally measures in at just over 10 miles long. The road is pretty fast and flowing but still keeps top speeds down for the most part never letting top speed play too big of a factor. The stage has relatively little elevation change for the most part but sharply drops about 370ft in a little over a mile before climbing back up most of that distance approaching the flying finish. 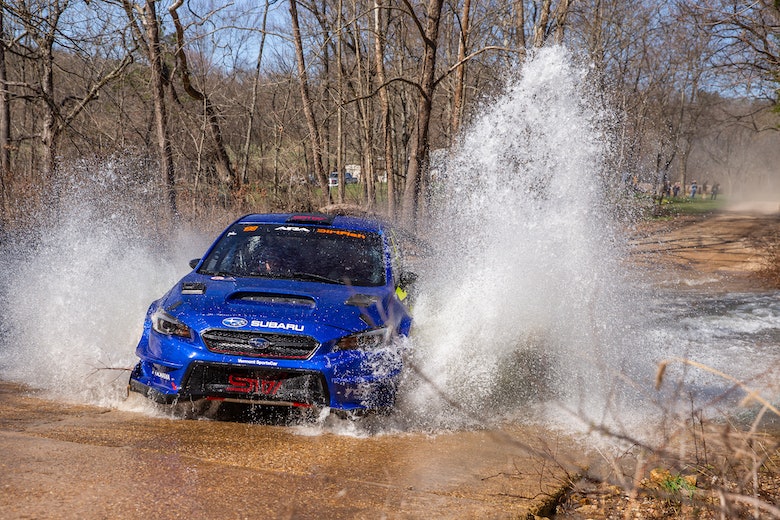 What you need to know about Olympus Rally