Two champions stand atop the podium, used racing shoes in hand, as they rightfully celebrated a victory at the Ojibwe Forests Rally.

While many argue the correct vessel for their drink of choice, for Travis Pastrana and Rhiannon Gelsomino, it had to be their own left shoes. The shoey, Pastrana’s traditional drinking of a beer from his shoe after a win, had been earned.

Let’s go back to the beginning of the year real quick. February 20 marked the first US rally event in recent memory where Subaru Motorsport USA didn’t have a reigning champion in their team.

Travis Pastrana was probably the happiest driver to be there. The US rally staple was finally back in Atlanta, Michigan, where his rally career started. Pastrana has said time and time again the season-opening Sno*Drift is his favorite rally, and a win against Canadian team-mate Brandon Semenuk showed he was serious about this season.

First shoey of the season done, a month later at the 100 Acre Wood Rally would be when the true scope of the 2021 championship was recognized. Ken Block was back, and behind the wheel of McKenna’s Škoda Fabia R5+.

The real threat, however, was Barry McKenna’s new toy. If you didn’t already believe McKenna was going all out for the title, the M-Sport WRC car would have confirmed it.

“When McKenna came with a full WRC car it definitely made all the engineers [get to work,]” Pastrana told DirtFish after winning last weekend’s Ojibwe Forests Rally.

“You see all the different aero we got and put on the car and McKenna’s a phenomenal driver. It definitely felt like he upped the game from where everyone had to be.”

‘Come hell or high water’ might have been too literal of an approach to the 100AW Rally Stages back in March. Massive water crossings were higher than normal, and the roads had been harshly pitted, and rutted, making 100AW a total car killer.

While Pastrana had a slow start, multiple punctures from competitors and an absolute tear in the middle stages allowed him to come out on top – again.

It was yet another shoey earned, but it wasn’t all good vibes. While McKenna had lost 2m30s to a puncture, he clawed back 90s from Pastrana after that, hinting that he had an upper hand in terms of pace on future rounds.

Olympus was “Semenuk’s to lose” according to Pastrana. Semenuk had shown promising pace at the rally when a slick turn onto a bridge caused a rally ending off in the same place the double-zero car managed to crash while running the stage.

The crash left Pastrana in a comfortable lead over Block at his first event of the season in a Subaru, and with McKenna having personal business to attend to, Pastrana would take the win.

Three for three, Pastrana earned his next shoey.

Round four, Southern Ohio Forest Rally, would be a chance for Pastrana to redeem himself after last year’s unfortunate event-ending fire, but unfortunately problems finally started to catch the so-far undefeated driver.

A few bad offs and some admittedly embarrassing stalls on stage starts put Pastrana well off pace early on, but a suspension failure on Block’s car and a failed electrical connection on Semenuk’s would allow Pastrana to still make podium in second place behind McKenna.

No shoeys at Southern Ohio, but still a good step for the championship.

New England Forest Rally would be round five. You probably remember the story of this rally as it wasn’t too long ago. McKenna, Block, Semenuk, Pastrana, as well as a familiar face: David Higgins.

While Pastrana’s job at Subaru is to carry the torch and continue winning the championship in Higgins’ absence from the team, Higgins’ job with McKenna Motorsport was to prevent Pastrana from gaining points to assist McKenna in his championship run.

Despite the absolute best competition we’ve seen in US rallying in the past 15 years, and Pastrana starting off with a 15 s disadvantage after SS1, stage by stage Higgins would gain time back from his competitors, endlessly trading times.

McKenna and Block exiting the rally with mechanical problems left Pastrana nine seconds in the lead with four miles to go when a slight miscalculation sent him and Gelsomino upside-down. 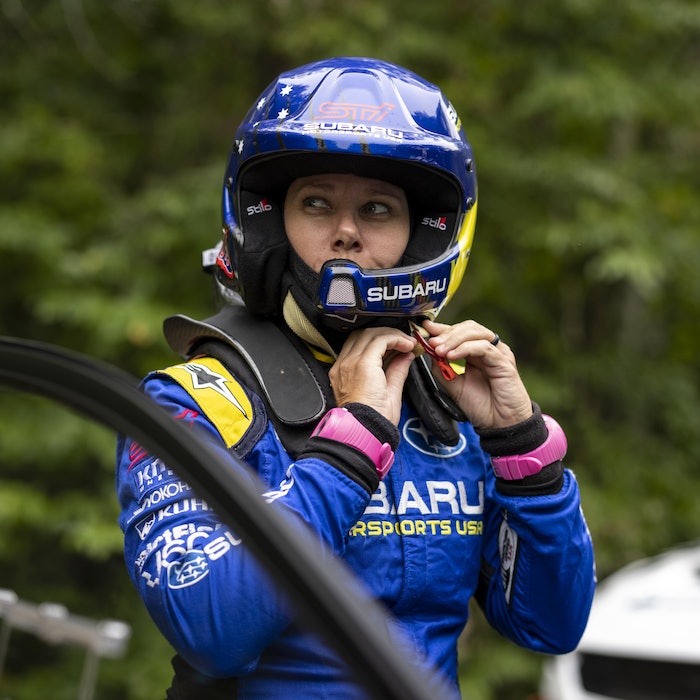 “We knew that a win would get this championship. It was a matter of making sure we beat Ken to confirm the points Rhianon Gelsomino

“That was definitely our low point,” Gelsomino told DirtFish, looking back.

Heading into the Ojibwe weekend, it still looked like Pastrana would need more than just a win to mathematically secure the championship, but this time his luck would be on his side before the event even began.

McKenna had to attend to work concerns and Semenuk damaged the rollcage too much for it to be safely repaired in time took both of Pastrana’s closest title contenders out of the event before a wheel was turned.

“We knew that a win would get this championship.” Gelsomino explained. “Unfortunately Barry wasn’t here, and Brandon had an accident. It was a matter of making sure we beat Ken to confirm the points.”

While we could drag out the final event here and wax poetic, let’s just present it as it happened: Pastrana absolutely ran away with it. By the end of day one he already had a lead of over one minute over the Head Hoonigan in Charge.

So that brings us back to the podium. Pastrana and, for the first time, Gelsomino each taking a well-earned shoey.

A celebration that is much more bitter than sweet to most, but Pastrana doesn’t need to celebrate with something sweet. The thrill has always seemed to be enough for him.

WRC will be more exciting without Ogier – Wilson