Travis Pastrana is now a six-time American rallying champion, claiming his latest title on the Ojibwe Forests Rally – two rounds from the end of the 2021 American Rally Association presented by DirtFish National season.

It’s fair to say Pastrana and co-driver Rhianon Gelsomino have been the class of the field in 2021, winning four of the six events that have been held so far in their Subaru Motorsports USA WRX STI. The only hiccup was a slightly careless retirement four miles from home on the New England Forest Rally that potentially cost him yet another win.

But now that the dust is just beginning to settle on Pastrana’s latest triumph, we thought we’d look back over the years and consider which of Pastrana’s six US rallying titles have been the most impressive?

This ranking is of course subjective, so feel free to jump into the comments box below and let us know if you agree – or disagree – with DirtFish’s ordering.

The 2008 campaign was by no means a bad one for Pastrana; how could it be given he won the title, his third in America? But compared to his five other title triumphs, it was – on balance – his weakest campaign.

Ken Block was the quicker of the two works Subaru drivers across the majority of the season, winning both the 100 Acre Wood and Olympus rallies with Pastrana tucked in behind in second.

But a barren run of five retirements for Block ruined his title aspirations and allowed Pastrana to string together three wins on the Oregon Trail Rally, the Ojibwe Forests Rally and Rally Colorado.

Pastrana and Block were the only two frontrunners to contest all rounds which put them at an advantage, and Pastrana eventually won the title by 44 points.

The only person stopping Pastrana was himself in 2009. He was in irresistible form in what turned out to be his final full commitment to a US rallying season for a while, winning six of the nine events and placing second on another.

Pastrana’s bid was strengthened by team-mate Block, in his final year with Subaru, having a hugely frustrating campaign that featured more retirements than finishes. But that doesn’t detract from Pastrana’s level of assuredness with his surroundings throughout the season.

His final total of 151 points was the highest he has ever achieved, and left him 54 clear of second-placed Andrzej Mancin.

In 2007 it wasn’t team-mate Block that ran Pastrana hardest for the silverware, but instead Australian driver Andrew Pinker.

Pastrana won Sno*Drift and was second to Block on the 100 Acre Wood Rally, but retirements on Oregon Trail and Olympus gave Pinker a crucial opening.

Pinker won the Oregon Trail event and was second in Washington state, then won the STPR with Pastrana third.

However, recovering from his mild blip in form, Pastrana was boss across the back end of the season and won three of the final four rallies to establish a title-winning margin of 12 points ahead of Pinker, who claimed only two podiums on those last four rallies.

It took Pastrana just two full seasons of rallying to clinch what was then the Rally America title, and he would go on to stamp his authority by winning every championship for the next three years too.

The 2006 season was the beginning of the Pastrana-Block era and rivalry in the US, and indeed it was the two superstars who duked it out for the championship trophy.

Across the nine-round season Block was arguably the quicker driver in his Subaru, but Pastrana was the more consistent with just one retirement to Block’s three.

Victories on three of the last four rounds of the season ultimately allowed Pastrana to steal a march and go on to claim his first title on four wheels.

Despite the dominance of 2009 and close battles in 2007 in particular, this one is regarded the most special of Pastrana’s Rally America titles because of his reputation as a relative newcomer compared to entering the season as a proven champion.

On another day, or in another person’s opinion, 2017 could well top this list but Pastrana’s superb campaign comes an extremely close second here to what he produced this year.

David Higgins is the king of US rallying. Heading into 2017, he’d won the last six titles on the bounce and few would’ve bet against him making that seven in a row and nine in total for his career.

Pastrana was mentored by Higgins, but in 2017 he was team-mates with him for the full season at Subaru and set about taking him on. The pair were the clear class of the field, finishing first and second on all six rallies.

Higgins won three of the first four but Pastrana got off the mark with victory on round two, the Oregon Trail Rally, and then hit back with wins on both the New England Forest Rally and Ojibwe Forests Rally that concluded the season. The pressure was on in Ojibwe, as Pastrana had to win to stand any chance of the title and even then it wouldn’t be guaranteed.

In the event of a tie, all the stage positions across the season would be calculated to decide the champion. Pastrana won Ojibwe and scooped the championship with it, resisting all the pressure and getting one over on the driver who’d taught him how to do it.

Splitting the 2021 title and Pastrana’s 2017 success was hard, because ultimately both were brilliant for differing reasons. But 2021 gets the nod because of the deeper strength of the competition and how hard Pastrana worked to achieve it.

Pastrana’s 2020 campaign was stunted before it began as he missed the opener and then his car burned to the ground on round two, but in truth he seemed to lack the necessary composure to go all the way.

That changed drastically in 2021 as Pastrana won Sno*Drift, 100 Acre Wood and Olympus at the start of the season to streak clear in the title race. Tellingly, Pastrana was only the out-and-out fastest on one of those events but he still managed to be the one to keep his head and claim the points.

It’s clear co-driver Rhianon Gelsomino was having a very positive influence as Pastrana’s pre-event preparations mirrored what crews in the World Rally Championship would be doing; an area of “homework” that he had never focused too hard on before.

And despite a blunder in New England that could’ve derailed his season, Pastrana blasted to a dominant win on the Ojibwe Forests Rally to claim the prize two rallies early – albeit the early nature of sealing the deal was aided by the fact Brandon Semenuk and Barry McKenna weren’t able to take the start. 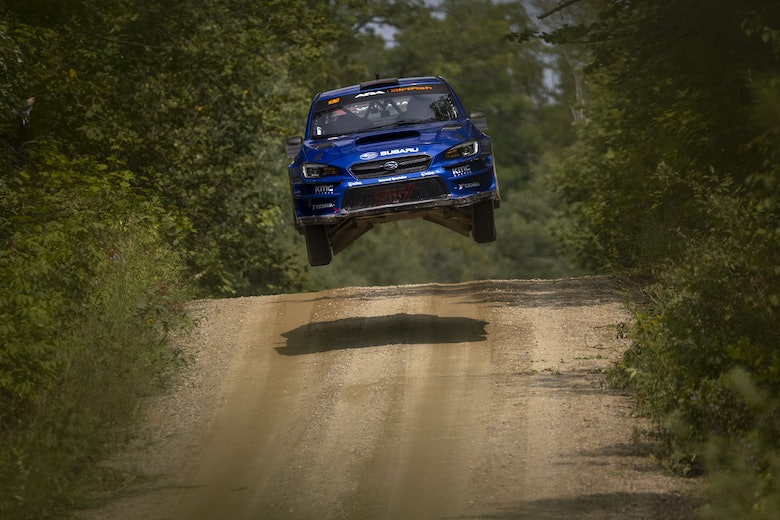 The steps Pastrana had to make to reclaim ARA title 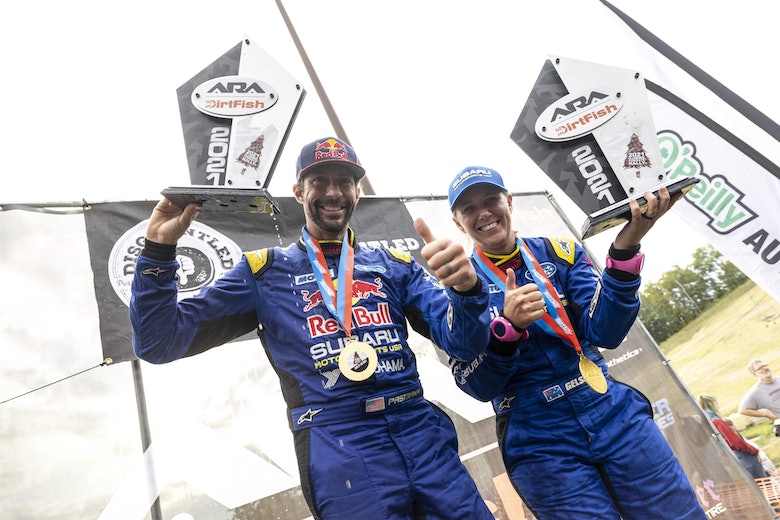