Andrea Crugnola has built a 9.5-second lead on Rally di Roma Capitale, the sixth round of the European Rally Championship season, as Italian championship drivers outclassed the ERC regulars.

Two-time European champion and four-time Italian champion Giandomenico Basso is statistically the most successful driver on this rally with two wins and six podiums in seven starts, and put up three fastest times on the opening leg.

That included a win on the rally-opening superspecial at Rome’s iconic Colosseum. But trouble was already brewing for Basso by that point, as he was handed a 10s jump-start penalty.

Basso then compounded his woe by doing the same thing again on the very first stage of Saturday morning, this time getting a minute added to his rally time for a second offence. If he jump-starts for a third time, he’ll get a three-minute penalty.

His gap to the front is 1m12.7s – effectively meaning he’d have been a mere 2.7s off the top spot without his jump start problems.

But he suggested that an appeal against his penalties could be a possibility at the end of the day’s final stage.

“We have to check because I am not sure about the penalties,” he commented.

Basso being out of the picture in the lead fight led to a two-way scrap between Crugnola and Daminano De Tomasso, the latter of which immediately inherited the lead with Basso’s demise.

A stage win on Santopadre’s morning pass helped De Tomasso build his lead to 4.8s, with Crugnola admitting he’d been too cautious in preserving his tires.

But after some setup tweaks at midday service, Crugnola hit back hard in the afternoon.

He wiped out De Tomasso’s advantage in a single run, going 9.8s faster than his rival on the second pass of Santopadre. With that Crugnola took the lead and with it a stage win.

It was more of the same on Guarcino, the final test of the day, where Crugnola built his lead up to 9.5s with another fastest time.

“The fight is very tight,” said Crugnola. “Tomorrow we start almost on zero because I am very close with my competitors. The day has been good for me, no mistakes.”

Simone Campedelli completes the podium places as the first of the ERC regulars, though his seven years’ worth of experience on Rally di Roma is clearly helping.

After a season filled with incidents that has led to only a single top-five finish all year, Campedelli was finally on the money in Rome and, had it not been for a spin on the first stage of the morning, could have been even closer to the front.

Team MRF’s best-placed driver is 26.4s off the lead but Campedelli will be looking behind him, with Yoann Bonato and team-mate Efrén Llarena close behind in fourth and fifth, 8.7s and 9.4s in arrears respectively.

Llarena can wrap up the ERC drivers’ title this weekend if results were to go his way. But a combination of being down in fifth while Simone Tempestini is right behind him in sixth means that, as it stands, the title race would solider on to Barum Rally Zlín, so long as a replacement for the long-absent Rally Hungary is found. 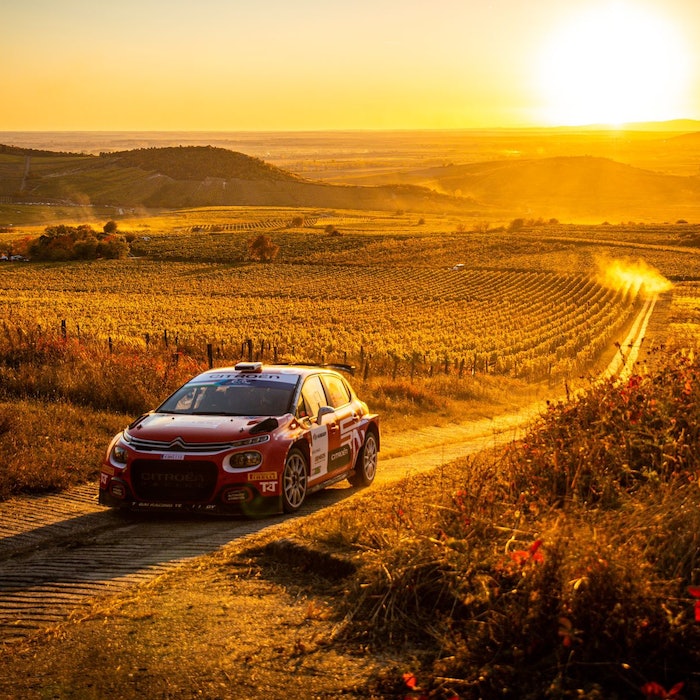 A letter of intent has been signed for its return – but can it fix its issues to get FIA approval?

Tempestini is locked in a close battle with Fabio Andolfi, separated by only 1.6s heading into the rally’s final day.

Giacomo Scattolon had been fighting Andolfi for seventh place early on but on Guarcino his rally fell apart, shearing the front right wheel off his Škoda Fabia Rally2 evo.

Despite losing the wheel entirely and breaking the suspension, he reversed out after several minutes stuck at the side of the road and limped to the finish line – but his car was in no state to fit a spare wheel, so he retired on the road section before service.

Rally Liepāja winner Mārtiņš Sesks had held seventh place after Saturday’s first stage but he dropped well down the order on the morning pass of Santropadre, missing a braking point and oversteering off the road and down a bank.

He felled a telegraph pole and demolished a fence when sliding backwards off the stage but shortly after a red flag was deployed for Emmanuel Guigou’s crashed Alpine A110, he was able to get underway again.

Guigou had been on a big push on Saturday morning, having gone third fastest overall on the short Roccasecca test in immediately before his off, despite driving a rear-wheel-drive RGT-spec Alpine against a field of Rally2 cars.

Andrea Battistolli holds eighth after nearest rival Ken Torn understeered wide on the last stage of the day and clattered a rockface, breaking both the front right and rear right wheels on his Ford Fiesta Rally2.