Miko Marczyk wrapped up a first European Rally Championship victory on his home soil, surviving a scare on Sunday afternoon that nearly caused his engine to terminally overheat.

The first full day of ERC action in Poland had been a two-way battle between Marczyk and Nil Solans, until the latter suffered a broken damper that in turn impacted and broke the steering arm on his Hyundai i20 N Rally2.

With no ability to steer, Solans went down a ditch and could not continue, meaning Marczyk was left with a decently-sized gap to Solans’ Kowax 2B Racing team-mate Tom Kristensson behind. 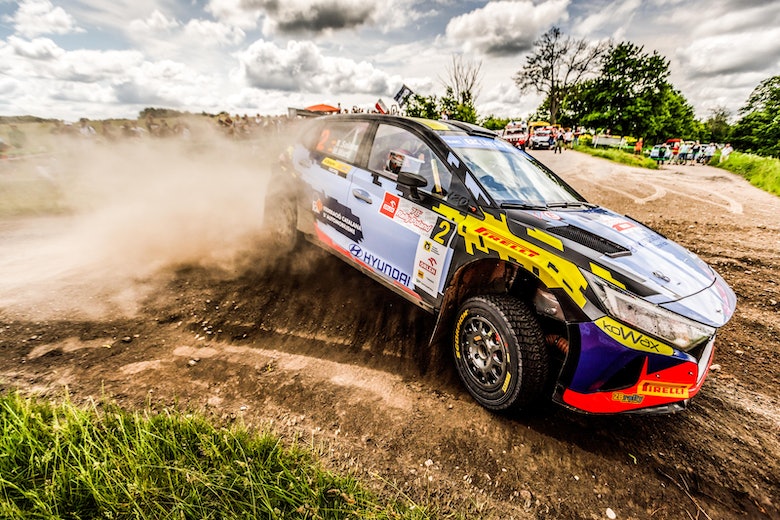 Solans crashes out of Poland lead

But a lead battle suddenly looked to be on the cards with three stages to go, as in the final meters of the Mikołajki Max test the front of Marczyk’s Škoda Fabia Rally2 evo dug into the mud between ruts in the road.

While scraping the mud out of the front of his Fabia fixed the issue he was concerned of a repeat thereafter and slowed down, allowing Kristensson to close the gap to just over 10s before the powerstage.

There would be no late drama however as Marczyk brought his Fabia home a second off the pace, securing his first ERC win.

“That was a thriller and not an easy day,” said a relieved Marczyk.

“It was long journey after Swietajno. I was without any force on the car on the braking in the ruts because I was trying not to do anything [to damage the car].”

Kristensson ultimately had too much time to make up but had Marczyk looking over his shoulder, as the rally winner admitted he’d pushed hard until his radiator drama on Mikołajki Max to try and rebuild the gap over the 2020 Junior WRC champion.

Kristensson pulled away from the field behind him throughout the course of the day to wrap up a maiden ERC podium finish, while also taking the lead in the Polish championship standings.

A mere 0.3s separated the pair heading into Sunday’s action and while Llarena initially took third place, his Škoda Fabia Rally2 evo suffered two broken spark plugs that left him down on power for the rest of the morning loop.

That problem cost Llarena 7.8s and allowed Torn to build a gap in third place, which then got even bigger on the second pass on Swietajno.

Llarena, with a championship lead to protect and his main title rival scoring nothing at all, was rightfully cautious about encountering the same issue that had befallen Marczyk running behind him on the road.

“I try to be fast but also to be clever in the big ruts because we can destroy the radiator,” Llarena explained.

In the end he picked safety over speed on the powerstage, going only eighth fastest and failing to pick up any bonus points for his championship account.

Simone Tempestini, on the other hand, pushed hard on the final stage, clipping some temporary fencing on the edge of the road as he hung his Fabia out on the limit.

He was on the comeback trail after a puncture on the previous stage, which as it transpired likely cost him fourth, as second-fastest time on the powerstage drew him to only 1.3s behind the championship leader at the finish line.

No-one could match Vaidotas Žala on the points-paying powerstage though, as he creamed the field by three seconds to take maximum bonus points and also his first ever stage win in the ERC.

Sixth place was a hotly contested battle, with only 15s separating fifth through ninth heading to the powerstage.

It was doubly important for Adrian Chwietczuk and Grzegorz Grzyb, who were battling for the final podium position in the Polish championship classification and separated by only 2.3s.

But their battle was neutralized when Chwietczuk pushed his left-rear tire off the rim less than a mile onto the powerstage, dropping over a minute and falling from sixth to 12th.

Grzyb kept 2019 ERC1 Junior champion Filip Mareš at bay by 2.3s for sixth in the end, who in turn was only 2.9s up on ERC regular Alberto Battistolli.

Javier Pardo, who for Poland had switched across to Team MRF but retained the same car and technical package, could only muster ninth place, partially held back by penalties for both a jump start on stage two and turning up late for stage seven.

His MRF team-mate Norbert Herczig failed to appeal a one-minute penalty he’d been handed for checking in early for midday service on Saturday, rounding out the top 10. 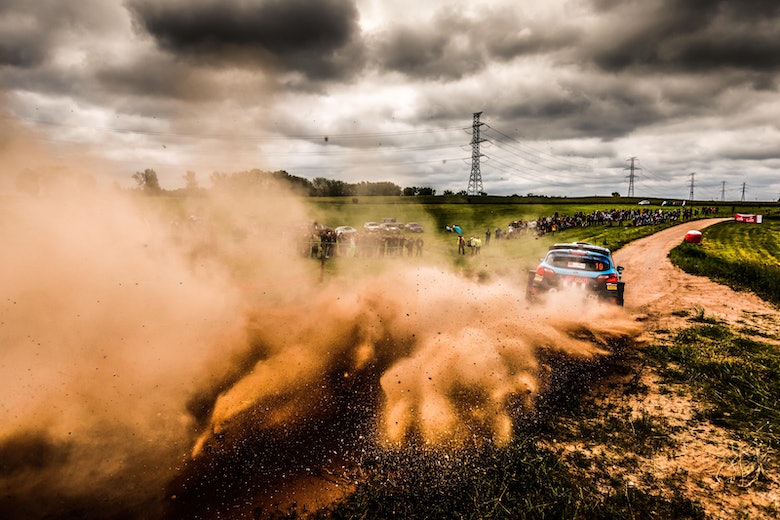