M-Sport’s Adrien Fourmaux headed to the European Rally Championship’s opening round as a wildcard and one that was fancied as a contender for victory. Fourmaux himself was talking the talk before Rally di Roma, telling DirtFish “the goal will be to fight for a podium or maybe more.”

Fourmaux has regrouped, put the misjudgement behind him and stuck in some blinding performances of late that all but ensure that, this time, he really will be a contender for victory as he returns to the ERC for Rally Islas Canarias.

Jari Huttunen’s mesmerizing 2020 form has been highlighted by DirtFish recently, but Fourmaux’s run of results since Rally di Roma have, quietly, been just as strong. At the beginning of 2020, the 25-year-old Frenchman had never won a rally before but now he’s won three and arguably that should be four had a bizarre timecard incident been resolved in his favor on Rali Terras d’Adoboreira in October.

Aside from that mishap, Fourmaux was third on the M-Sport Return to Rally Stages (before the M-Sport cars withdrew from the results), second by just 2.1 seconds on Rallye Terre de Lozère in France, second in both Estonia and Turkey in WRC2 – and showed pace capable of winning both – before winning Trofeo ACI Como earlier this month. 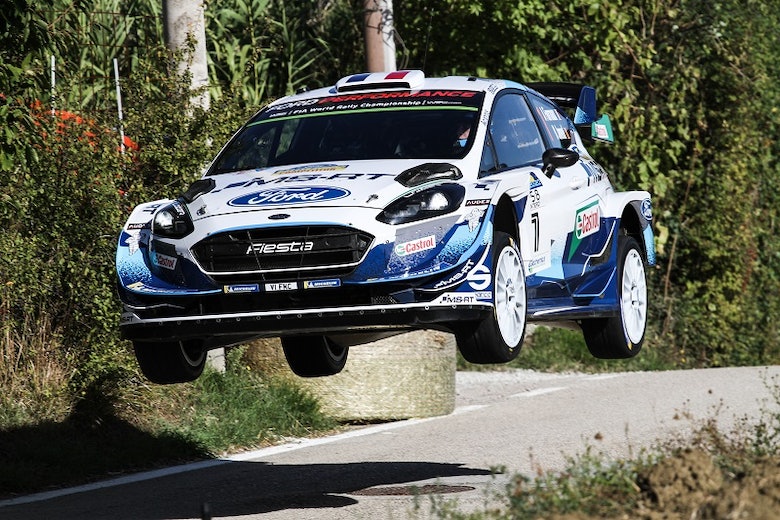 Those were all achieved in the Fiesta Rally2, but Fourmaux also got his first taste of Rally1 machinery at the Rallylegend event in San Marino. Naturally, he won the rally, but the result wasn’t what mattered. It gave Fourmaux a sense of what he could be doing in the future, and he really enjoyed it.

“My first time in the WRC car was…incredible,” he tells DirtFish. “It was like a dream, so fun. Especially in San Marino where there was really no pressure because the big guys like Ogier weren’t there, it was just some fun.

“When I was on some roads where I knew there were no spectators, I just tried to drive cleanly and smoothly, just to be fast. And when there were spectators, I just decided to make a show and make a nice video for them. It was honestly, a very, very nice rally for us. One of the best. Everyone was so happy to see us there.”

While results like that can’t exactly hamper Fourmaux’s confidence as he wades back into battle in the ERC, it’s his drives in the Fiesta Rally2 that have been steadily raising his stock level. And M-Sport team principal Rich Millener knows it.

“We’ve done these small rallies now in Italy and Portugal which was the intention to show the car in the national championships which worked very well, we’re very happy with that performance but it would also be good for Adrien to benchmark himself against the top European talent,” he tells DirtFish.

“It will be a difficult rally because he’s not been there before and it’s a big fight at the moment in that championship.”

DirtFish puts it to Millener that Fourmaux seems to have undergone something of a transformation, that he’s found a new upturn in his peak performance level. But Millener argues this has always been within Fourmaux, it’s just that nobody was noticing before.

“Within WRC it’s very difficult, you get a puncture or you have a small issue or anything and effectively you can kiss goodbye to getting a good result because it’s so competitive,” he says.

“It’s so difficult so I think when you’re only competing mainly in WRC, if you have a few unlucky rallies, you don’t get the results you want and people read into that that you’re not performing well. Actually when you look at the stage times, our view is that he’s doing very well.

“You’ve got to remember his amount of experience as well. I think Sardinia was his fifth gravel rally ever in a four-wheel-drive car so he really doesn’t have any experience so that’s what we’re trying to do at the moment in terms of giving an opportunity to really find some more time in the car but I think these smaller rallies.

“OK they’re a little bit easier to compete in because there’s less number of stages, less mileage etc so that helps as well but we really think he’s a mature guy for his age and experience but there is for sure a lot of things still to learn but as well.

“I think it’s unrealistic to expect him to go and win everything,” Millener adds. “And we’re also telling him we want him to finish rallies, we don’t want him to crash and not only does it damage the car, but it also damages his experience. If you’re going to send him all these places and he’s not able to do the stages, it’s pretty pointless.

“He’s been asked by us to get round and gain this experience and knowledge of varying road conditions, how things work, understanding the tires, understanding the car, just the whole bigger picture of all the events we send him to. So as much as we want him to push on, there’s times where we’ve pulled him back.”

It’s important to remember that 2020 is just Fourmaux’s fourth ever season behind the wheel of any rally car, so to be taking on the likes of Mads Østberg and Pontus Tidemand and keeping up with them is an achievement in itself.

“Ever since I moved up from the French Junior championship, I have learned so much, especially from my mistakes,” Fourmaux tells DirtFish.

“My first rally in an R5 car, which was on the Rallye du Var [in 2018], I was quick, but I made a stupid mistake on the water splash, it was…just a stupid mistake, but I take that mistake and I tried to learn from it.

“The next rally I did in an R5 was in WRC2 [on the Monte Carlo Rally], I finished P2 and 10th overall. I really enjoy learning more about driving and the sport. How to improve and learn from experiences, maybe I’m good at that because it’s like studying.

“It’s not similar to medicine obviously but it is the same mentality you must have reading the notes, analyzing where you can improve, looking at the route and deciding how to make a perfect drive.

“From the first season [in an R5] to the second, I think I learned a lot very quickly, because you need to at this level. I feel really confident with the car and the team, who have been pushing me a lot since two years ago, and it’s important for any driver that they feel supported. I know the R5 really well and feel like I can drive it anywhere.”

It’s just as well that Fourmaux knows his current car very well, as he’ll really need to be on his A-game on Rally Islas Canarias to fight the likes of Alexey Lukyanuk, Oliver Solberg, Craig Breen and an on-form Andreas Mikkelsen.

The hope is that he’ll be fighting far bigger names in the future though at the front of the WRC. Is it fair to look at Fourmaux as a WRC-level talent in waiting?

“I think everyone we kind of spend some resources pushing to do events, we’ve got one eye on the future, but I think R5, I’m not saying it’s easy to drive and be competitive in R5, but understanding and taming an R5 is something that can be done by a lot of people, but moving up to WRC is increasingly difficult because it’s just the level you have to be at,” Millener says.

“Of course, we’re putting Adrien into these positions because we think he’s one of three or four younger drivers we currently have in the cars that could have potential to go forward.

“I think we’ve always said even if you went into a WRC car it’s probably a three-to-four-year process once you step into that car before you’re actually competitive at the top end. You look at somebody like Kalle who’s been doing a huge amount of testing, he’s putting in some incredible times and he probably could have won a rally this year at some point but there are small mistakes which comes with just having more and more and more time and experience in the car and not only the car but understanding the stages that you’re in and not making any mistakes.

“The top guys are on the top level in the world so to get to that point is not easy. So yes of course Adrien is someone we’re interested in and we all have a lot of respect for him as a person and we feel the way he approaches and the way he manages himself and comes across and does everything is very professional and he has some very good traits that will see him go further in the future but at this point in time, it’s very difficult to say who will or won’t make the top level.

“But we try to give all of our younger drivers an equal opportunity going forward.”

It’s now up to Fourmaux to transform that “equal” opportunity to the ‘only’ opportunity. A WRC graduation may be a few years away yet, but it always helps to be at the front of the queue. A stand-out drive in the ERC this weekend and a similar performance at Monza wouldn’t be a bad place to start…