Reigning World Rally Champion Sébastien Ogier has kicked off his title defense in style with a record-breaking eight Monte Carlo Rally victory which was also the 50th win in his illustrious WRC career.

The victory, by 32.6 seconds over Toyota team-mate Elfyn Evans, was complimented by the quickest time on the powerstage too that earned Ogier an additional five championship points, elevating him into a nine-point lead in the standings.

Hyundai’s Thierry Neuville, on his first rally with Martijn Wydaeghe in the co-driver’s seat, rounded out the podium 1m13.5s shy of Ogier in the overall classification.

Toyota has also established an early advantage in the manufacturer’s standings, outscoring Hyundai by 22 points on round one.

As a new season of the WRC dawned, it was 2019 world champion Ott Tänak that made the brightest start by winning both of Thursday’s pair of stages – held in the afternoon rather than the evening as per tradition because of French coronavirus curfew rules outlawing competition after 6pm.

But as Friday dawned, Tänak failed to replicate the same strong pace on a day that was dominated by the Toyota drivers.

It then got worse for the Estonian on Saturday when two punctures on consecutive stages ruined his rally. With just one spare Pirelli in the trunk of his Hyundai, Tänak had to limp back to service in Gap with three tires on his car.

FIA regulations mandate that all competing vehicles must arrive back to service in a roadworthy condition, so although Tänak made it back he had no option but to retire. And with no SuperRally regulations in place for Monte’s final day based in Monaco, he was unable to restart on Sunday and claim any points from the powerstage.

Toyota’s Kalle Rovanperä had shadowed Tänak on Thursday and hit the front after stage three as Tänak slipped backwards, but he was soon overhauled by both of his team-mates as the day progressed, losing 10s before SS4 had even began due to arriving to the time control one minute late.

Ogier had suffered a brake problem on Thursday but bounced back beautifully on Friday, winning four of the day’s five stages to propel himself into contention. However it was Evans that led on Friday evening as Ogier punctured on SS6, losing over half a minute in the process.

It wouldn’t take long for Ogier to prove his point though, storming past Evans – who felt he was driving too carefully on the very first stage of Saturday. Although Evans did nick a stage win at the end of Saturday, the die was cast and Ogier looked to be in control.

The seven-time world champion’s lead swelled across Sunday’s final four stages with Evans realizing he’d need to risk more than he was prepared to if he wanted to overhaul his team-mate and score a maiden Monte Carlo Rally win.

For Ogier, his seventh Monte victory in eight years was special as it cemented his place in the history books on a rally he considers more important than the rest, which is no surprise for a man who hails from the rally’s base in Gap.

As well as now holding the record number of Monte wins, Ogier also became the first man to win the world’s oldest rally in three different decades with his first victory coming in 2009.

“The car has been amazing I really enjoyed the weekend it’s been such a pleasure,” Ogier said.

“I almost have tears in my eyes now, it was a great decision to do another year.”

Evans was relatively content with second spot as it did his 2021 world championship credentials no harm at all.

“It’s been good but I just never felt 100% as it should have been, perhaps a little bit under the point where you would say is a level of risk you’d want to take,” revealed Evans.

“Séb was better this weekend. I would’ve preferred to be a little bit more competitive against him, I can see the time but it just didn’t fit quite in my comfort zone this weekend.”

Neuville’s third spot was well-earned considering the challenges he faced with a new co-driver. With no shakedown for the Monte, Neuville and Wydaeghe’s first competitive outing together in a rally car was SS1.

There were some moments to begin with, including a spin on Friday, as well as some imperfections to iron out – particularly with the intercom – but Neuville can be pleased with a podium finish and two points from the powerstage given the challenges.

“Very relieved to be at the end of this rally to be honest,” Neuville said.

“We knew it was going to be a real challenge, I didn’t know what to expect but Martijn has done a really good job. I think we couldn’t really have done much better.”

Rovanperä scored fourth place after a mature drive. Aside from slipping off the road and into a field on Saturday and then a puncture on Sunday morning’s first drive, he kept his nose clean to the finish.

The 20-year-old did pump in a strong powerstage performance though, setting the second-fastest time despite describing his run as “nothing incredible”.

Fifth-placed Dani Sordo had a trying weekend, struggling for confidence and a good feeling in his Hyundai early on before commenting he had “never heard a noise like that” in reference to what he suspected was a broken differential.

He quickly found himself in no man’s land and when Tänak was ejected from the equation, and he took it steady on his final WRC rally with Carlos del Barrio co-driving to ensure Hyundai scored manufacturer points.

“We didn’t do very well in this rally honestly,” Sordo admitted.

“I’m not really happy with myself but the only thing we could do was get the manufacturer points to try and help the team. Maybe at the end of the year these points will be important and we will come back stronger.”

Takamoto Katsuta netted a career-best sixth overall in a fourth Toyota Yaris WRC, and was pleased with the progress he had made throughout the weekend. Aside from the odd spin, Katsuta had a clean rally, finishing 22.3s ahead of Andreas Mikkelsen in a Rally2 Škoda.

Mikkelsen made a bold pre-season promise as he vowed to dominate every WRC2 round he started in 2021, but he made good on that on the Monte with a near two-minute class win over M-Sport’s Adrien Fourmaux.

However the Norwegian survived a late scare as he got the nose of his Fabia caught in a snowbank briefly on the powerstage. Despite this, Mikkelsen still won the stage and score five bonus points now powerstage scoring has been extended to to WRC2 crews.

“I just had to put it on the snow to brake the car,” Mikkelsen said of his final stage incident.

Fourmaux finished “a very nice rally” in ninth overall in a Ford Fiesta Rally2 but had kept Mikkelsen honest before a puncture on Saturday wrecked those ambitions. He saw off a late challenge from Eric Camilli who netted third in WRC2 and 10th overall.

Gus Greensmith was the sole-surviving M-Sport Ford Fiesta WRC driver, claiming eighth overall on a confidence-sapping weekend. On Friday, Greensmith labelled his performance “the worst of my career” as he struggled to replicate the same feeling he found on the pre-season test.

A couple of spins and stalls aside there were no major moments for Greensmith, but the pace wasn’t where the 24-year-old Briton had hoped it would be.

“I’d say it’s been the worst performance of my career so far,” Greensmith reiterated at the end of the rally.

“I feel with the preparation I had I should’ve delivered a much better performance but it’s happened now. I’m going to learn from it and improve to get to where I can be because this wasn’t good enough.”

His M-Sport team-mate Teemu Suninen failed to complete a single stage. Suninen was setting impressive pace on Thursday’s opener, but on a quick right-hander towards the end of the stage he drifted wide on the wet Tarmac, careered into a soft bank and was pitched into a barrel roll.

The Finn’s Fiesta slipped down the bank on the opposite side of the road, smashing into a tree rear-first and damaging the roll cage beyond repair. That ruled him out of the rest of the weekend.

Yohan Rossel claimed 11th overall and the WRC3 class win despite a final stage puncture, fives positions ahead of 2C Competition Hyundai driver Pierre-Louis Loubet – in the same i20 Coupé WRC that Neuville and Sordo were driving – who was contesting his first ever Monte Carlo Rally.

Loubet had been in 10th ahead of Greensmith before he outbraked himself on Friday’s final stage, hit a rockface and was forced to retire for the day.

He made a similar error on the powerstage, losing two minutes from his recovery. Venting his frustration, he banged his head into his seat as he crossed the finish.

“I did a good stage this morning in this one, I tried to take some [powerstage] points in the stage but I did a stupid mistake,” said Loubet.

“I was blocked in the ditch for 1m30s so I’m very disappointed but thanks to the team who did a very good job to rebuild the car on Friday night.”

Oliver Solberg had deposed Camilli of 10th ahead of the powerstage, after Camilli dropped 40s when he arrived to the time control of the penultimate stage four minutes late. But Solberg, who had set two superb top-five stage times on his first WRC rally in a Hyundai i20 R5, braked late on the final test and went into a ditch. With no spectators allowed to watch the rally, he had limited assistance for an escape and had to retire. 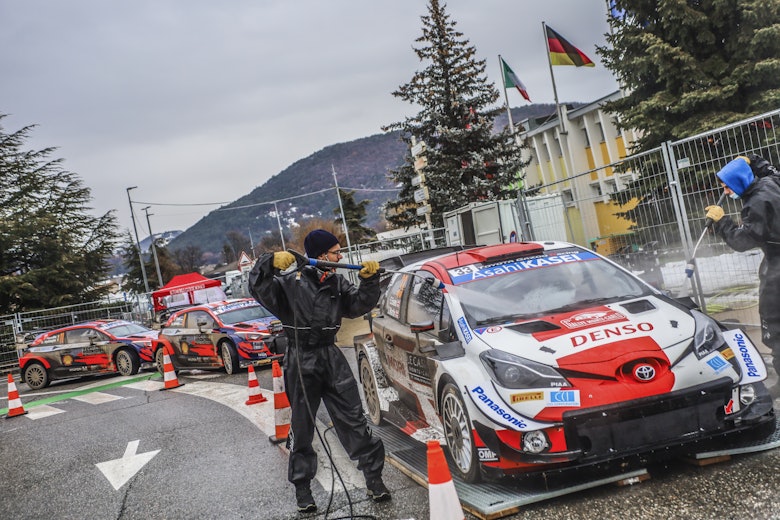 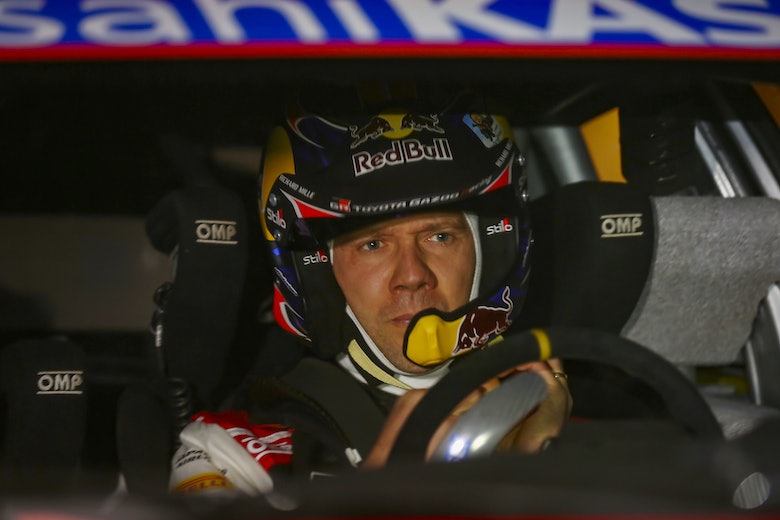 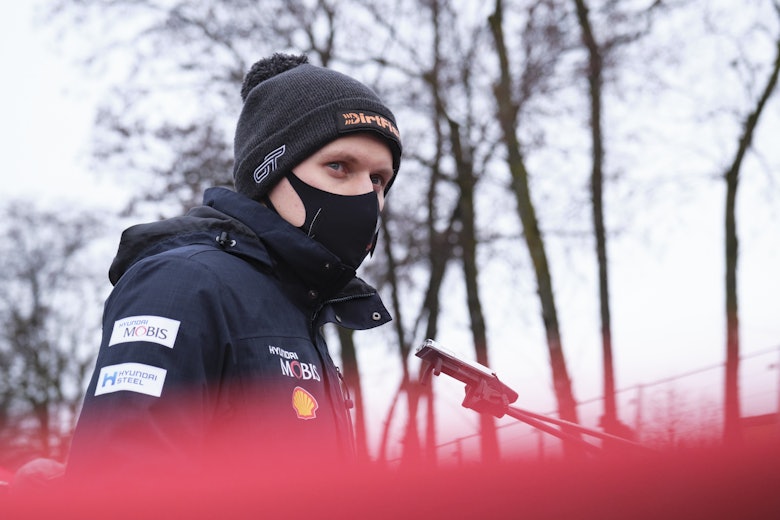