Dawn. The start of the working week. And Colin McRae went to work harder and faster than anybody.

North of Yorkshire and into County Durham, where a real wake-up call lay in wait. At 17 miles, Hamsterley presented a baptism of forest fire for the crews. With the sun still thinking about its next move, the cars dived into the trees for the first time on this 1995 title-deciding battle.

The stage had been lengthened by 300 meters from last year, so when the #4 Impreza 555 stopped the clocks 50 seconds faster than McRae and co-driver Derek Ringer had managed 12 months ago, you kind of knew something special was on the cards. And then some.

The Scot had thundered into the lead on the day’s opener. A full 28s faster than anybody and 29s up on team-mate and title rival Carlos Sainz.

On hearing the time from the sister Subaru, Sainz radioed the team and asked them to clarify. Maybe there had been some interference in the signal. Confirmation. No interference.

Sainz asked them to check one more time.

How had McRae done that? So close is the competition at the pinnacle of world rallying, nobody takes two seconds per mile out of anybody these days. Except Colin. And it wouldn’t be the last time he did it this week.

Opening the door to offer insight into his efforts, McRae told Brian Patterson (BP): “It was very good, but slippery in places. I don’t really like that stage.”

A couple of minutes later, a bewildered-looking Sainz greeted BP and added: “For me, it went well. I just can’t believe Colin’s time…”

McRae’s passage into first place was eased by the demise of overnight leader Tommi Mäkinen. His Mitsubishi Lancer clobbered a log on the inside of a corner, damaging the front-left suspension. He made it through the stage, dropping a minute, but the road section to Hexham, where the Ralliart team lay in wait was another matter. A by-product of the impact was a flailing halfshaft, which was damaging the front differential with each and every turn of the front wheels. The transmission issues were one thing, but it was the local constabulary’s dim view of the absence of an inflated Michelin on that corner that really did for the Finn. Mäkinen was out.

“Tommi broke something in Hamsterley,” Short confirmed. “The transmission casing is broken. Even if he got here, under the new regulations, we couldn’t change the transmission until the end of the leg…”

Tricky as Hamsterley was, it was something of a loosener for the challenge of ‘killer’ Kielder which followed. 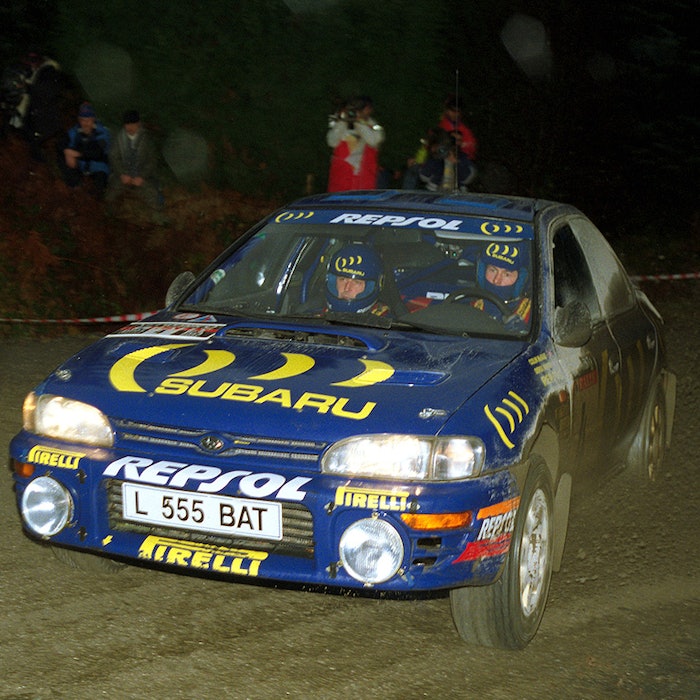 1995 REWIND: HOW THE RAC RALLY ITINERARY WAS BUILT

Talking to DirtFish after the stage, Prodrive technical director David Lapworth said: “The split times were crazy. What the hell was going on? David’s [Richards, team principal] first reaction was: ‘Some idiot’s got that split time wrong. Colin’s not plus-50, he’s minus-10. They must have got the minute wrong.’ It was chaotic.”

Chaotic was about right. Chaotic, but correct. The 36-miler had wreaked havoc.

Turned out, McRae had been parked up for the best part of two minutes changing a puncture.

“I saw the rock,” said McRae after the stage. “I saw it. I ran over it. I didn’t think it would be a problem.”

“We drove for about 10 miles, but the tire went soft. The EMI [Pirelli’s mousse insert within the tyre to keep it inflated in case of a puncture] was OK, but then the tire came off the rim.”

McRae had emerged from the car to inspect the offending tire in the boot of the Impreza.

He grinned: “Aye, Jerry, the mousse was away, bounding away into the trees!”

Aye, Jerry, the mousse was away, bounding away into the trees! Colin McRae

With a wink, he was away.

Back to the front for the first time since his fastest time on day one’s opening test, Sainz’s mood didn’t reflect his 1m14s advantage.

“The temperature is up and down, up and down,” he said. “It’s maybe the [head] gasket, or the head is bent.”

Sainz feared his rally was over.

Whatever next? Kenneth Eriksson arrived, having seen and hit the same middle-of-the-road boulder which did for McRae. Same result. He dropped two minutes. Bruno Thiry’s Ford Escort RS Cosworth arrived at the stop line in a cloud of smoke with the rear brakes on fire. But at least his Ford made it. Malcolm Wilson’s Michelin Pilot car had come to rest in a ditch.

“I’ve got to hold my hands up,” said the Cumbrian later. “It was my mistake. I had: ‘Flat-left continues over crest and right-max over dip’, and basically it was an ‘easy’.

“I’m disappointed. I knew there was no way we were going to beat the Subarus, but I thought I could have finished third.”

Instead, he would focus his attentions on running Alister McRae’s car. The Malcolm Wilson Motorsport Escort – liveried in ‘The McRae Collection’ stickers to reflect the investment Colin had made in his younger brother’s RAC effort – looked decidedly second-hand at the finish of Pundershaw.

“We were only a mile in,” said Alister. “There was a crest over a third-gear right-hander. I kept the power on and it rolled, and landed on its wheels. It shot across the road and we had to reverse – then we spun at the next junction.”

At Falstone service, Subaru inspected Sainz’s engine and rectified the temperature fluctuations by removing the thermostat.

Now all Sainz had to do was defend against the expected McRae onslaught. Colin duly delivered, slashing into the Spaniard’s lead: 11s in Broomylinn. Four more in Wauchope.

But then came Kershope, the place which ended McRae’s RAC hopes two years ago when a branch punched through the front of the Subaru.

History almost repeated itself: clouting a rock on a regraded section of the stage, the front-right suspension was damaged. By the finish, the Subaru’s off-side front wheel was folded back firmly into the arch. McRae went off the road trying to get through a right-left just before the flying finish. But he made it across the line.

Two seconds faster than Sainz, and having driven 10 miles with the front-right pretty much doing its own thing. 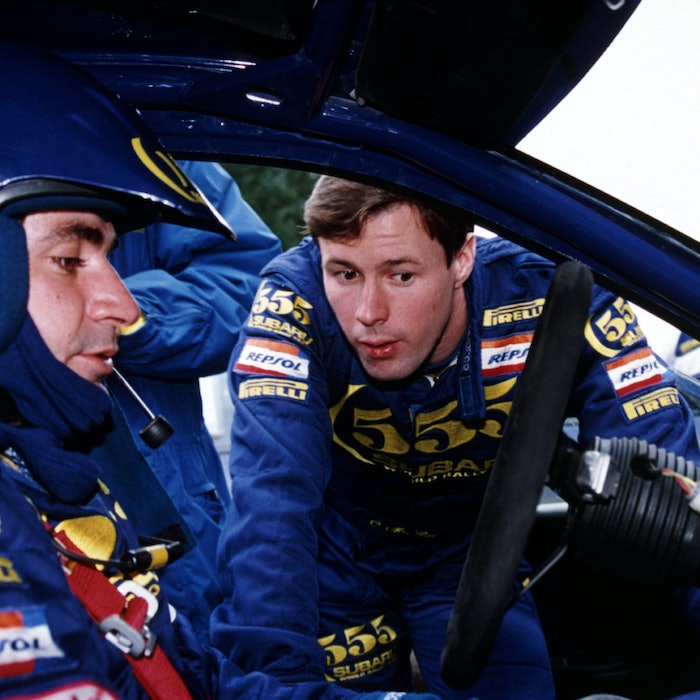 DIRTFISH IS BRINGING LIVE STAGE-BY-STAGE UPDATES THROUGHOUT THE RALLY

After the stage, McRae dispatched Ringer to find something to lever the suspension leg back into the place. A log did the trick. He then tried to detach the driveshaft to save it from damaging the differential, but there wasn’t time. They had to get on the M6 and head south to service in Penrith.

Would he make it? Top Gear presenter Tony Mason posed just that question.

Slightly flustered, overalls muddied from his efforts, McRae paused before sliding back behind the wheel.

As McRae rode through these problems, they served to bolster his confidence. Sainz watched on with something approaching incredulity.

“Colin was lucky,” he said. “If there had been another stage…”

It was hard to argue. Had there been one more stage to do before service in Penrith, McRae wouldn’t have made it.

Colin was lucky. If there had been another stage... Carlos Sainz

But there were two more stages after Penrith. Grizedale. “Grizzly” to the world’s fastest rally drivers. And more grim memories for McRae, who’d seen the Lake District stages end his chances of a home win in 1991 and 1992.

Not this time. Colin won both Grizedale stages to lop a further 18s from Sainz’s advantage.

Turning south for two days in Wales, Sainz felt his chances would improve on the country’s wider roads.

“We’re on the limit,” McRae told Motoring News journalist David Williams. “We can’t go any quicker without taking chances. The problems we’ve had today haven’t been [because of] taking risks, just bad luck.”

Two days and 39s separated the Subarus in the fight for this year’s World Rally Championship title.

Eriksson eased his way clear of the best of the rest in the pursuit of the podium’s provisional bottom step. Pundershaw puncture aside, his Mitsubishi ran without fault for the remainder of the day.

Under strict instructions from Prodrive to finish, Richard Burns took a measured approach to much of Kielder, but was still quick enough to keep Thiry’s fifth-placed Ford at bay. Alister McRae moved into the top six, with former Nissan team-mate Gregoire de Mevius in another Escort RS Cosworth one place further back.

Cabot Bigham “over the moon” with rally debut