One is a brooding, deep-thinking Spaniard, the other a swashbuckling Scot. Sainz has two world titles, McRae’s yet to make his mark on the FIA’s season-long silverware. This time next week, the matter will be decided.

But will the 1995 crown come to rest in Lanark or Madrid?

One thing which can, apparently, be taken as read is that there’s no hang over after the PR disaster that was Subaru’s one-two-three in Catalunya last month. The team orders debacle which left Sainz the winner and McRae the runner-up (with Piero Liatti third) left both drivers with a bitter taste in their mouth.

Sources within the Banbury-based Subaru World Rally Team have confirmed the two have made their peace. Certainly, neither has any particular appetite for looking back and raking over what was one of the season’s more unsavoury spectacles.

For both, the week ahead couldn’t be more straightforward: finish ahead of the other and the title’s done. A win is the cleanest and classiest way to bring the season to a successful close.

Recent RAC form calls the deal in McRae’s favor. He dominated last year’s rally, leading from the third stage to the finish. The only potential for him losing would have come if Subaru team principal David Richards had been forced to ask him to slow down to allow Sainz a win to bag his third title and DR’s team’s maiden drivers’ crown. But when Sainz crashed off the road in Dyfi, McRae’s progress towards a historic first British home success since Roger Clark’s win in 1976 was assured.

McRae was majestic in the British forests 12 months ago. Having led the event for the previous three years, he finally delivered on that promise. And delivered in emphatic fashion.

The home hero’s recent experience of the RAC is greater than that of his team-mate and rival, with Sainz’s forgettable 1993 season aboard a Jolly Club-run Lancia Delta HF Integrale culled before the season-closer based out of Birmingham.

It’s no secret that Sainz starts this week as the more successful of the two drivers, both in Britain and in the wider world. He’s a two-time champion who has already landed two RAC victories.

What’s often overlooked is that the pair started their first RAC in the same season: 1987. Sainz wheeled a Ford Sierra RS Cosworth to an admirable eighth place – a solid debut for a southern European driver not used to competing on ‘blind’ rallies without pacenotes (but 14 minutes behind Colin’s dad Jimmy, who finished third in another Sierra). 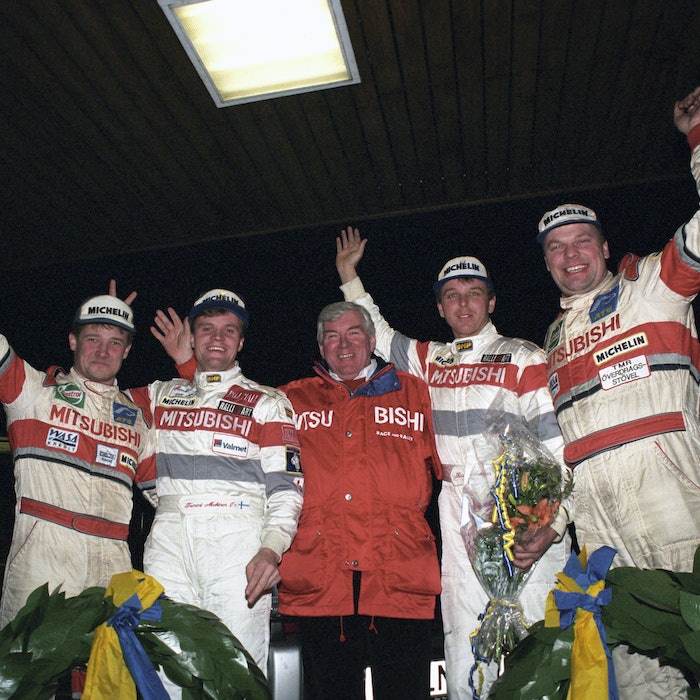 1995 REWIND: THE BEST OF THE REST HEADING TO THE RAC

THESE CREWS CAN'T TAKE THE WRC TITLE, BUT THEY CAN WIN THE RALLY

The younger McRae was further down the order, but put his Vauxhall Nova off the road in Dalby.

While Colin has started one more RAC than Carlos, the Spaniard has more relevant experience in four-wheel-drive cars.

Looking at the numbers, the statistics, everything points to a Sainz win.

But the combination of home support and the chance to catch the tail-end of the wave he crested and rode last year, should give McRae a slight advantage. The RAC remains one of the few rallies around the world which still favors a home driver, in terms of understanding the weather and its likely impact on the road – and grip level – ahead.

Everything is set for an absolute thriller of a finale, with the added edge of Sainz departing Subaru following the final stage. Originally bound for a return to Toyota, his manager is now revisiting discussions with other teams about a potential way forward for him next year. But it won’t be with Subaru.

Will that impact on the team’s approach with the two cars? Not a bit of it.

The only potential for team orders comes in the pursuit of the manufacturers’ title. Subaru currently sits a couple of points adrift of Mitsubishi, but with three Group A factory Imprezas lined up against just the two Lancer RS-E3s of Tommi Mäkinen and Kenneth Eriksson (with Rui Madeira’s Group N car a third potential point-scorer), you’d have to fancy Banbury over Rugby.

The third Subaru will be driven by 1993 British Rally Champion Richard Burns. This will be the Reading driver’s sixth RAC start, but only his third in a four-wheel-drive car. Burns has endured a quiet season, blending the odd World Rally Championship outing with some Asia-Pacific Rally Championship action with Subaru.

Burns demonstrated superb pace on this event two years ago, coming off the back of that British title to place his Elonex-backed Legacy RS seventh on one of the snowiest events in recent memory. Last year didn’t go to plan, after he fell foul of Kielder and retired with suspension problems in Pundershaw.

A good result would be the perfect way to sign off his time with Subaru, as Burns and co-driver Robert Reid join Mitsubishi for next season.