Hyundai Motorsport team principal Andrea Adamo believes “we never saw” the true performance of the new i20 N Rally2 last weekend, despite it winning WRC2 on its debut.

The new car is the second produced by Hyundai Motorsport Customer Racing after the i20 R5 that was first unveiled in 2016.

Oliver Solberg and Jari Huttunen were tasked with driving the car on the Ypres Rally – a traditional event for new R5 and Rally2 cars to debut on, with the Ford Fiesta R5 and Rally2, Peugeot 208 T16, and original i20 R5 all making their maiden appearances in Belgium, albeit as course cars and not in competition.

M-Sport’s Teemu Suninen led the WRC2 contest early on last weekend before making a mistake, picking up a puncture and overheating his engine, which released Solberg into the lead with Huttunen, who also suffered a puncture on the same test as Suninen, second.

Solberg led throughout the entire second day despite completing over half of the stage miles without power-steering, but relinquished his lead on Sunday morning as his Hyundai refused to start out of parc ferme.

The baton was therefore passed onto Huttunen, who brought a class victory home for Hyundai on the i20 N Rally2’s debut, although he too had to battle without power-steering on the final stage.

Asked for his assessment of the new car’s debut, Adamo told DirtFish: “When you debut and win, it’s always good. It’s true that I’m trying to be serious always and it’s difficult just to say how I feel.

“I asked the drivers, on the first day especially, to go through the stages. They never did Ypres before, it’s a brand new car, they did good times, and then all of a sudden we found ourselves in the lead with a huge margin because someone [else] has a problem. 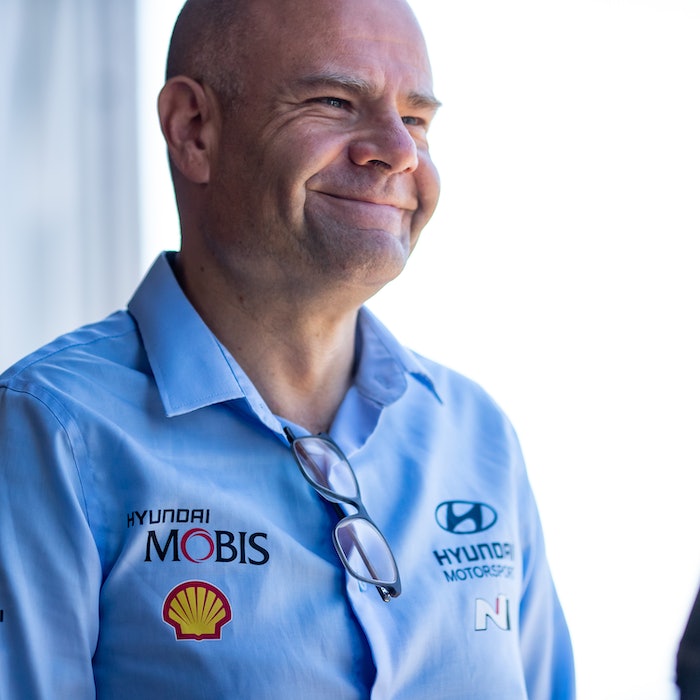 We never saw the performance of the car here. We weren't here to show the car’s performance Andrea Adamo

“Once you are there, I told my drivers to not even put the car into fourth gear. You are 1-2, etc. It’s what we have to do.

“So I think that we never saw the performance of the car here. You can say they are [fast], but we are here for WRC2. Not to show the car’s performance.

“I could have put in a local special driver who knows the roads upside down,” Adamo added. “So we were here for another reason, also to gain experience on it.

“We had an issue in the steering hoses that we never had before. Of course if we had, we would have sorted before. You know me, I’m not here playing cards.

“And finally we won WRC2, so good. But if you ask me: are you happy with what you have seen? How can I be happy with something that came out of the sky without fighting for it?”

Adamo was slightly frustrated that Solberg’s power-steering issue occurred twice, as the second time it broke appeared to be down to human factors.

“I always say to my people when s*** comes along, you don’t need to go chase for it,” he said. “But looks like we also went to chase for it.”

But there was no overriding concern about the issue, as finding such problems was exactly what Ypres Rally was all about.

Solberg will drive the i20 N Rally2 again on next month’s Acropolis Rally Greece, which is likely to be an even tougher test of the car’s credentials.

“We tested a lot for one year, but you know rallying,” Adamo said. “I don’t know if there are people who say that the mechanical [issues] are a ghost banana skin. Maybe some mechanical parts, they feel the pressure themselves.