Ever since its inception back in 1973, the World Rally Championship has always been a mixed-surface contest. There are gravel rallies, snow rallies and asphalt rallies; and this diversity is what makes it so captivating to follow.

Gravel however has traditionally been the dominant surface, with over half the calendar comprising of loose surface events for several years now. This season, the equation is slightly more balanced with five asphalt rallies from 12 events.

The most recent of those was last week’s Ypres Rally in Belgium, but it’s somewhat fair to say the on-stage contest was hardly a thriller. That prompted a question from David Evans on the latest episode of SPIN, The Rally Pod: are asphalt rallies entertaining enough for the WRC?

You can hear the full discussion on our podcast (above) from about 22:30. But we also asked our team of writers the same question, and here’s what they had to say on the matter.

Change the format, keep the surface

The possible outcomes of a rally and its story written as its denouement approaches are affected by several variables: car, driver, weather, tires, stage conditions. And probably a couple of other things. But in a broadly simplistic sense, those are the core components.

Here’s the problem: when tires have converged on one supplier due to cost (and anyone not picking the same compound as everyone else is destined to lose time), cars have neared the end of their development cycle, the weather is the same for all crews, and all the era of surface specialists in factory teams is long gone, there aren’t a whole load of variables left which can kick in and radically alter the plot as it unfolds.

Asphalt rallies – at least those fitting the mould of Ypres and Corsica, were it to return – are now destined to be boring.

Croatia was widely praised as a more entertaining rally to follow than Ypres by the fans – on bobblehat social media, at least – and if I’d have to guess the reason why, it’s the surface: the roads varied wildly in quality and grip on offer, with several surfaces changes per stage.

It kept the drivers on their toes. Aside from pollution dragged onto the road (as Adrien Fourmaux found out to his cost), the stage surfaces last week were quite consistent. And an F1 circuit’s surface is definitely not going to offer a low grip surface.

But before we throw asphalt under the bus, there’s one thing to get straight first: the WRC needs asphalt. Multiple surfaces across a season is a trait embedded into the series’ DNA. To give it up and fill the calendar with gravel events would be an unjustifiably extreme reaction.

The Czech classic, a staple of the European Rally Championship, is a sealed surface rally on paper. But ask those who’ve driven it and it feels more like a hybrid of asphalt and gravel. And that unpredictability in the stage surface is the answer: it adds an uncontrolled variable.

But please, let’s not spend entire days on F1 circuits again. One stage is enough.

There’s a mystique to gravel

You know those moments in your interview when you think you’ve answered a question wrong? You think you’ve blown it. Certainly, you haven’t done yourself any favors.

That was me a good few years ago. The question was a seemingly innocuous one and I answered honestly.

The question came from then Motoring News rallies editor David Williams. Did I prefer asphalt or gravel rallies?

I love the loose. I was honest.

He winced. Just a little bit. ‘DKW’ was a straight-down-the-middle kind of a fella and it took a significant amount of beer to finally get him to fess up that he preferred Tarmac. He loved the likes of the Circuit of Ireland, lived for the likes of the Jim Clark and Ypres.

For me, Tarmac’s Tarmac. I went to school on those roads. I go to the shops on that surface David Evans

We agreed to disagree. Except we probably didn’t. I would have agreed with him, then bought him another pint.

But there’s no denying last week’s Ypres Rally was… well, it was just a bit dull. It was a stunning live watch, but the some of the TV was lacking a bit of skiddiness. Looking back, Croatia only offered two positional changes in the top five from SS9 until the finish. The Zagreb event was undoubtedly spiced up by Sébastien Ogier’s argument with a BMW 1 series.

When David Richards was in charge of our discipline of motorsport, he wanted to severely restrict asphalt rallying in the WRC. Corsica and Monte Carlo were about the only ones he would have sanctioned, largely because they were both still absolute classics in the early 2000s.

His concern was the lack of spectacle. In the dry, the cars don’t slide and don’t always look as impressive as they could. And when the weather turns wet in the mountains, the shot’s not always clear enough to show what’s going on. Ergo, what’s the point?

Compare that to a jump in the middle of a fifth or sixth gear corner on Finnish gravel – you know the pictures, the ones with the car completely crossed up in mid-air. Or some full-bore ditch-to-ditch progress through a sodden Welsh forest. And then we get to the challenge of picking a line through the rockiest of roads in Kenya. Or Greece.

For me, Tarmac’s Tarmac. I went to school on those roads. I go to the shops on that surface.

Gravel’s different, and snow’s even better. There’s a mystique in what the best of the best do on the loose. I get it, but I’m a million miles from ever being able to do it.

On asphalt, it’s about who’s best on the brakes, most efficient in mid-corner and quickest on exit. Largely speaking, there’s one line.

On gravel, you can carry way too much speed to the apex, yank the happy stick, back it in and get back on the gas while scattering the stones.

What’s not to love?

Ypres was an anomaly

In many respects, Ypres was always doomed to fail as a pure sporting contest given the wide disparity of experience levels between the drivers. Thierry Neuville had eight previous starts, Craig Breen had four and the rest had zero on a rally where previous knowledge of the unique nature of the roads counts for even more than usual.

So in terms of a show, Neuville versus Breen was what we all anticipated. Their team-mate Ott Tänak did his best to upset the billing by winning the opening stage, but it soon became a two-horse race.

But then one horse had two of its legs tied together, as Breen was held on a leash and ‘recommended’ not to challenge Neuville as the two had built a healthy advantage over the rest.

Had that instruction not come from Hyundai, who knows how differently we may be reflecting on Ypres? Yes, there was an intriguing battle for third place, but the battle out front was somewhat stale. If Breen had been driving for a different team to Neuville, I’m more than convinced we’d have had a race to the end on our hands.

The somewhat flat spectacle Ypres served up then was nothing to do with the event or the road surface, but a team’s tactical decision. Cast your mind back a few months to Rally Croatia – the last asphalt round – and I don’t remember anybody questioning the validity of asphalt rallying. That was an epic finish to a rather epic rally. I’d go as far as to say it was the most entertaining rally so far this year.

Questioning how entertaining asphalt rallies are therefore feels like a majorly snap judgement to me. In isolation, Ypres wasn’t a classic – although I can absolutely stand with my colleague David Evans’ synopsis that Ypres is a far more entertaining affair if you’re there than if you’re not.

But that doesn’t mean all asphalt rallies should be tarred with the same brush. Croatia, the Monte and Monza for example were all interesting events. I’m simply not convinced the surface is what really makes an event entertaining, it’s all about the variables.

Arguably on gravel you are guaranteed more of those because the road sweeping effect is far greater, but is Sébastien Ogier running lower than he deserves to on Friday before fighting back on the next two days really that interesting? I’d argue it’s entirely predictable.

And Rally Estonia was hardly a classic was it, our brains just look back on it fondly because Kalle Rovanperä took an historic victory. 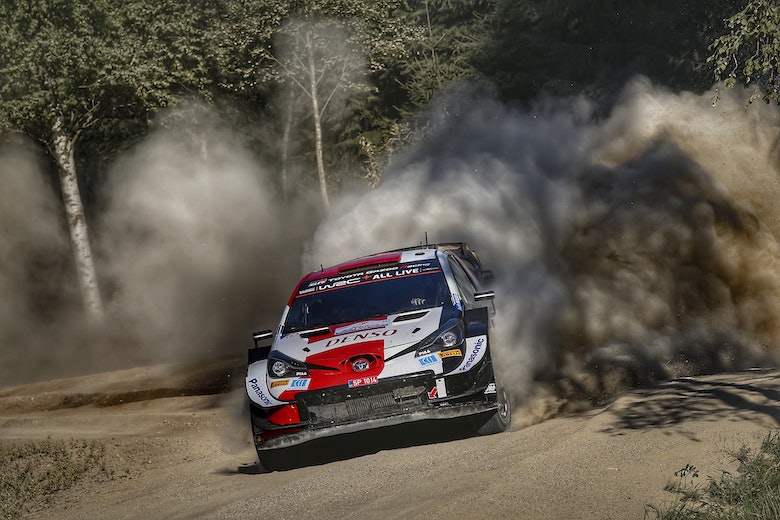 The symbolic significance of Rovanperä's win

I can accept some of David’s arguments around the mystique of gravel and the various lines available for drivers to take. But everything in life has its pros and cons. To me there’s something equally satisfying in watching rally drivers channelling their inner circuit racing driver, it’s all about what makes them adaptable.

Plus, anybody that tells you they prefer the look of a World Rally Car in gravel-spec over asphalt-spec is lying to you, or themselves. Rally cars – ideally, with lamp pods on the hood – in Tarmac-trim look absolutely savage.

Ypres was an anomaly. Let’s see what Spain and Japan (if it goes ahead) deliver before rushing to any premature conclusions.

Why rally knowledge is useful for open-wheel oval racing