Craig Breen took his second Ypres Rally stage win in a row on Saturday morning by winning the delayed Dikkebus test, which was canceled and then restarted following a crash for Takamoto Katsuta.

Breen and Hyundai team-mate Thierry Neuville are fighting for the rally win, and a run through Dikkebus that was 1.3 seconds faster than Neuville means that Breen has now halved Neuville’s lead since the start of the day down to 3.5s.

“It was tricky but I really enjoyed that stage,” said Breen. “Really nice run in there, I enjoyed the rhythm.” 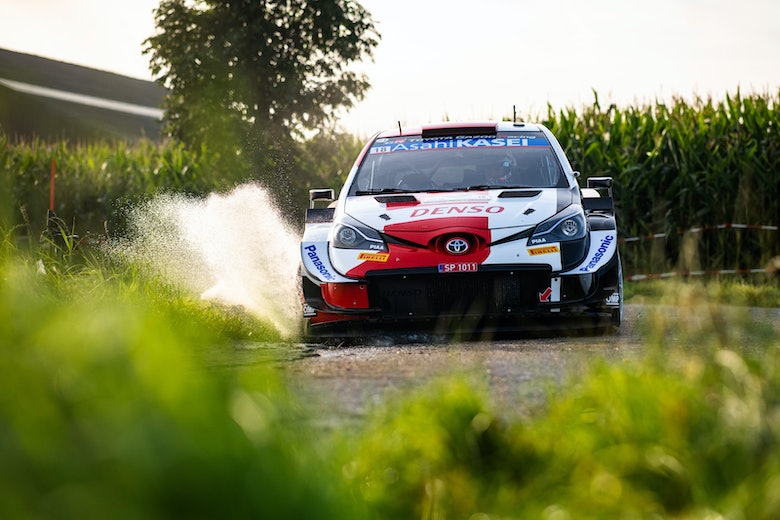 Neuville was second fastest and was not worried about having his lead on his home World Rally Championship event cut.

“I think the gap [to Breen], that’s not the issue,” he said. “The main gap we have to look is the gap behind Craig

“I feel comfortable, I’m maybe avoiding a little too much the cuts, because I’m really afraid about the punctures.”

Elfyn Evans moved into third on the previous stage as a result of Ott Tänak getting a puncture, and he retained it on SS10 but is only 1.3s ahead of Toyota team-mate Kalle Rovanperä.

“It was difficult to get going with the rhythm, with the cold tires obviously,” said Evans, who was the first driver through after the red flag stoppage. “Not an easy stage, quite a lot of bumps in there, which was quite tricky and a few surprises.

Tire temperatures were an issue for Rovanperä too.

“It was difficult to start with the cold tires,” he said. “I think this stage is trickiest of the loop. [There was] a lot of grip changing, I was not so confident.”

Despite his lack of confidence, he was third fastest on the stage.

Tänak was 0.7s slower than him, and said his event “is just about learning now” as he has dropped to sixth since his puncture. It was seventh prior to Katsuta’s day-ending crash.

Sébastien Ogier was initially missing from the lead order after completing the stage at transit speed, having started shortly before Katsuta’s off, but was promoted back to fifth after he was awarded the same stage time as Evans.

WRC3 leader Yohan Rossel is now up to seventh overall following Katsuta’s exit, while Oliver Solberg (pictured above) in the new Hyundai i20 N Rally2 still leads the WRC2 classification in 10th but is contending with a loss of power-steering.

He said it started leaking slowly on SS9, then broke halfway through the next stage and has cost him over half a minute.