The small – very small – slither of silver lining to the clouds which gathered following the news of Hannu Mikkola’s passing has to be the stories which have flowed from around the world.

We’ve collected a few of those tales here on DirtFish and have even more for you here.

Swapping co-drivers and the loss of Finnish rally legend Hannu Mikkola are two of the early storylines from the first two rounds of this year’s World Rally Championship.

Phil Short is one man who can associate with both of those stories.

In 1984 the Scottish Rally and Rally New Zealand were separated by just 10 days. Mikkola was scheduled to drive an Audi Quattro A2 on both.

The German manufacturer decided to send Mikkola’s regular co-driver Arne Hertz direct to Auckland, so he could get ready for the WRC counter, and asked Short if he could step in for the Glasgow-based British Rally Championship qualifier.

DirtFish is delighted to bring you a selection of Mikkola memories from Short, the godfather of rallying’s greatest ever dynasty Jimmy McRae and his old co-driver Ian Grindrod during their time in rallying with the friendly flying Finn.

Being part of the Ford set-up in the late 1970s – co-driving for John Taylor – I got to know Hannu quite well as a team member. When Ford did the Monte Carlo Rally in 1979, I was one of the ice-note crews for the team, working under the late Henry Liddon.

In those days it was a different arrangement from now: each ice-note crew was allocated one stage for each day and we prepared the ice notes on that stage for all four Ford drivers.

On that event Hannu and Björn Waldegård were driving Escorts, while Ari Vatanen and Roger Clark were in Group 2 Fiestas. Björn’s notes were Swenglish but OK, Ari’s were a bit inconsistent and Roger’s weren’t ideal.

So, we did our work based on Hannu’s notes, which were in English and very clear and straightforward. It was quite a busy time, transposing that information onto four sets of notes.

Monte went well and, after that event, Hannu seemed quite happy with my work and asked me to be his ice-note crew again whenever I was available, so I did that job for him on several occasions and with several teams.

In 1984 I was Audi UK’s resident co-driver. Among other things, co-driving for Harald Demuth and Darryl Weidner as well as doing other stuff such as working in Audi’s High Performance Driving School.

Audi had already used me to win the 1982 Welsh Rally with Björn. I was released from my Ford contract for that event as Ford was testing the RS1700T and [then Ford team principal] Peter Ashcroft wanted to know how that car compared with the Audi!

As the 1984 Scottish Rally was very close to Rally New Zealand, it was decided that Arne Hertz would go to New Zealand early to make the pacenotes and that I would step into the Audi UK Quattro with Hannu in Scotland.

We were always expected to win the Scottish, but the Opel Mantas gave us a hard time on the faster stages, I recall.

For me, it was a great experience to sit alongside such a fantastic driver. Hannu was very easy to work with, polite, considerate and, as many have already stated on DirtFish, a real gentleman.

The Audi Quattro was Hannu’s car; he’d developed it, understood it, knew how it worked and what it should – or should not – be doing under competition conditions.

But it was a real privilege to drive with the maestro at his peak – don’t forget, he was the reigning world champion at the time. It was incredible to see what he did with the car: so smooth yet fully committed, an absolute masterclass and one I will always remember.

While we were together on the event and over the subsequent years, Hannu and I shared plenty of stories.

The one that sticks with me is his tale of fee negotiations with Mercedes [which he drove for on four 1980 rallies].

When he went to Stuttgart for the contract discussion with Erich Waxenberger, Hannu thought he’d better go armed with some figures. So he took his annual Ford fee and doubled it, just as a starting point in negotiations – fully expecting to have to come down a bit from that.

“OK,” said Waxenberger, “no problem, we will pay you that amount per event!”

Of course, the Mercedes didn’t really work as a rally car, but soon Audi came calling and Hannu then had the Mercedes contract fee as a starting point for his next negotiations. But I think you’ll agree that, whatever the amount, Audi got its money’s worth from Hannu!

As part of the Audi set-up I met Hannu many times and we always enjoyed each other’s company. In fact when he went to Mazda in 1988, he tried to persuade me to join him as his co-driver there, but at the time I felt I had unfinished business with David Llewellin.

I was proud to be Hannu’s team manager on his final WRC outing in 1993, when he drove the 1000 Lakes with TTE. We were trying some traction control electronics on the Toyota Celica Turbo 4WD and it made quite a nice story to run Hannu – at the age of 51 – on his home event.

We often bumped into one another on subsequent events, usually in Finland when he was buzzing around in his helicopter. But he was always the same, friendly Hannu, wherever or whatever the situation. To me, he will always be a true legend. But as well as that I will miss him as a good friend. His is a very sad loss to rallying.

Jimmy McRae and I were doing the Scottish in a Rothmans Opel Ascona 400. Hannu was in the Audi and had a big problem with a broken track control arm on stage one in Strathclyde Park.

He dropped a lot of time in there, but fought back through the field (winning 35 of the 47 stages run) and was back in front with three or four stages to go – eventually pushing Jim and me back into second place.

If you watch the YouTube clip of the event, the main man who helped Hannu and Arne kicking the front wheel straight in that first stage was none other than Jim’s brother-in-law Hugh Steele. You just couldn’t make it up!

Fast forward to the Acropolis Rally the same year and we’re out on the recce and had stopped at the Kalafati Hotel in Itea.

This is a very famous stopping-off point back in the day. In the restaurant, Jim and I were enjoying the company of Hannu, Arne, Markku Alén and Ilkka Kivimäki. Prior to having dinner, we had spotted a bottle of Glayva [whiskey liqueur] on the top shelf behind the bar. It was covered in cobwebs.

When the time came for ice cream, both me and Jim asked the proprietor, Andreas, to bring us the Glayva to put on our ice cream.

Of course the bloody Finns couldn’t resist a new additive to their ice cream so they demanded the same. Needless to say the Glayva that had adorned the top shelf of the Kalafati for some 20 years was gone in a matter of minutes.

We came back to the UK to do the Scottish Rally and then returned to Greece to complete the recce for the Acropolis and then do the rally.

On the way back Jim and I bought a bottle of Glayva in duty free and took it back to the Kalafati for Andreas to put back on the top shelf. It’s probably still there!

There’s one more thing I really must pass on about Hannu and Arne. It was universally thought that the foreign crews were at a disadvantage when it came to the RAC Rally, when it was a fully blind rally and contested using maps rather than a recce and pacenotes.

In 1979 Tony Pond and I were on the recce for the Manx. We were staying in the same hotel as Hannu and Arne and we were discussing the RAC Rally that would follow in a couple of months.

Arne had his maps for the RAC with him and brought them down to show me some of the dangerous places he’d marked on some of the stages that had been used in the past. He was quite happy to share these places with me – he had so much knowledge of the British forests.

That’s just one of many reasons Hannu and Arne will always be a pair of absolute legends.

McRae also vividly recalls his battle with Mikkola on the 1982 Scottish. On hearing that Grindrod had undoubtedly missed out some of the detail, the five-time British champion told his side of the story

I think we were fastest in that first stage in Strathclyde Park. Coming out of there, I remember Ian saying: “Hannu’s off…”

You never want any of your rivals to go out that early or have problems, but those Audis were so, so difficult to beat. Even when we were going downhill on some of the really fast stages, they were still taking a couple of seconds a mile off you.

Anyway, we carried on with the event, headed down south to Peebles and through Dumfries and down to the Borders. Then we turned north. I don’t remember if we stopped off again in Glasgow for an overnight or not, but we went all the way up the Great Glen to Inverness and over to Aberdeen before we went back south to the finish.

We were doing something like 400 stage miles, they were incredible events. And all the time Hannu was setting more and more fastest times. I was pushing our [Opel] Ascona [400] as hard as I could. I was driving my nuts off! Then Ian turned to me and said: “I think he’ll catch up with three stages to go…” I told him I couldn’t do anymore without going off.

After the event, he came to me and said: "I’m sorry about this Jimmy" Jimmy McRae

Sure enough, he caught us and went on to win. I was so disappointed. Talking to Hannu towards the end I told him what Ian thought and he said: “Yeah, Arne [Hertz, co-driver] made the same calculation…”

Anyway, it wasn’t until I caught some of the coverage of that first stage in Strathclyde Park that I was even more disappointed. Hannu had broken the TCA and the wheel was at 90-degrees. I think he’d pretty much given up and was ready to retire, thinking he’d never make it out of the stage. That would have been my first win on the Scottish.

But then you could see this bloke kicking wheel, telling Hannu to get back in the car and get going. “Go, go, go,” this guy was shouting. Turns out it was Shug [Hugh Steele], only my bloody brother-in-law! When I saw him after the event I tackled him about it.

He said: “Oh, Christ! I never thought of that. I could easily have kept him there for a minute or so.” I mean, bloody hell! And it wasn’t just Shug, it was the whole of Coltness Car Club – my car club there pushing Hannu back up the road.

But there was no stopping Hannu once he was back on the road after that first stage. He was flying. He’d the bit between his teeth and he wanted the win. After the event, he came to me and said: “I’m sorry about this Jimmy.”

At the time, you’d have given anything to beat Hannu in the Audi. He was a special driver and a great guy.”

Mikkola’s hardest-fought success – in his own words 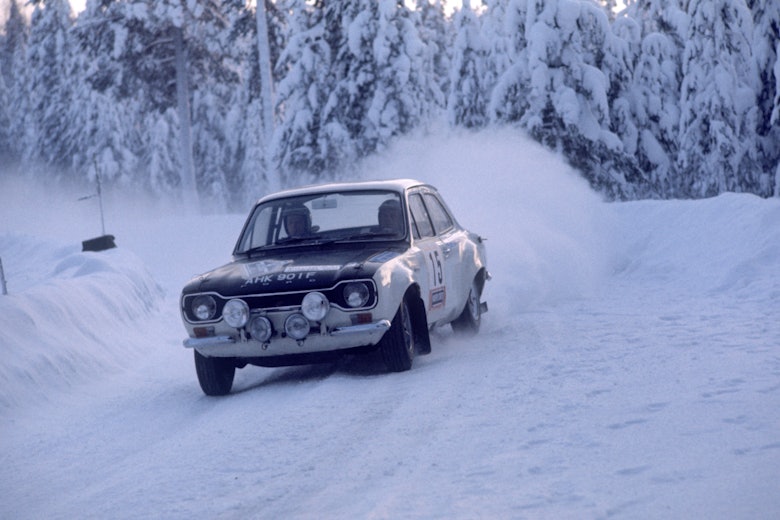 The lasting memories Mikkola will leave behind 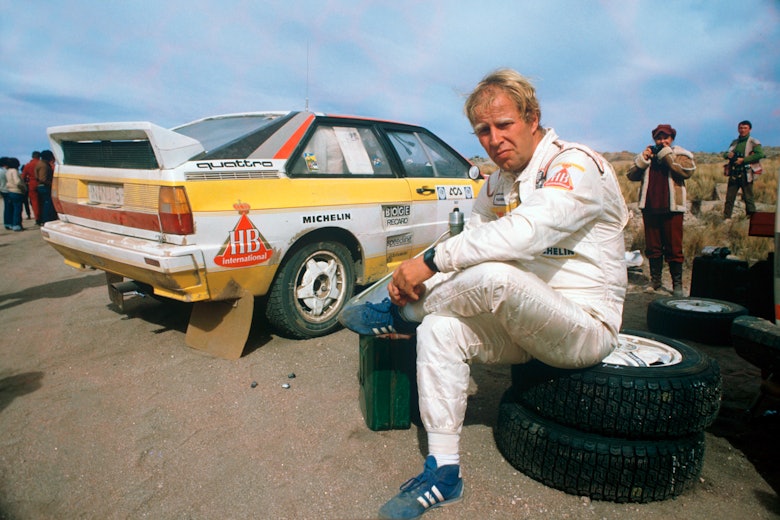