Kalle Rovanperä opened the door and motioned me in. We were a couple of days out from Rally Finland, and this was his downtime.

Opportunities to hang with the world championship leader don’t come along every day. Kalle couldn’t see what the big deal was. It was just him showing us his place.

There’s an increasingly common misconception that Harri’s boy is in danger of getting old before his days. Certainly, the experience and maturity he’s shown since stepping up to the sport’s very top level for the 2020 season would lend weight to that theory.

But back in August, Kalle was just another 21-year-old enjoying his new car.

Both the location – and contents – of the place DirtFish had been invited to will remain the requested secret, for obvious reasons. Which is just as well, seen as I’ve forgotten where it was or how to get there.

Asphalt recently etched with rubber rings indicated we might be in the right place. We were. The donuts had come courtesy of a Toyota with twice the power of his GR Yaris Rally1, but half the driven wheels.

Kalle has an appreciation for cars which goes way beyond rallying. He’s already banked some absolute beauties, including mundane-looking road-going classics right through to machines powerful enough to rip up rather than just paint the car park.

All of them in-keeping with his current employer.

What does he do with them? 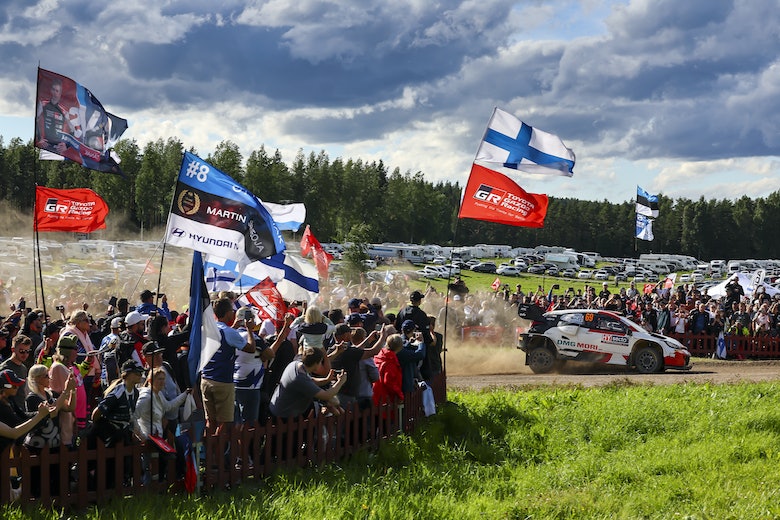 What Rovanperä's title means for Finland

“I drive them,” he laughed. “Sunday afternoon. Or Sunday night. My friends and I go for a drive. And maybe an ice cream.”

Finland has a great car cruising culture. Weekend after weekend through the summer, stand in the center of any Finnish town or city and you’ll some of the best-looking, coolest and best-kept cars around. And they’re just driving.

It’s what you do when you’re 21. And it won’t have changed in the days since he turned 22.

Rovanperä has to be one of the most grounded world champions in the history of our sport – undoubtedly something to do with it coming so quickly in his career. But take him out of the service park and he’s an engaging, interesting and interested character.

For him, when he’s home, nothing has changed. And home will always be Finland. Even if his house is across the Baltic Sea in Estonia.

“My friends are still the friends I always had,” he said. “When I’m around, we do stuff together. They don’t treat me any differently – because nothing is different. They have known me for a long time.”

The service park Rovanperä is different. He’s totally focused, happy to take a back seat when it comes to working the media. He keeps his head down and gets on with his job. He’s polite, but efficient with his comments. There’s no point talking if you’ve got nothing to say.

That’s never changed. And neither is it likely to.

I first met Kalle as a 14-year-old, back when he was driving the Rovanperä Racing Citroën C2 R2 Max when he was humbling the best of the rest in Latvia. His speed at that point was interesting, but it wasn’t exceptional.

It was the same six years earlier. We’d all been transfixed by the sight of an eight-year-old installing a cushion behind his back and blocks on the pedals before hopping aboard and merrily slinging the rear-wheel drive silver dream machine between the snowbanks.

His natural ability to understand what a car was doing and how to control it was evident from the very beginning. But like the Citroën, the Starlet could only offer so much pace.

Kalle’s test ahead of Rally Alūksne was what opened my eyes.

Standing at the side of a road in Finland waiting, I had no real idea of what to expect. He was 15 and a bit, driving a Škoda Fabia S2000. I’d selected a high-speed, left-right flick which didn’t need much more than a lift in top gear.

There wasn’t a hint of a lift as the Fabia’s two-liter screamer held its note for way, way longer than I’d expected.

Risto Pietiläinen was co-driving Kalle then – at the request of his former driver, Rovanperä Sr. 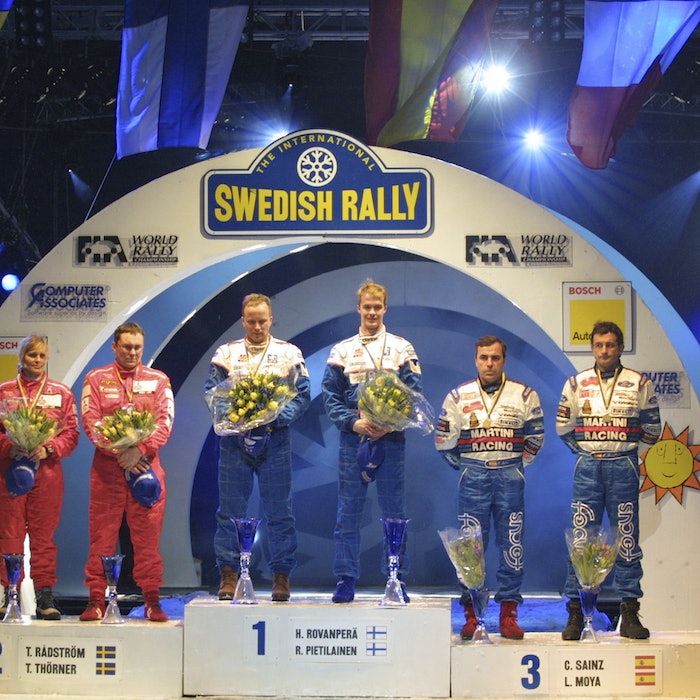 Harri asked me to look after Kalle a little bit, but I think it won’t be long before his speed is too much for me Risto Pietiläinen

Climbing out of the car, Pietiläinen caught the look on my face and started to laugh.

“I know what you are thinking about,” he said.

“Harri asked me to look after Kalle a little bit, but I think it won’t be long before his speed is too much for me.”

He won Alūksne and a whole load more Baltic events to boot.

I’ll be honest, at that time I genuinely feared for Kalle. I simply couldn’t get my head around a 15 or 16-year-old having the depth of experience to drive at that speed. Our sport is so different to racing. We have so many variables – not least the grip level – which change from corner-to-corner. A solid understanding and no end of know-how gathered across the years is the only way to deal with everything our sport can throw at a driver.

Or so I thought. Kalle is the first driver to take that rule book and tear it to pieces.

There’s nothing he can’t do in a rally car.

I’ve been fortunate to experience it firsthand as well, testing with him at Škoda before his switch to Toyota and the big time. Up close, the unruffled, stress-free style of driving was breathtaking. Corners came and went in the blink of an eye, dealt with by a driver who looked barely old enough to drink the champagne he was now celebrating success with on a near weekly basis.

While he might have already tested Toyota’s Yaris WRC in 2016 (aged 16) he would have to wait a while for the topflight. Days after his 17th birthday, there was a largely unremarkable WRC debut, when Wales caught him and a hired Ford Fiesta R5 out in 2017. One rally on and he scored a lonely maiden WRC2 win in Australia.

Then came two seasons with Škoda. He only really needed one. If that.

As well as wins and titles, his time with a factory Fabia R5 demonstrated a near unbelievable maturity.

Rally Sweden, 2019 [pictured above], was a case in point. Caught out early on, the Fabia nosed a snowbank and got sucked in. No panic. Spectators were on hand to follow co-driver Jonne Halttunen’s instructions.

What did Rovanperä do? Took his hands off the wheel and folded his arms as the car was manhandled back to the road. There wasn’t so much as a flicker of emotion from the Finn. Facing the right way again, he pulled first and was back on his way. No drama. No histrionics. Just quiet, self-assured progress towards the big time.

His move to Toyota at the top of 2020 was one of the worst-kept secrets for a very long time. A deal was reckoned to have been done between Rovanperä’s manager Timo Jouhki and then team principal Tommi Mäkinen years earlier.

Just months out of his teenage years, Rovanperä Jr was handed the keys to one of the fastest rally cars in the history of the sport. 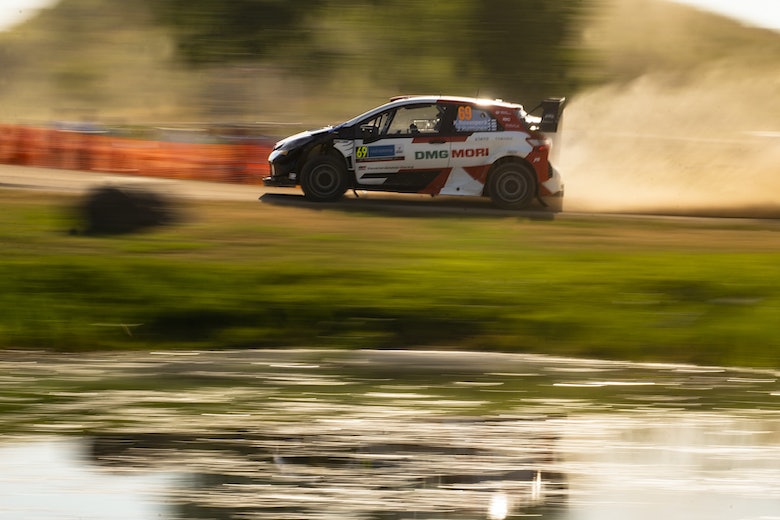 Understanding what makes Rovanperä so good

Again, a good few raised an eyebrow. Too soon?

While COVID stepped firmly in the way of a regular season, there were still enough rallies for Kalle to impress enormously. And lay the groundwork for Rally Estonia, 2020. Talking to folk in the inner circle and no end of people around the service park, there was a feeling that he would start the event as joint favorite with local hero and then defending world champion Ott Tänak.

Now, that was just bonkers. Eventually, he finished fifth, but things could have been very different had it not been for a puncture early on the opening day.

Twelve months on and things were different. Rovanperä eclipsed his now team principal Jari-Matti Latvala to become the youngest ever winner of a WRC round.

And that was that: he was on a road that would lead to last Sunday and the top of the world.

For Rovanperä, nothing’s changed – like he said at the top of this tale. He’s just a 22-year-old who enjoys driving cars. He just drives faster cars faster than anybody else on planet Earth.

The moves he pulled on top of the car in Auckland were a demonstration of how much the achievement meant to him. Later that night, Kalle, Jonne, family and friends celebrated properly.

This is, of course, just the beginning. But strange as it might sound – and this one does sound very odd – this is also the beginning of the end of the Rovanperä story.

Talking to Sébastien Ogier after the confirmation that the crown he’d worn for eight of the last nine years would be heading to Finland, the Frenchman smiled.

Rovanperä could be winning WRC titles for the next 20 years. But he won’t be.

Rallying has been Kalle’s life for the last 15 years. For a decade and a half, from the cushioned seat of that Toyota Starlet to dancing on the roof of a Yaris, all roads have led him to this point.

But this is just a chapter rather than the whole book.

Mid-way through this year, Rovanperä was bound for Ireland to drive a Toyota Supra at Mondello Park. He loved it. Loved it.

Drifting is like an escape for him, and the energy is obvious when you talk to him about it.

Rallying won’t keep Kalle for long. There’s a whole world out there for him to explore.

One thing won’t change though. When his summer schedule permits, he’ll still cruise the streets with his mates, looking for an ice cream.

Just like his dad, Kalle Rovanperä will forever be the everyday Finnish superstar.