Kalle Rovanperä has won Rally Estonia for a second consecutive time, claiming his fifth World Rally Championship win in six events to build a scorching 83-point lead at the head of the championship.

Despite utterly torrential powerstage conditions and no need to really push, Rovanperä scooped all five powerstage bonus points with an astonishing run that was 22.5s faster than Evans, while Andreas Mikkelsen was an incredible third fastest in a Rally2 Škoda.

“It was great again! Big thanks to Jonne [Halttunen, co-driver] it was a difficult weekend, we drove really well. Thanks to the team for making the cars fast and tough. We continue to push forward,” said the winner.

Craig Breen led Rally Estonia after the first stage on Thursday evening, but his rally soon unraveled when he went off on a quick, off-camber left-hander and slid into the undergrowth. But in sliding off Breen was unlucky to find a concrete pole that destroyed his front-left suspension and caused his retirement.

That left it to the two Toyotas of Evans and Rovanperä and Tänak’s Hyundai to slug it out for victory, and despite his lack of Baltic blood, it was Evans who was in charge across the first day – winning five stages in a row to move clear of Rovanperä.

That was until the final stage of Friday when the heavens opened. Running first on the road played into Rovanperä’s hands and the better conditions allowed him to overturn his 10.9s deficit into an 11.7s advantage.

From there, Rovanperä was simply untouchable. Quickest on all but one of Saturday’s eight forest stages, he flew into a 29.1s lead and left his team-mate flat footed and unable to respond.

A spin for Evans on Sunday morning exaggerated the gap, but Rovanperä just didn’t relent to lay down his clearest marker yet that this world championship really is his to lose.

Tänak had been at the races on Friday but a 10s penalty for a HEV breach on Thursday was the beginning of the end of his victory challenge. The penalty dumped Tänak behind Rovanperä and from there he struggled on with a Hyundai he wasn’t happy with to claim a distant third place.

Thierry Neuville hadn’t targeted a win in Estonia but he was uncharacteristically off the pace on round seven, unable to find any confidence from his i20 N Rally1. While Neuville is usually able to drive around his discomfort, he backed off the loud pedal in Estonia and finished two and a half minutes down on the rally winner.

Any potential push for powerstage points was thwarted when his windshield fogged up within the first mile and left Neuville with next-to-no visibility.

Fifth marked Takamoto Katsuta’s first ever finish on Rally Estonia at his fourth attempt – a well-judged drive that allowed him to grow in confidence.

Things didn’t start well as Katsuta crashed on the Thursday shakedown and was initially 11th after Friday’s first two stages that were new to him, but he kept his nose clean to rise up to fifth overall after all 24 stages.

Esapekka Lappi was left to claim a disappointing sixth place after looking odds on for fourth place ahead of Neuville.

But a landing over a jump de-beaded one of his tires (on the same stage and in the same fashion as Greensmith) and cost Lappi two minutes and ultimately three positions. It left Toyota’s part-timer struggling for motivation for the second half of the event.

However he did get a late surprise as he moved ahead of M-Sport’s Adrien Fourmaux on the powerstage.

“It was for sure the hardest gravel stage I have ever done in my life, I was out of control 100 times,” Lappi said of the powerstage. “But we survived!”

Fourmaux may have dropped a place but he still recorded his best finish of the season in seventh, consistently sticking close to Katsuta on the leaderboard but disengaged in any battle.

It’s a confidence-boosting result as aside from a spin on Saturday, Fourmaux made no mistakes and was the only M-Sport Ford driver to finish without retiring.

“Did you see the conditions? Yeah it wasn’t nice,” said Fourmaux of his 40s time loss to Lappi on the final stage.

“I didn’t take any fun, it was just s***. It wasn’t good conditions to drive. Lappi has done a good job actually as it was really tricky, but honestly I am happy for my rally. Only this stage wasn’t good but for the rest I am happy.”

Both Pierre-Louis Loubet and Gus Greensmith exited the contest on Sunday morning. They had been in the mix with Fourmaux before incurring problems.

Greensmith punctured on Saturday and was kicked to the back of the top 10, but he was out altogether on Sunday’s second stage when his Puma Rally1 developed a mechanical problem – a suspected transmission issue.

Loubet meanwhile had been building his speed up but was caught out in the rain late on Saturday, rolling his Puma after riding up a bank. Spectators soon righted the car and sent Loubet on his way, but his rally was over on Sunday’s opener when he clipped a rock hidden in the grass and damaged his suspension.

Oliver Solberg failed to score any points on what was tipped to be his strongest event of the season so far. The 20-year-old has good previous form in Estonia but struggled to live up to that on his first time in a top-class car on the event.

Where the rally really got away from him though was on Saturday. First a puncture and then a skid into a tree broke his power-steering, which prompted penalties for lateness and significantly hampered his pace for the rest of the day.

A brief off on the powerstage aptly summed up Solberg’s experience.

Mikkelsen edged Teemu Suninen in a thrilling fight for WRC2 honors, as the top three in class flooded the final three positions in the overall top 10.

Mikkelsen badly needed a win after retirements from the lead in both Portugal and Italy due to engine problems but was made to work hard for it by Hyundai’s Suninen.

The pair were closely matched throughout the contest, never split by more than 16.9s prior to the powerstage, but Mikkelsen looked to have it all under control until an inspired run from Suninen on a soaking penultimate stage whittled the gap down to just 3.2s.

But Suninen’s Hyundai dropped onto two cylinders and took the sting out of the fight, leaving Mikkelsen safe out front for victory.

Erstwhile category leader Emil Lindholm scooped the final podium slot, battling back from a puncture on the first day. His Toksport team-mate Marco Bulacia had held the place before going off on SS23 of 24.

Hayden Paddon’s WRC return was thwarted when he tested positive for COVID-19 at midday service on Friday. It had been a challenging rally for him anyway, lying eighth in class after struggling in the ruts (which he hasn’t experienced back home in New Zealand) and with a feeling from his Hyundai i20 N Rally2.

Sami Pajari won the Junior WRC category despite some hot pace from local driver Robert Virves who lost the lead when he bent his suspension. Jon Armstrong was third, setting up a tense finale in two months’ time at Acropolis Rally Greece. 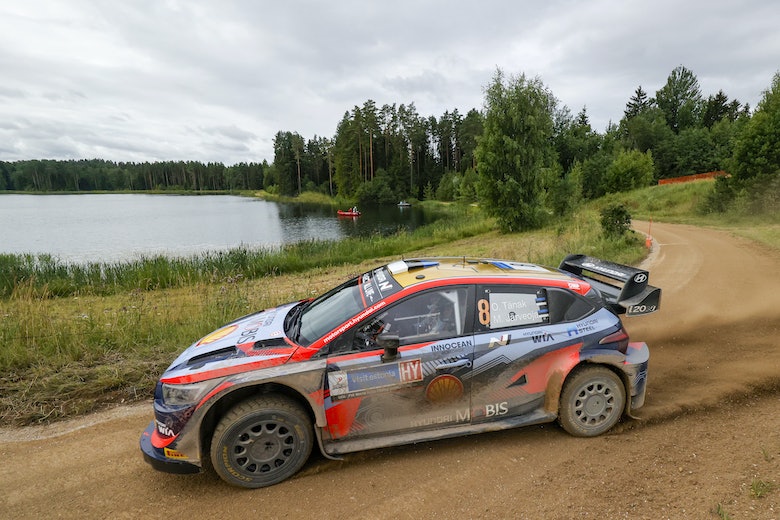