Even in the modern era of rallying, with its compact itineraries and consistent stage mileage across events, Safari Rally Kenya remains an endurance test. Pure speed alone will not bring a rally victory.

One Kenyan driver understood this better than others in the WRC3 category: Maxine Wahome.

On paper, Wahome was not a likely class winner. She’d never driven a Rally3 car before and her total career experience amounted to a year and a half rallying a Group N Subaru Impreza around East Africa.

While she didn’t know the car, she’d gotten her approach right, as shown by how her rivals’ rallies unraveled.

In amongst the several Kenyans piloting Ford Fiesta Rally3s was Paraguayan newcomer Diego Dominguez. He’d been the pacesetter early on and vanished over a minute up the road by the time Kedong rolled around.

But there’s a problem with that. This is Safari. It doesn’t take too kindly to those who think they can get the job done by being faster than everyone else. In Kenya, win it or bin it always ends with the latter outcome.

Dominguez found out that Kedong, the same test that had bitten the Rally1 crews hard, would be extremely unforgiving for the Rally3s too. A big front-end impact forced Dominguez to retire, which should have opened the door for Hamza Anwar. But he too would be bested by the fearsome Safari stages, getting stranded in the deep fesh-fesh sand. 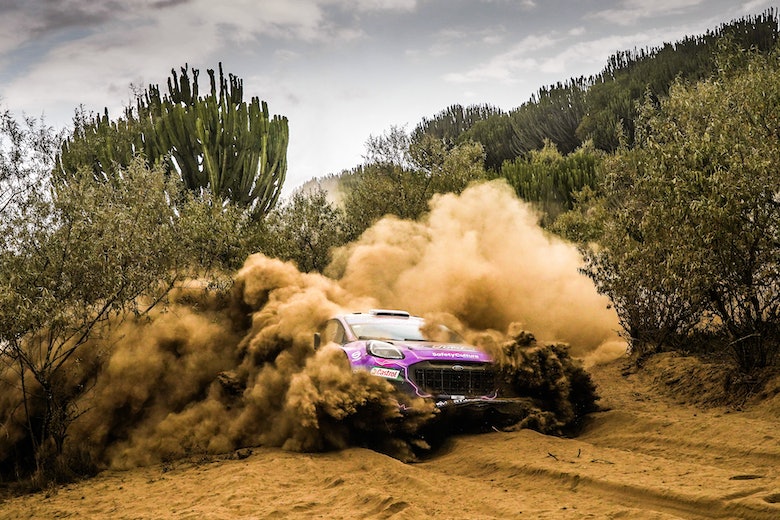 The Safari stage drivers didn't want to do

No such problems for Wahome. There were big scares, but no mistakes. ECU issues led to a retirement late on Friday and then a six-minute time loss on Soysambu.

That opened the door for Junior WRC regular McRae Kimathi to strike. But he too allowed himself to become a victim to the punishing and unforgiving stages, breaking his suspension with an impact against a rock.

With that, history was made. At her very first attempt, Wahome had become a winner in WRC3.

“I’m really speechless,” said Wahome. “[I’m] excited that I’ve made it and I’ve won the WRC3 class for the first time, the first lady to ever win it.”

It was an incredible result considering her learning curve. Not only had she never driven a Rally3 car, she’d not even driven anything with the steering wheel on the left-hand side of the car.

“It was completely different from what I was used to and I used to drive on the right, I didn’t have enough time for testing. So I’m testing it each day.”

Isabelle Galmiche had reset the clock on an important record in the co-driver’s seat at Monte Carlo earlier this year: the last time a woman was part of a rally-winning overall crew. Before Galmiche guided Sébastien Loeb to victory, it had been 25 years since Fabrizia Pons had done the same thing for Piero Liatti.

This time it was Wahome’s turn to make history. She reset the lengthy waiting period for the next female driver to win in a WRC support championship – all of 29 years.

Back then, Isolde Holderied was at the fore, competing against national champions Jorge Recalde and Jesús Puras for the Group N Cup. And she oh-so-nearly won it, thanks in part to victory on the Sanremo Rally, beating her far more experienced title rivals.

By then Holderied was nearing the peak of her career, already a factory driver for Mitsubushi Germany before a later switch to Toyota. She’d made it as a professional rally driver, in itself a rarity for women in motorsport despite Michèle Mouton’s success in the prior decade.

But Wahome has time on her side. This was her very first WRC event. And the first in a Rally3 car. As part of the Rally Stars program in Africa, she’s got a chance of progressing further and has clearly displayed how much potential she has to make full use of that support.

Winning for herself was one thing. Showing that women could take on the men and win was just as important for her.

“All my life, since I was 10 years old, I’ve wanted to empower women and encourage women to join,” she said.

Of course, Wahome did benefit from having the tools to make it happen. Support from M-Sport itself to run her Fiesta helped, but she absolutely maximized the package beneath her.

“I couldn’t believe that I had won. I’m proud of myself and my team, they helped me get the car and victory.”

We know with certainty that another female rally driver will have a shot at making their way up the career ladder in a Fiesta Rally3 next season – the FIA Rally Star contest has a seat saved for the best under-25 female rally driver its talent identification system can find.

For the next set of Rally Star finals coming up, perhaps Wahome’s WRC3 win will encourage them that it’s worth taking a shot.