Sébastien Ogier and Julien Ingrassia have won the World Rally Championship for an eighth time, securing it in style by winning the Monza Rally as Toyota also secured the manufacturers’ title.

The championship was led by Ogier by by 17 points prior to the season finale and he knew any kind of podium finish would be enough for him to sign off his full-time WRC career with another title.

Winning the event – on what is also co-driver Ingrassia’s final ever WRC rally as he won’t return for Ogier’s part-time program in 2022 – was the perfect way to seal it.

Beautiful scenes occurred at the stage finish as fans mobbed Ogier and Ingrassia’s car, and the duo even swapped on special celebratory helmets as they stood on top of their Yaris WRC.

“This guy is a legend also,” he said as he joined fans in applauding and chanting Julien’s name.

“You can imagine the emotions that I am having now,” said a tearful Ingrassia.

Despite what was at stake, Ogier was a Monza victory contender from the outset as he and Evans jostled for position throughout the rally’s first two days.

Ogier had an advantage on the mountain stages outside Bergamo but Evans was quicker on the circuit tests on Friday afternoon, leading the event by 1.4s overnight.

Saturday was even more enthralling as the pair switched positions five times across the day’s six stages; Ogier eventually winning out to take a 0.5s advantage into the final day.

The world champion suffered a scare on Sunday’s first stage though as he clipped a concrete barrier that comprised one of the chicanes on the famous Monza banking and was incredibly fortunate not to puncture his front-right tire – or worse.

He matched Evans’ time on the stage to remain 0.5s ahead before Evans fumbled on the penultimate test. Evans’ title chances were “a long shot” prior to the weekend and with Ogier disputing the lead with him rather than far behind he was consigned to his fate. And both wanted to win the rally.

However an overshoot and stall that was followed by another random stall later on the penultimate stage cost Evans 7.1s to Ogier – a deficit he was never likely to recover with just one stage left to run. He therefore took it easy on the powerstage with nothing left to gain.

“It’s been a pretty OK year. Of course, I can’t help but feel a little disappointed right now, you always look to the places you could’ve done better but I have to mention a big thank you to the team,” Evans said.

“And a special thank you to Kalle [Rovanperä] as well as he sacrificed his weekend so Séb and I could could go at it.”

Thierry Neuville had looked set to scoop the final podium place behind the two Toyotas but lost the rear on cold tires on Saturday morning and smacked the Armco barrier on the inside of a double-apex right-hand turn.

That sent Neuville into a half-spin and cost him 15s as well as his front bumper – hampering his attack on the succeeding two stages with a compromised aero package.

He had just overhauled Hyundai team-mate Sordo before his error but thereafter was restricted to fourth place, 10.7s behind Sordo at the finish.

“I just wanted to enjoy that last one and I actually did,” said Neuville, who went quickest on the powerstage.

“Five incredible years with that car, they were all very exciting and all very tough but I’m looking forward to the new adventure with the new cars.”

Oliver Solberg secured his career-best WRC finish in fifth overall, notching up the best result for the 2C Competition team as well as new co-driver Elliott Edmondson too.

Solberg was fifth from the very first stage and simply held onto it thereafter, ending a trying season on a high as he prepares for a step up to Hyundai Motorsport’s main squad in 2022 with an i20 N Rally1.

However he ended the rally “a bit p***** off” as he stalled twice on the powerstage, feeling he lost “at least eight to seconds”.

“I was aiming for the powerstage win, but another time,” he added.

Teemu Suninen completed a formation of four consecutive Hyundais in the top six on his debut for the works team, deputizing for 2019 world champion Ott Tänak who was absent from the event for personal reasons.

Suninen had been embroiled in a fight with ex-M-Sport team-mate Gus Greensmith on the final day and had begun edging clear but inherited sixth when Takamoto Katsuta crashed at a chicane on the event’s penultimate stage.

Katsuta lost it under braking, spun 180° and smacked a concrete block with his front-left wheel before spinning a full 360° into a haybale. The impact destroyed the front-left corner of Katsuta’s Toyota but he managed to drag the car to end of the test, albeit with the front-left wheel hanging out of the arch at an awkward angle.

Greensmith menacingly lurked just 3.7s behind before the powerstage but with his car repaired in just a 15-minute service, Katsuta was able to attack the final stage and beat Greensmith by 15.7s with an impressive powerstage performance.

“Thank you very, very much to the team for fixing the car,” Katsuta said. “I’m so sorry about my stupid mistake but without them I could not be here this season. And thank you to Aaron [Johnston], Keaton [Williams] and of course Dan Barritt.”

There were plenty of positives for Greensmith to draw though even if the result wasn’t as high as he wanted, as his new partnership with Jonas Andersson had proved to be a success.

Kalle Rovanperä was denied the chance to be a real feature of the Monza Rally as he was asked by Toyota to drive with plenty in reserve, effectively acting as an insurance policy should either Ogier or Evans fall by the wayside.

The team only needed to score five points on the final round to win its first manufacturers title since 2018. Rovanperä stuck to his brief perfectly to finish a subdued and distant ninth that will undoubtedly earn him plenty of internal kudos for being the perfect team player.

He did allow himself – and the fans – some moments of joy though, performing a series of donuts at two separate points on the powerstage, unusually running on snow tires in dry conditions.

“We had some issue with the pacenotes, there were some mistakes from Jonne [Halttunen]…” Rovanperä joked.

Adrien Fourmaux was the only World Rally Car entrant to retire at any point throughout the weekend. Electing to take soft tires for the first morning’s loop of four mountain stages with everyone else on hards, Fourmaux felt he’d made a mistake and bolted the two hards he was carrying in the trunk for SS3.

But in a slippery corner towards the end of the stage he was caught out, collided with a bank and was tipped into a roll across the road. His M-Sport Ford rolled over once, its front wheels coming to rest on top of a protective Armco barrier which ultimately saved him from a nasty fall down the side of a bank.

Fourmaux returned for Saturday and Sunday but finished outside the top 50.

The final place in the top 10 was secured by the leading Rally2 runner and WRC3 winner Andrea Crugnola in his Hyundai i20 N Rally2, but Yohan Rossel clinched the WRC3 title right at the death.

Rossel was battling Kajetan Kajetanowicz for the championship, beginning the event level on 127 points after his appeal into his Acropolis Rally disqualification was rejected.

The pair were glued together all weekend long, but Rossel held the advantage until the penultimate stage when Kajetanowicz snuck ahead. With Crugnola leading, it all came down to points scored on the powerstage as well as finishing position.

An inspired powerstage drive from Rossel allowed him to finish just 3.1s ahead of Kajetanowicz, 4.7s faster on the final stage, and claim the 2021 title.

On his debut for M-Sport, Jari Huttunen won the WRC2 class as both Toksport drivers Andreas Mikkelsen and Marco Bulacia hit problems.

Mikkelsen punctured on one of Friday’s circuit stages while Bulacia surrendered the lead when he overshot a hairpin on Saturday’s opening mountain stage, breaking the rear-right wheel.

Nikolay Gryazin beat Huttunen by 18.2s overall but was ineligible to score points for himself as he’s already entered his maximum permitted seven rounds.

However he was registered for team points and his first place for Movisport – which ran Volkswagen Polo GTI R5s for Esapekka Lappi and Suninen earlier in the season – ensured it beat Toksport to the teams’ title. 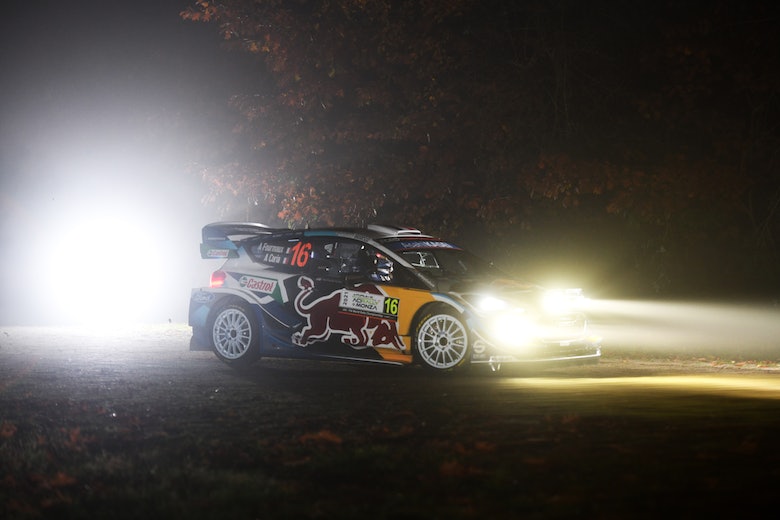 What Fourmaux will learn from his Monza crash 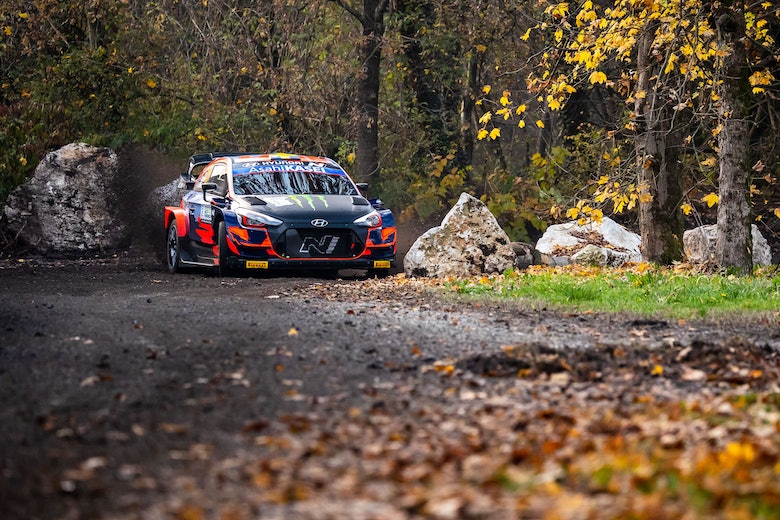 The glitch that made Solberg’s Friday even more impressive 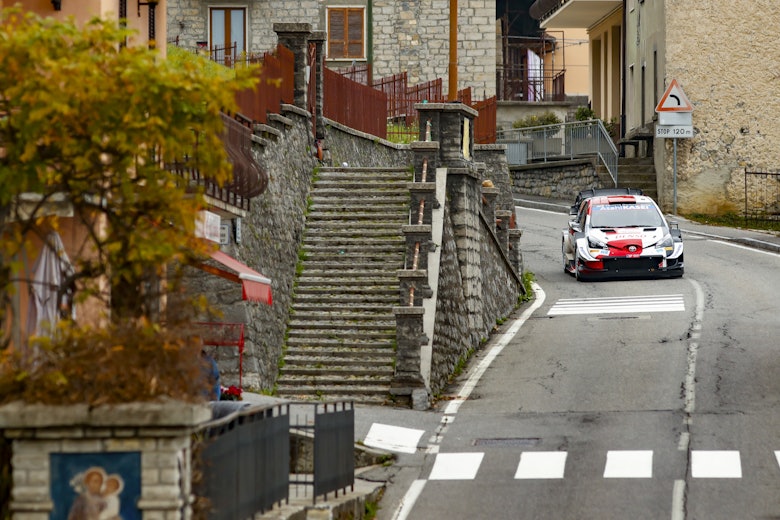 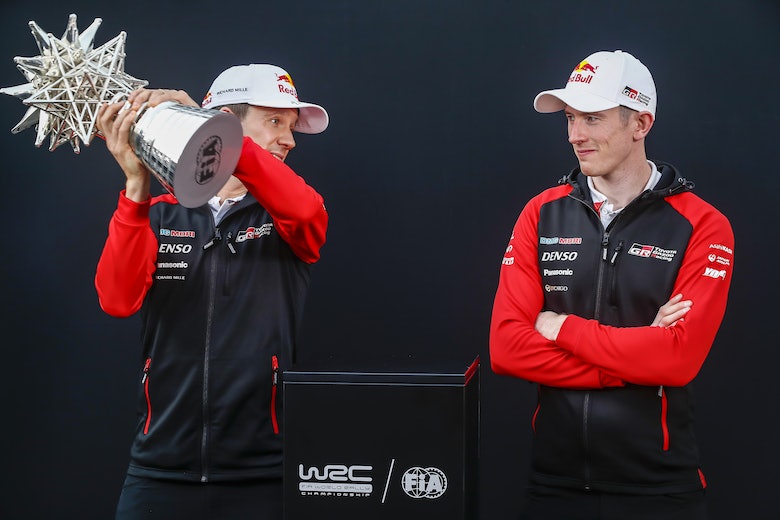 Ogier on title brink as Toyota team-mates toil on SS15