Toyota’s Sébastien Ogier and Elfyn Evans have both told DirtFish they’d rather be leading the world championship standings ahead of next week’s Rally Italy, despite the handicap of running first on the road on the first leg.

Ogier sits just two points ahead of Evans after four rounds. Evans’s victory on last week’s Rally Portugal and third for Ogier would have put the pair level, but Ogier’s third-quickest time on the powerstage to Evans’s fifth earned the seven-time champion those two extra championship points.

While Ogier struggled to sweep the road in Portugal, admitting it wasn’t a “happy weekend for me in the car,” he insists he would still rather have the points on the board even if that puts him at a theoretical disadvantage in Sardinia.

“Of course you never feel very happy to know that another weekend ahead will be probably a bit similar story, opening the road in Sardinia shouldn’t be great,” Ogier told DirtFish.

“But it’s never been my strategy to let points [slide] on the way and often it’s been proved right to collect as much as you can.

“So I think both Elfyn and me have done a very strong start of the season, and it’s a very good result for the team on the manufacturers’ side as well.

“On the driver’s side it’s still a long way, but even if there’s many drives with the road cleaning, I think it’s always better to have the joker in your hand instead of fighting to catch it.”

With the points situation level heading onto the Fafe powerstage last week, there was speculation that neither Ogier nor Evans would want to beat each other on the test as neither had any positions to realistically make up and wouldn’t want to be the road sweeper in Italy.

Ott Tänak played that tactic to perfection two years ago when he slowed at the end of the stage to ensure Ogier would still lead the points heading into the next round. But with no splits allowed to be communicated with a competing crew, he was only able to do that because the stage had been momentarily red-flagged when Kris Meeke retired.

However there were no such games from Evans, who admitted second on the road “is not the worst place to be for Sardinia but for sure it could be better”.

He added: “You have to take the points, you can’t think too much about it. Myself and Seb actually discussed it [before the stage], you never know what’s going to happen it’s so early in the season.

“You can’t start purposefully not scoring points, you never know what’s going to happen and you have to just give everything you can.” 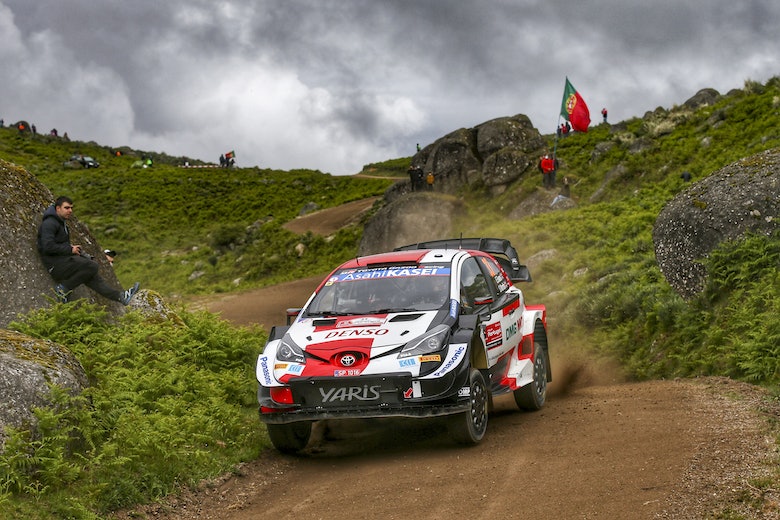 Evans wasn't going to "fall victim" to anyone in Portugal

Ogier has never been a fan of the WRC’s current rules regarding road order, and famously irked a lot of his rivals when he claimed “I know it is a happy day for many people” when he was beaten to victory in Portugal six years ago by Jari-Matti Latvala, largely because of road position.

When it was put to him by DirtFish that he seems to have changed his championship approach since 2017 when he left Volkswagen, Ogier said he feels he has matured and shifted his priorities over the years.

“I was fighting for many years for fairness,” he said.

“I don’t get it, now I’m definitely very close to the end of my career, or much closer to the thought which means I just leave like it is.