Sordo and Lappi – who were tied for position after Thursday’s solitary stage – emerged as the lead contenders as early as the day’s first stage, with Sordo hitting the front first.

But Lappi hit back on the following stage, selecting snow tires as everybody else went with wets and making his advantage count.

The other Rally1 contenders soon followed suit, though, and Lappi’s lead was gradually eroded.

On the 6.4-mile Grand Prix stage that rounded out Friday’s circuit-based leg, Lappi then went against the grain again and opted for wets and it didn’t work. He lost 3.8 seconds to stage winner Sordo to trail by just 1s overall.

It could have been a lot worse, though, as the M-Sport driver struggled to slow down for a chicane and had to head straight on, nudging a haybale instead of a concrete barrier.

“I wanted to save the snow tires to be honest but I’m not convinced anymore that it was the best choice,” said Lappi. “I had a lot of aquaplaning.”

World championship rivals Sébastien Ogier and Evans have been locked close together all day, with Ogier ending the day in third with an advantage of 5.1s over his team-mate. Evans was 1s quicker than Ogier on the day’s final test though.

When asked if he was happy with his day, Evans said: “Within reason. It was very difficult in here now, a lot of aquaplaning.

“[We] just tried to be as fast we could. Inevitably I was overcooking in some areas and just too slow in others so not the perfect stage but at least there have been no mistakes.”

Ogier commented “it was hard to not do mistakes today” and indeed he did make a couple; first on the day’s opening stage when he kissed a haybale and then on SS4 when he overshot a square-right junction.

But staying ahead of his team-mate is key for Ogier’s title bid even if, as it stands, Evans is set to claim his first world crown regardless of what happens on the powerstage. 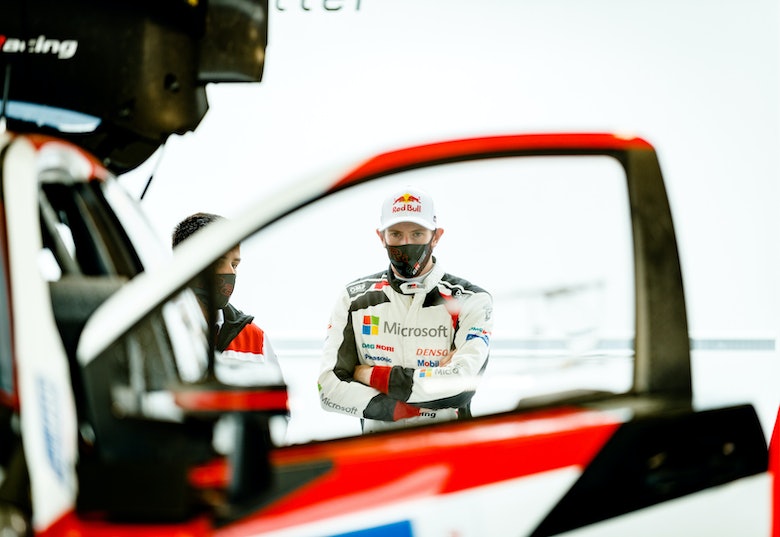 What Evans needs to do to win the WRC title

The likely outgoing World Rally Champion Ott Tänak had a quiet day by his standards, but he is still very much in touch with his world title rivals in fifth, 0.6s behind Evans and 5.7s adrift of Ogier.

Kalle Rovanperä holds sixth, lying 7.1s behind Tänak’s Hyundai and frustrated to have lost time on the day’s second test. That stage proved to be the only one on which Rovanperä failed to score a top-four time on.

WRC3 leader Andreas Mikkelsen starred on Friday to lie seventh overall, 10.1s up on Ole Christian Veiby, who is eighth on his debut in a Rally1 car.

He may be 49.5s adrift of the rest of the pack and 1m14.3s shy of the lead, but he avoided any high drama, which is more than could be said for others.

Thierry Neuville – already a distant player in the title fight before Monza – now looks to be completely out of it after retiring midway through Friday. Neuville began the leg by sliding into a barbed-wire fence in a tricky muddy braking zone, but worse was to come two stages later when he broke a suspension part against a concrete block that formed a chicane.

Ailing through the rest of the test as a consequence, Neuville then drowned the engine of his Hyundai in a watersplash as he wasn’t carrying enough speed.

M-Sport’s Teemu Suninen (pictured below) had a day to forget too as he battled a sick engine as soon as the day got underway. The M-Sport team valiantly tried to cure the issue in the 15-minute flexi services after the stages but the team had to call it quits after SS4.

Gus Greensmith was another to exit the contest, clipping a gate post with the front-right wheel of his Ford Fiesta WRC and retiring on the spot.

That was a relatively similar mistake to the one that put Takamoto Katsuta out of Thursday’s action. Katsuta returned on Friday; the highlight being a second-fastest stage time on the day’s final test, on which he was just 0.2s slower than Sordo.

The fight in WRC2 is finely poised both on the rally and in the championship battle. Adrien Fourmaux dominated the category all through Friday but a puncture on the penultimate stage cost him over 40s.

However, another strong time on the final stage of the day elevated him from third back to second, just 6.8s behind leader Pontus Tidemand. Tidemand will be more focused on Mads Østberg though who is 12.4s behind in third.

Behind WRC3 class leader Mikkelsen, Emil Lindholm is a strong second but has just 1.2s in hand over Oliver Solberg. Jari Huttunen is fourth and in prime position to scoop the title.