What’s your favorite rally car and why? In the latest in our series, we ask some of the rallying and rallycross world’s leading figures about the car which started the passion, what made it so memorable and why it deserves the recognition it got (or not!)

It just had to be, didn’t it? Petter Solberg and the Subaru World Rally Team were a match made in heaven, so let it be no surprise that Mr Hollywood has opted for the famous blue-and-gold machine that powered him to 2003 World Rally Championship glory as his favorite car.

Solberg enjoyed an incredible career at the top of rallying, driving for M-Sport Ford, Subaru and various Citroëns for his own team but he only ever won with Subaru; grabbing 13 rally wins and of course the world title. However Solberg was a trailblazer in the World Rallycross Championship too, winning the inaugural world title in 2014 to become the first pilot to win two different FIA world championship titles, before he repeated the feat a year later in 2015.

And in selecting the Subaru, the Norwegian has followed Johan Kristoffersson and Marcus Grönholm in choosing their title-clinching machines; Kristoffersson picked the Volkswagen Polo Supercar that he took to World RX glory in 2017, ’18 and ’20 and Grönholm went for the Peugeot 206 WRC that he won the World Rally Championship with twice in 2000 and 2002.

The Impreza S9 WRC specifically is Solberg’s winning ride, which he tells DirtFish is “a dream car to drive”. Indeed the car would propel Solberg to four WRC victories (and three further podiums) throughout that triumphant 2003 season in Cyprus, Australia, Corsica and Great Britain.

What springs to mind when you think of the Subaru Impreza S9 WRC?

I remember very well it’s so easy to drive. It’s so compact, good weight distribution, good suspension – it was like a dream car to drive to be honest with you. You can do whatever you want, you can play with it, it was well balanced. The weight distribution was fantastic on it. I’ve driven a lot of cars that are also not so good and when you’re coming into a car that’s right you can do whatever you want and it’s so good fun.

What do you appreciate most about the car?

If I rate one car it has to have good steering feel, the driver should drive and [be able] to feel the grip properly. You need very good suspension and suspension travel to get that feeling that you can go flat out everywhere and you need a good weight distribution.

And of course the engine has to always be good, that is never a question and I will never be happy with power anyway it doesn’t matter which car you are coming to. But it gives you a lot of feeling all the time and when the car is easy to drive you will always be fast on 14 rallies and every stage so you have to think bigger pictures all the time.

What’s the lasting memory of the Impreza S9 WRC?

Of course winning the world championship but I have a lot of good memories with that Subaru. It was a very good team and the passion around the Subaru brand and when you come to Japan, you see the passion from all the people in the factory who actually build the cars and I think all this together it’s like a dream come true. 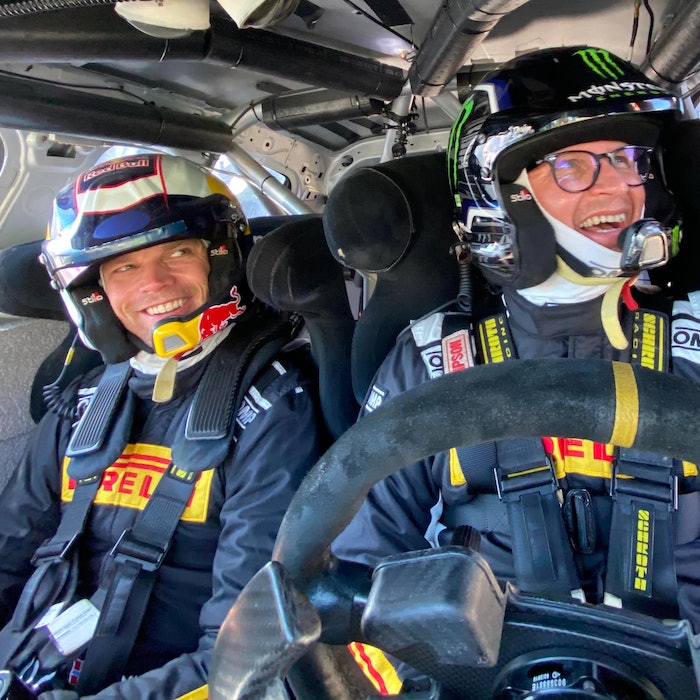 THE WRC SHAKEDOWN SHOWING SOLBERG’S STILL GOT IT

SOLBERG AND ANDREAS MIKKELSEN HAD FUN ON RALLY ITALY SHAKEDOWN, AND WERE QUICK TOO

It’s very difficult to explain when you’re world champion with the manufacturer and the appreciation they have around it when you win, it’s more [special] than just winning and ‘aw it’s fantastic’.

If there’s one thing DirtFish has noticed with this series, it’s that drivers rarely have just one favorite car.

Solberg has three other contenders that he drove throughout his career, and he even briefly shows us two of them via Zoom that are being rebuilt in his Torsby workshop…

For sure I must say the Citroën Xsara WRC is maybe one of the best cars I’ve driven with active differentials. The DS3 that I was double World Rallycross Champion with is also one of my favorite cars and yeah I must say to add one more to it maybe the Polo rallycross car also.

It’s an incredible car to be honest with you, and it’s not that it’s any faster than the DS3 but it’s got so many details on it and much more expensive parts but I like a lot of cars. It’s so many other things that I look at, the driveability I look at and it comes down so much to the steering feel, the suspension and details: how the engineer has built the cars. You know when a car has been built properly, you can see the very small details.

M-Sport gets clearance to travel to Monte Carlo