The entire World Rally Car field continued to adopt the same policy of taking minimal risks to just get themselves to the end of the rally, which is now two stages away following SS22.

Sébastien Ogier’s brief end-of-stage summary – “all OK” – perfectly summed up the sentiment as all the drivers are well spaced out in their respective positions.

The stage battle between Tänak and his Hyundai team-mate Thierry Neuville has been an intriguing – albeit meaningless – subplot on an otherwise sedate Sunday, as both Hyundais shared the fastest time on the two first stages on Sunday.

Neuville won the powerstage dress-rehearsal before regroup, but on the first repeated stage of the day it was Tänak that prospered, although by just 0.2s.

Ogier was close to the pace, just 0.8s off the benchmark, to consolidate his fourth place behind Neuville; outpacing fifth-placed Elfyn Evans by 4.8s.

M-Sport’s Gus Greensmith felt he had a “nice flow” on SS22 as he went 1.9s quicker than Evans’ Toyota.

Second-placed driver Craig Breen was fifth quickest – 0.9s up on Greensmith – and lost another 0.2s to rally leader Rovanperä, whose lead gap stands at 54.4.

Teemu Suninen survived a wayward moment meters towards the end of SS22, but otherwise completed without issue to hold onto sixth place overall.

“The car jumped from the ruts to the inside, but yeah nothing serious happened,” he explained.

The M-Sport driver was again sixth fastest, quicker than Pierre-Louis Loubet who trails him by 1m45s in seventh overall. 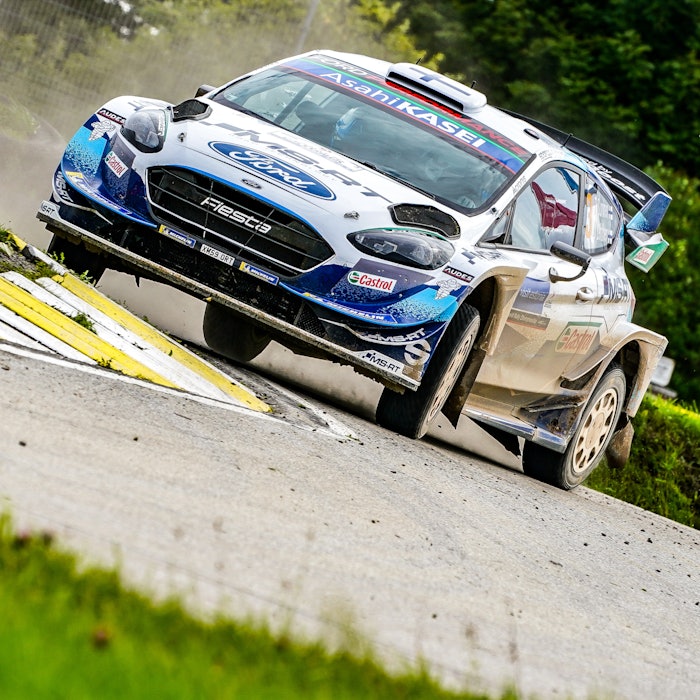 A new stage and a part-gravel, part-rallycross test face crews on the final day

While there’s little at stake for the World Rally Car drivers and indeed eighth-placed Alexey Lukyanuk whose WRC3 lead is commanding, the WRC2 battle is still very much alive.

Andreas Mikkelsen currently leads in ninth place overall to boot, but the pressure is firmly being applied by Mads Østberg just behind him.

Østberg dropped a couple of wheels off the road at the same corner Suninen had his wild moment on SS22, but still managed to outpace Mikkelsen by 2.8s to trim his deficit to just 14.4s.

Third in class is an even tighter contest, however Marco Bulacia made his intentions known with a commanding performance on the third-to-last stage.

Bulacia is disputing the spot with M-Sport’s Adrien Fourmaux, but he won the stage in class to defeat Fourmaux by 4.2s, and subsequently opened up a 6.1s advantage in the process.