There was, of course, a very good reason why Ott Tänak headbutted Esapekka Lappi last week.

The Estonian Hyundai driver was kneeling down and taking a good, long look at the rear wheel arch of Toyota’s GR Yaris Rally1. Lappi spotted his interest and decided to stand in front of his own rear wheel, block the 2019 world champion’s view.

So Tänak headbutted the Finn in his, how should we say this? In his gentleman’s area.

It wasn’t nearly as violent as it sounds. In fact, it was all very amusing.

It was also entirely symptomatic of a bunch of drivers trying to find out why they couldn’t get comfortable in their own cars. And much of the talk was centered on the i20’s angled rear suspension – the thinking being that this could be the reason for the lack of rear-end grip in the car.

If there was a running theme through round eight in Jyväskylä last week, it was the lack of comfort and/or feel at the front of the field.

Starting from the top, Tänak himself was so uncomfortable with the Hyundai i20 N Rally1 beneath him, he was getting out of the car shaking. His team-mate Thierry Neuville retreated to the relative comfort of nine tenths driving, kept his head down, finished fifth and stopped the clocks more than two minutes down on his colleague.

The final Hyundai of Oliver Solberg was in the trees at corner one in the woods, having snapped out of control after just 300 meters on the loose.

It was Toyota that brought perhaps the biggest surprise. Last year’s winner Elfyn Evans was in perfect sync with his Yaris WRC 10 months ago. This time around, he just couldn’t get it dialled in. Same story for championship leader, local hero and odds-on favurite for victory last week, Kalle Rovanperä. The 21-year-old talked through most of the weekend about fighting in the car. You rarely talk of such things from the podium’s top step. 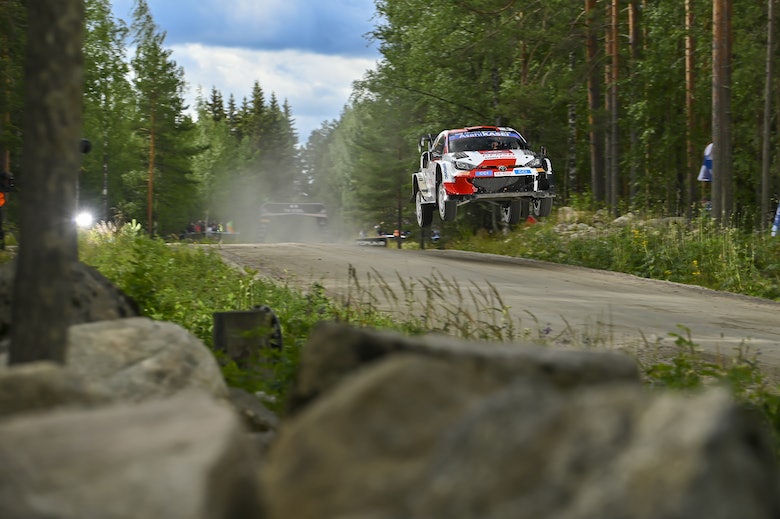 EVANS YET TO FIND SAME FEELING FROM RALLY1 AS WRC

Unless you’re a Tänak on a mission.

Takamoto Katsuta is the most Finnish of Japanese drivers. He lived in central Finland for six years and competed up and down the country’s roads through his period as a development driver. At times, with the new car, he looked a little bit lost.

Esapekka Lappi was the exception. Certainly through day one, he was the nearest thing to the #8 Hyundai. And he was the only Toyota driver who seemed settled on a setup and comfortable in the car.

Arriving into service on the back of three stage wins on Friday night, Lappi was smiling.

“The car,” he told DirtFish, “has been amazing and that just shows why the car is so amazing – that it all comes very naturally, and for the afternoon I could step up with the speed a bit and still it feels. Maybe we could go a bit faster. So yeah, the car is good.”

By Saturday morning, that feel for the car had slipped. Then the car hit the rock which hit the tree which hit the car and smashed the screen. And that was that.

What we do know is that Lappi was the most confident of the Toyota drivers coming out of shakedown.

“I found something…” he told us.

Talking at the end of the Friday, he promised to tell us what he’d found… when he’s retired.

There are no eureka moments in a team like Toyota Gazoo Racing. Setups are all shared and nobody gets to keep secrets. What Lappi found worked for him, but it wasn’t the ultimate solution.

What of M-Sport Ford? The considered thinking around the service park is that Chris Williams’ chassis is arguably the best of the bunch, but the motor’s definitely lacking some pull.

And Craig Breen’s early talk reflected that. Handling wise, the Irishman was in the sweet spot. But what he needed was more horses. Elsewhere at M-Sport, there was significant fluctuation in performance, but the fact that Jari Huttunen could hop aboard one of the British-built Rally1 cars and be near the front demonstrates that comfort and confidence could be found. If you knew where to look.

There’s no doubting the arrival of the new generation of cars had impacted on the feel for drivers – and you’re going to see evidence of that in Finland more than anywhere. The fastest round of the year is run down roads which regularly demand driving some distance from a personal comfort zone. And if you’re not 100% confident in what the car’s going to do 100% of the time, you’re far less likely to hang it all out there.

It was the same back in 2017: faster cars, more tech and enormous aero meant more speed than ever in Finland. It took a while to come to terms with that.

Now there’s even more power (from time to time), but suspension’s more limited and there’s not the same aero grip. Invariably, the drivers were taking more pace, but with less precision. Nobody really likes that.

“I think the lack of comfort is a reflection on a few things combined,” Toyota’s technical director Tom Fowler told DirtFish. “It’s a new regulation car for everybody and, despite what people might think, we haven’t driven our car on these roads very much.

“We first drove it on our own roads in snow, so obviously that’s not relevant to this, and we’ve basically done one test day per driver for Finland. Plus there was a little bit of development work that was done by Juho [Hänninen] over a year ago using a car that was almost completely different to this one.

“We know it’s a rally where a huge amount comes down to being confident with the car, and if you have to drive a little bit underneath 100% you easily lose a few seconds here and there.”

“The question is: if you were going to go and do a world championship, what is the best for the entire championship? That’s always the battle. When you start reducing things, so you have one set of diff ramps, one set of gear ratios, reduce suspension links, then you are trying to make compromises all along.

These cars will doubtless become the fastest ever to grace the World Rally Championship, but, it’s going to take time to strike balance within that compromise.

When that comes, watch them go.

What can we deduce from the first Rally1 WRC debut?