There was a spare seat on Jet2’s flight back from Dalaman to Manchester on Sunday night. Having spent a week in Marmaris among holidaying Brits, Toyota Gazoo Racing took the decision to find its World Rally Championship leader a quieter route home. A route less populated. A route a little more private.

Truth be told, Elfyn Evans wouldn’t have minded his original option. The sizable winners’ trophy – some sort of over-sized Turkish pasta dish – might, however, have looked slightly out of place lodged overhead between the bags of duty free.

The important thing was that the Welshman was heading home on top of the world and as the first driver this season to score two 2020 wins at rallying’s highest level.

Typically, the 31-year-old was an entirely reluctant hero. Driving up and across the finish ramp, he stepped from the victorious Yaris WRC and instinctively looked across at co-driver Scott Martin for guidance on what to do next: arms in the air, do the Vettel one-finger thing, what?

I can’t hide my delight at seeing Evans back on top of the table. It’s nothing to do with the fact that his surname’s a familiar one and everything to do with him being one of the most popular drivers in the service park. He’s not popular in Solberg-style with hordes of adoring fans; he’s popular with the teams, the drivers, co-drivers and the media. His popularity is born out of utter respect for what he’s done and how he’s done it.

And now he has a very real opportunity to close out what would be the biggest of big deals. Predictably, he’s focused on anything but the title. Talking to him soon after the finish and having suffered a mathematical mental blank, I asked him the difference between him and Ogier.

“Er… I’ve got to be honest, I’m not sure,” he said in that slightly flustered fashion that underlines the fact that he’s on the level.

Was Evans the fastest last weekend? No. Was he the best driver? Yes. He stayed out of trouble, gave his car less stress than anybody else and then, when it mattered the most, he came through what will have to be one of the biggest challenges of his career: the second run through the rally’s longest stage.

Sunday’s second shot at the 24-miler was as rough and tough as anything central Greece might have to offer. Tarzan, Thiva or the road from Bauxite to Karoutes, Çetibelde was right up there with the best and the worst of the Acropolis.

It was the first run which had turned the event on its head. We talked a lot on DirtFish about how our expert analyst George Donaldson picked this one out as a rally-wrecker and advised everybody to “drive it like their granny,” but ultimately everybody knew what was coming in SS9.

Waiting at the end of the recce, the crews emerged ashen-faced or red-faced, depending on how many punctures they’d had to change on their recce cars.

It was a nightmare.

It hadn’t, I enquired, been regraded through the winter, then?

“I don’t know what they’ve been doing in there since last year,” said the Estonian, voice trailing away as he was reminded of what was to come.

The number of punctures was quite astonishing for the frontrunners, and DirtFish got the scientific story behind why from Michelin’s rally manager Arnaud Remy (see below).

Pre-event championship leader Sébastien Ogier went (well his tire did) first, followed quickly afterwards by the rally leader Thierry Neuville. The only other man ahead of Evans? Nine-time world champion Sébastien Loeb and he soon suffered the same deflated fate. The sea had parted and the #33 Yaris sailed serenely and sensibly through.

That makes it sound like the lead and subsequent win were put on a plate for Evans. They weren’t. Others had the same chance to sit at the top table and tuck in. But, for one reason or another, they missed the opportunity and ended up fighting over the scraps.

Evans’ approach was faultless. He set his pace and stuck to it. In the coming days here on DirtFish, you can read the thoughts of the man himself on what had to be one of the most anxious moments of his career as he tackled Çetilebli for the second time.

With the first run having claimed Pierre-Louis Loubet and Teemu Suninen with mechanical failures (the Finn’s rather more self-inflicted after he knocked the Fiesta WRC’s left-rear off), with tire issues hitting a further five factory drivers, there were some who predicted similar carnage after an early lunch.

It rarely plays out that way.

Invariably, the cars are running in a higher, more defensive form, there’s less dust about (it’s impossible to overstate how much of a factor the dust was in drivers hitting un-sighted rocks) and the national runners – when they’re included in a separate event, tagged on behind – can act as canon-fodder to clear away some of the bigger boulders without generally having the power and torque to wrench fresh material free and place it in the way.

That said, Çetibeli still had plenty of bite second time around.

It was this second run that really impressed Evans’ boss Tommi Mäkinen.

“Mentally it’s really tough to drive a stage like that,” said the four-time world champion. “It’s very, very difficult to make the speed at the right level; when you’re driving like this, you really don’t have much feeling for where you are in terms of the speed. ‘OK, I’m driving,’ you say to yourself, ‘but should I go fast or should I go slower?’. You’re always asking this question.

“Elfyn was clever enough not to go flat over the most rough places. He saved the tire and still made a good time. He drove so well and especially today. He was so solid, there was no question that he was the master of the final day.

“Like I said, mentally it’s very tough, but he handled himself today.

And British motorsport couldn’t be happier. Especially the hardcore close to Evans’ mid-Wales home. The prospect of an autumn without Gartheiniog echoing to the brilliance of Evans and his mates is offset by the knowledge that their man’s at the very top of his game and sitting on an 18-point advantage with two (or three, or maybe one… who knows?) rounds (or rounds) left.

It was impossible not to feel for Ogier and Neuville, though. Neuville was sensible, self-assured and deserving of a win.

Ogier endured a nightmare weekend of punctures, transmission failures and ultimately an engine that succumbed to the harshest conditions of the season.

The Frenchman’s mood darkened as the weekend passed, but the six-time champion showed true class when he shared a social media post picturing his new plane mates and congratulating Elfyn and Scotty with bottles of champagne and a big smile. Being able to see past your own disappointment and wrap and arm around your nearest championship competitor is the mark of a pretty fine human.

Last week was year three of Turkey’s three-year WRC deal. Will we be back? Doubt it. Certainly not in the short-term, there’s nothing like the millions needed to find a way back on the calendar these days. Has it been a worthwhile exercise? Certainly President Erdogan thought so when he rocked up in year one to hand out the silverware

Last year, he was rumored to be coming along again. But didn’t. This time, his name wasn’t even mentioned. Seems Rally Turkey’s served its purpose.

It’s gone some way to reminding folk that Marmaris offers a holidaying alternative for those in favor of the neon highlights.

Would I be back without a service park to visit? Not a chance. Far too hot and, even in the winter, only a questionable requirement for a pullover. Not for me.

But the stages were for me. Rallying needs that sort of challenge. It needs endurance and the demand to drive with strategy as well as speed; head as well as heavy right foot. Events like this ask questions of everybody; the drivers must pick the fastest, safest line; co-drivers have to read their books in one of motorsport’s most hostile environments with bone-jarring impacts and the car contorted around them.

And then there’s the engineers. They have to deliver a ride capable of having several shades smashed out of it for three days. They need holes for airflow, but not for dust. They need the protection, but not the weight. They need to be fast, but not fragile. 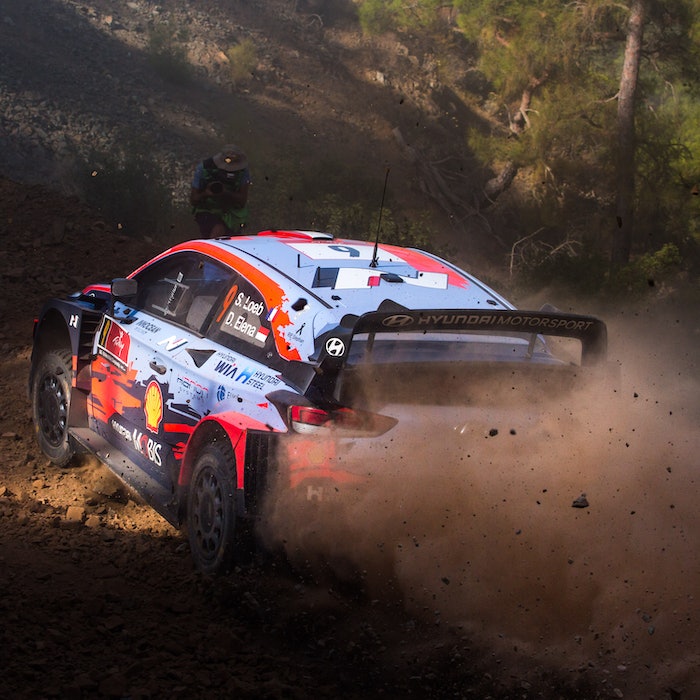 RALLY TURKEY STAGES: BEFORE AND AFTER

For two years, that equation got away from Toyota’s technical director Tom Fowler. Not last week. He and Evans combined to provide redemption for a Yaris which just hasn’t worked (yes, we know Tänak won in 2018, but he won because everybody else retired) in Turkey before.

It was with some glee that Mäkinen talked to DirtFish about how he and his team had metered out revenge for what Hyundai did to them in their Estonian fast-rally backyard a fortnight earlier.

It’s just a shame that M-Sport Ford is struggling to play itself into a place where it can make this a three-way war of words. Right now, Malcolm Wilson’s team is in survival mode. And survival mode makes no provision for luxuries like testing. Short-termism’s well and truly out of fashion in Cumbria – the new now is tomorrow and tomorrow is 2022. That’s the focus. That’s the future.

If MW caught sight of Ogier’s picture of the Frenchman, Evans and Martin, it should be a source of significant pride that he’s put a couple of those boys on the road to greatness, while helping keep the other’s mastery of this world of ours very much on the straight and narrow through 2017 and 2018.

Talking of greatness, and I promise I’ll stop typing in a minute, we can’t say goodnight to Turkey without talking about Loeb’s podium. I’ll investigate this one further later in the week, but Friday night showed the nine-time champion has still got it. Leading at the end of leg one was a very special way for Loeb to show how much he’s missed life aboard an i20 Coupe WRC since January and Monte Carlo.

That’s nothing compared to how much the WRC will miss the big little fella if that really was the end. 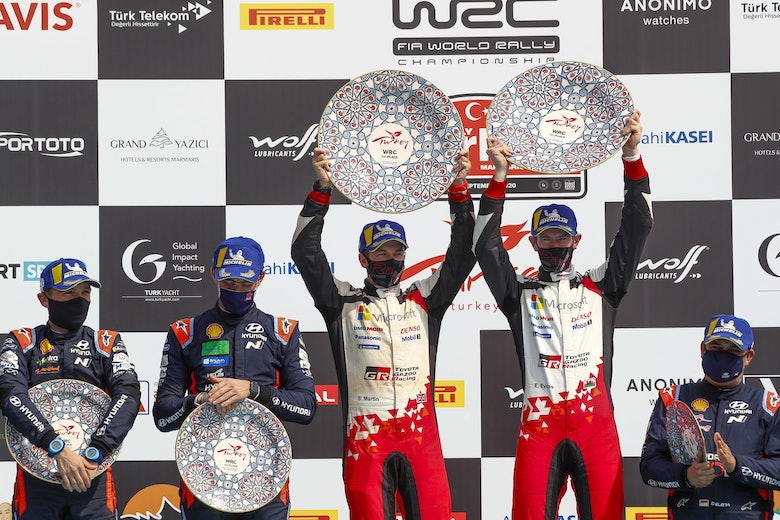 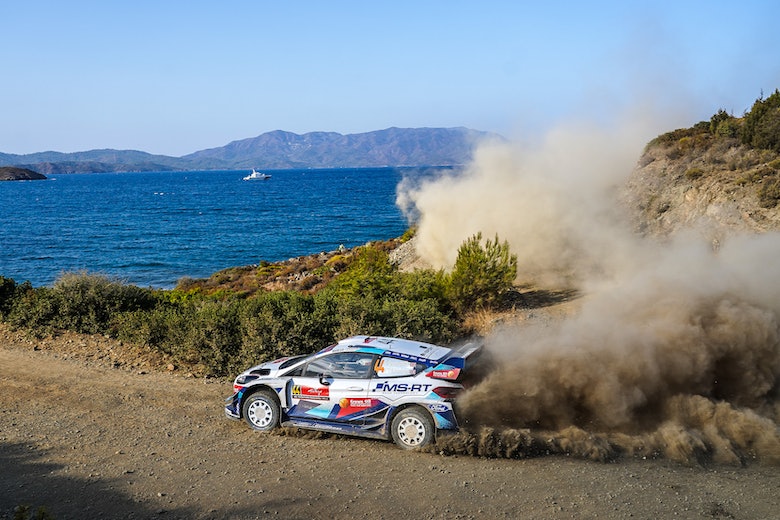 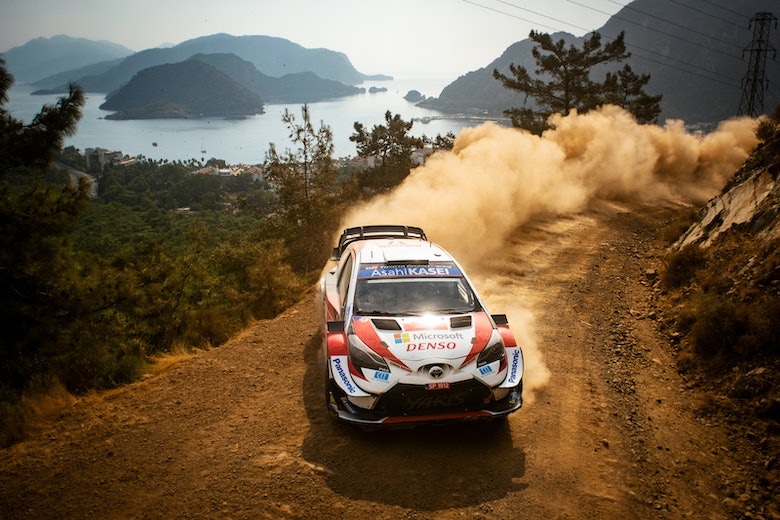