The 28-year-old followed that up with a second-place finish in round eight on Sunday, capping off a strong weekend for the team.

It comes after a difficult start to Hansen’s title defence, with Timmy managing just two third places before last weekend, while Kristoffersson claimed three wins in the first five races.

“It’s been a fantastic weekend with a massive step-up in performance for both me and Kevin,” he said. “We are fighting for wins now which feels great.”

On more than one occasion over the weekend Hansen was able to match the pace of Johan Kristoffersson, who is driving the factory-developed Volkswagen Polo that is by far the most successful machine in category history.

Hansen’s Peugeot 208s, also ex-factory machines, were subject to intensive testing and development in the build-up to the Barcelona weekend, and in beating the Kristoffersson-Volkswagen combination on Saturday Timmy Hansen said he had “beaten the unbeatable”. 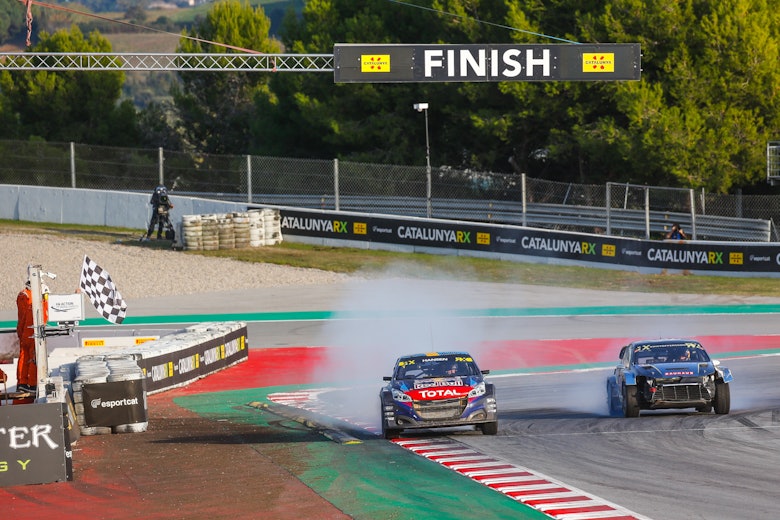 “There has so many times I’ve been chasing Johan since 2017 when they entered with that Polo,” he said. “We have been chasing it as Team Peugeot-Hansen, Peugeot as a factory team, and now as Team Hansen the privateer, so it feels like we’ve beaten the unbeatable.

“This result is a big box tick for me; It’s something I’ve been trying to achieve for a long time, to beat that car and driver combination in a World RX final.”

Kevin Hansen also had a strong weekend, delivering his second podium finish of the weekend, and although he narrowly missed out on a final berth on Sunday, was still positive about the team’s overall improvement on track.

“Overall this was a very strong weekend, a great return to form, and I feel like I’m getting better every weekend,” said the one-time World RX event winner. “For the first time this year, I was within sight of a victory, and I don’t plan to let it out of my sight again for the rest of the year.

“I’m even more excited to be heading to Spa now with the momentum we’ve built here, with the team back to winning ways.”

Hyundai linked with move away from WRC from 2023