Although the Dakar Rally has long been dominated by professional teams and drivers, the traditional amateur elements of adventure, sportsmanship and toil remain as true to this day as it did when Thierry Sabine founded the great rally raid back in 1977.

While much of the media attention was focused on Toyota’s Nasser Al-Attiyah claiming his fourth Dakar victory following Friday’s arrival in Jeddah, just reaching the finish was an achievement for some competitors.

We take a look at some of the lesser-told stories from the 44th edition of the classic endurance race.

Dumas gets a belated Christmas present from rally winner

On the eve of the Dakar Rally, Romain Dumas didn’t know if he was even going to take the start. Like everyone else, he’d travelled all the way over to Saudi Arabia in anticipation of the 44th edition. He had high hopes for his Rebellion buggy alongside navigator Rémi Boulanger.

But during shakedown his team-mate, and team boss, Alexandra Pesci’s car caught fire and was completely destroyed. It ruled out that car and, with Pesci taking Dumas’ vehicle, it looked like the two-time overall Le Mans winner’s Dakar was already over.

Step up Nasser Al-Attiyah, who performed a remarkable act of sportsmanship in donating his 2021 Toyota Hilux from his own personal museum in Qatar. His Toyota team managed to expedite the car to Saudi Arabia in time for Dumas to drive it in the prologue qualifying stage.

Having never driven the car before, Dumas performed admirably, running as high as 31st after two stages, before gearbox issues caused his retirement.

Despite this disappointment, Dumas was thankful to Al-Attiyah’s generosity.

“It started badly, I must say,” Dumas told L’Équipe. “But Nasser, through Mathieu Baumel, told me that they had kept their car from last year. They needed to get it from the museum, it was 11 o’clock here and it arrived on Friday [31st December] morning.

Hydrogen makes its mark on the Dakar

While the Dakar Classic gave a nostalgic tip of the hat to the past, there were plenty of future technologies on show in Saudi Arabia this year.

Hydrogen power played a big role throughout the rally, with GCK Motorsport unveiling its H2 e-Blast prototype car during the official rest day in Riyadh.

The car, which will be driven by the team’s figurehead Guerlain Chicherit in 2024, is just one of several hydrogen projects in progress, with Chichrit’s compatriot Cyril Despres also plotting a hydrogen entry from next year.

In the truck class, hydrogen made its debut in Saudi Arabia, courtesy of Gaussin’s H2 Racing Truck.

The Gaussin brand began its hydrogen journey back in 2012 when it developed the first first heavy-duty hydrogen-powered truck, dedicated to container transportation, and has since gone on to become a partner of the Dakar itself.

Philippe Jacquot was one of the drivers of the #00 truck contesting the event, having received a late call-up in the weeks leading up to the rally.

Alternative energies are also part of a wider move for trucks to step away from combustion power, with Kees Koolen targeting a 2023 participation in a fully electric vehicle.

The same goes for Gerard de Rooy who intends to take his own fully electric truck to the Dakar in 2024, in collaboration with Urban Mobility Systems (UMS) and Allison Transmissions.

“We want to compete to be in the top 10. That’s quite a challenge but it’s the good direction for the whole category and the Dakar. We’re confident we can make a very nice truck for 2023.”

Coronel brothers have an early bath…but get cake!

Dutch siblings Tim and Tom Coronel are Dakar regulars, but their 2022 edition unfortunately did not go according to plan.

At the wheel of a Maxxis DakarTeam Century, Coronel ran inside the top 30 during the opening week but encountered an irate Vaidotas Zala following the first proper stage.

Zala, who lost almost an hour after getting stuck in the dunes following an incident with a car, believed Coronel was to blame for almost coming in contact with the Lithuanian.

It led to an angry confrontation from Zala at the end of the stage, with a bemused Coronel seemingly making Zala’s mood even darker.

As it turned out, Zala had confused Coronel with the real culprit and numerous expletives were exchanged for laughs and jokes when it finally dawned on the X-raid Mini driver that his rival was not who he thought he was.

As a way of apology, Zala subsequently presented both Coronels with a cake back in the bivouac, much to the latter’s enjoyment.

But the siblings would not see the end of the rally, as driver Tim suffered a back injury while negotiating a series of dune ergs on the sixth stage.

“There we made a small jump from a dune and we had to drop the pace a bit, because Tim had hurt his back. We drove quietly after that,” said Tom.

Tim added: “We landed, and I cricked my back. So bad, I couldn’t breathe. It hurt terribly. Fortunately, nothing appears to be torn or broken, and I can now breathe better.”

Vatanen’s 1987 winner the pick of the Dakar Classic

After making its debut last year, the Dakar Classic returned in stronger numbers in 2022. The non-competitive class of the Dakar featured 219 cars, ranging from replicas to reconstructions again proved popular, with one car in particular turning heads around the bivouac.

The car is a reconstruction of the 205 T16 Vatanen and Bruno Berglund took to their first of four Dakar victories – on Peugeot’s debut. It was acquired by former truck competitor Philippe Jacquot and piloted by his son, Rudy.

Speaking to France Télévisions during the opening week, Jacquot Jr reveled in being given responsibility for his childhood dream car.

One of the most popular vehicles on the Dakar Classic this year, check out the iconic Peugeot and hear more about those driving it ⬇️#DakarClassic | #Dakar2022 pic.twitter.com/rqZPRLhWZs

“There is a lot of pressure not to break it, it’s very precious! We try to keep it safe, keep it consistent and we take care of it, alongside my very experienced navigator [William Alcaraz].

“It’s a lot less stressful to be in the Dakar Classic compared to the main category and full throttle all of the time. There’s a lot more brands and cars to compete against, so it’s a nicer experience.”

Alcaraz himself was part of the 1987 Dakar, albeit as a mechanic, and always dreamed of one day sitting in the cars of his era.

“My first Dakar was as a mechanic in ’87,” he said. “This was a car which made you dream about the Dakar when you were younger. But to compete in it is very pleasing.”

Sadly, the Dakar took a tragic turn on the final day of the event, when the team’s chief mechanic Quentin Lavalée passed away following an accident on the liaison route. Lavalée was a mechanic for the PH Sport team which was taking care of the car throughout the fortnight.

Another standout vehicle in the Dakar Classic was the Mitsubishi Pajero MPR51 which Jean-Luc Fontenay drove to third place in the 1996 edition.

The 2.4-liter turbo car, driven this year by Italians Stefano Calzi and Umberto Fiori, was run by the Motor Technica team which also ran five other entries in the category.

“Obviously I am taking care of it very much, not only because I have a great appreciation for the car but also because it would be very difficult to find replacement parts!,” Calzi told French publication AutoHebdo. “It’s a dream come true and it’s fantastic to show this off to the public, isn’t it?”

Now, we don’t usually cover the two-wheeled variety of rallying on DirtFish, but there is always an exception to the rule, in exceptional circumstances.

MotoGP race-winner Danilo Petrucci made his first Dakar appearance aboard a factory KTM in sensational fashion, winning the fifth stage of the event following a speeding penalty for past winner Toby Price.

Petrucci’s journey to the Dakar was eventful, having tested positive for COVID-19 in the lead-up to the rally, before ultimately testing negative and being allowed to compete. A fractured ankle also meant that even before the Italian took the start, he was up against it.

A fuel pump issue caused a massive dent in his overall hopes, but a dream stage victory on the fifth stage, despite suffering a nasty fall at the start of the test – accompanied by a pizza delivery at stage-end from Gazzetto dello Sport journalists – made for an impressive first outing.

Checa suffered a spectacular roll on the third stage, but that didn’t dent his charge as he finished 43rd.

Sanz in a JCW Mini All4 Rally came into the Dakar looking to expand on her limited cross-country experience and a successful Extreme E season last year. She and navigator Maurizio Gerini ended up a creditable 23rd overall, despite a near-miss with a rock which broke the rim of her rear-right wheel on stage 10.

Read more about the latest Dakar on DirtFish 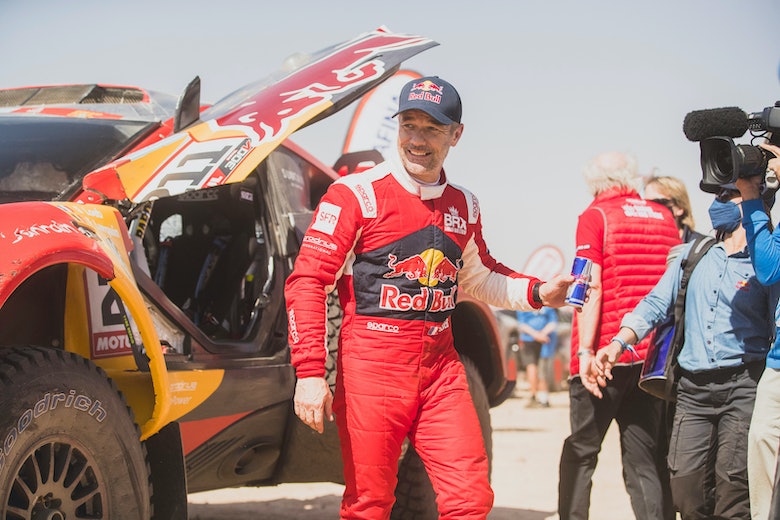 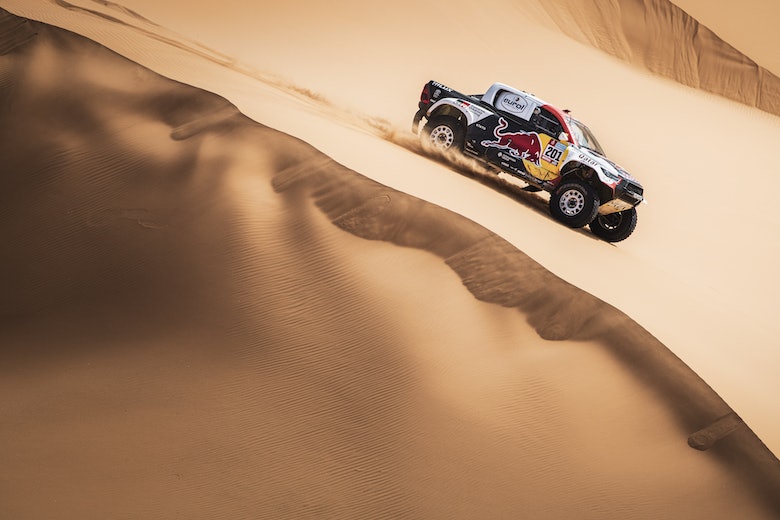 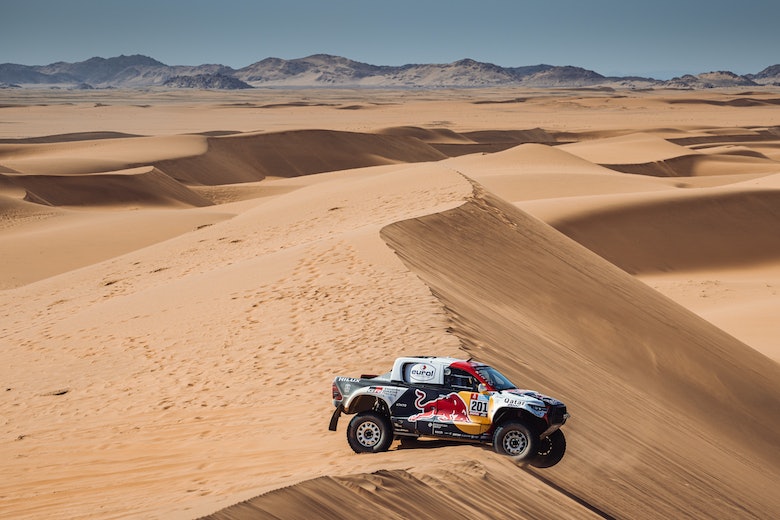 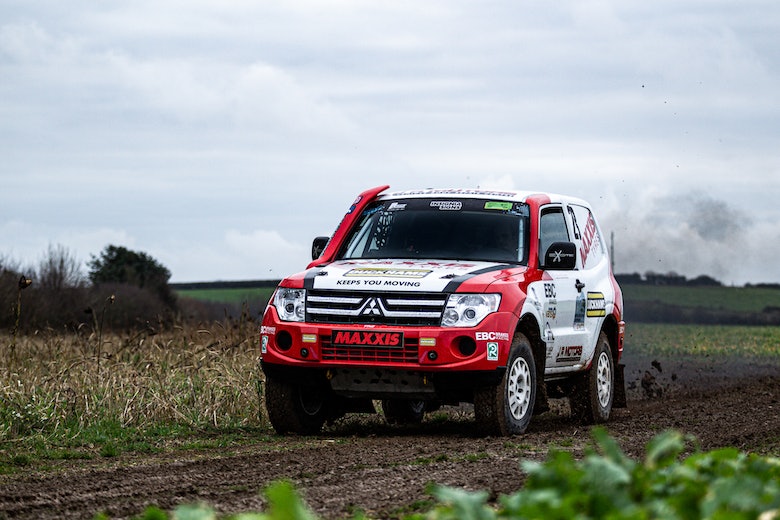 Behind the driven plan to break a Dakar record

When Mäkinen was beaten but still won the Monte