The 2020 Show-Me Rally, run as an American Rally Association National round for the first time, attracted 60 cars to tackle some of the most beautiful gravel and dirt roads in Missouri. As always, a few of those cars stood out among the rest as something either unexpected on a rally stage, or something that is rarely found on one anymore.

One vehicle that stood out was the (appropriately numbered) #302 1988 Ford Mustang driven by Andrew Mozer.

While the Foxbody is known around the racing world as more of an NHRA regular that would be at home on a quarter-mile strip of asphalt rather than 80+ miles of twisting gravel roads, this V8-powered pony car was built for different purpose than what the Ford Motor Co. probably had in mind.

According to Mozer, however, this isn’t quite a one-of-a-kind machine.

“I got it four or five years ago. Growing up Mike Hurst used to run one, and this is the sister car to that car,” said Mozer. “There have been a couple of Foxbodies around. It’s kind of a tough car, it’s probably not perfect for rally, but it’s not too bad… it’s just a cheap fun car”

Mozer has a good amount of work in this car both in upgrades and repairs. He tries to stick with production parts and upgrades from later generation Mustangs to keep costs down, but there has still been times that the car has required a big undertaking.

“It seems like every couple years I’ve had a big problem with it. Initially I had to rebuild the engine before I even took it out, and after that I found some frame issues. It has new shocks, springs. There’s not a whole lot [of modifications],” he said.

“There’s a lot of little tiny things like different bushings in the four-links so it doesn’t bind up. I’m trying to keep as much from changing that I need to, but obviously that stuff constantly changes.”

Though the Mustang is powerful enough to be competitive, with Mozer’s estimating it’s putting ut between 300hp and 350hp, it still needs to be able to make it around all the turns that the trails have to offer, and for that Mozer turns to the SN95 parts bin.

“I have newer control arms in the front, some of the newer SN95 parts in it so it has a wider track in the front, and then you can get more steering angle out of it,” Mozer concludes.

Steve Olana’s recent build was at Show-Me competing in its second ARA event after debuting at Rally Colorado. The Tercel started life as a four-wheel-drive model but was converted to RWD for the sake of rallying. The idea came from a desire for a RWD Toyota, but an inability to afford the ever-present ‘drift-tax’ that comes with buying one.

“I wanted a rear-wheel drive Toyota but they’re very expensive now, uh, ridiculous actually, so building a rally car out of one of those didn’t make much sense,” said Olana.

“This chassis is actually very similar to those cars in the underpinnings. It was already a solid rear axle, it was already an FR layout so it was easy to convert it to rear-wheel-drive and make it somewhat competitive.”

That conversion isn’t the only thing the Tercel has going for it though; the original powerplant has been swapped out for a 3S-GE BEAMS engine which more than doubles the original horsepower to about 200hp at 8,000rpm. It may not sound like much, but Olana makes it work.

The Tercel, especially in a 4WD Wagon form, has become somewhat of a cult classic in the automotive world, and although it shows some rust, Olana’s is relatively clean and straight. One might think it would be a waste to have such a good example out on the stages of the ARA but Olana said it’s not quite what it seems.

“This car was really rusty when I bought it, it was pretty much done for,” he said. “I actually love these cars too, I daily drive one. I also did not want to destroy a nice one because rallying cars, it does destroy them.”

The build is also meant to take advantage of Toyota’s reputation of longevity.

“The whole point of this build was to make it as strong as possible. It’s not the lightest car here but it should finish basically every rally, I hope at least.”

Going in a much different direction than a compact family wagon is Robert Pepper in car #951, a Porsche 944S.

After dabbling in a little bit of road racing with a 944S, Pepper said he knew the direction he wanted to go was rallying. Already having the knowledge of the 944 platform and the parts to go along with it, Pepper decided to just keep going in that direction.

“It was the one car I knew how to work on, and I had lots of spare parts from road racing and whatnot in the basement already,” he said.

One of only two that run in the ARA, the 944 is definitely no stranger to racing, but rare to see at an event like Show-Me. Despite this, the 944 didn’t need much to be ready for the harsh conditions.

“The suspension, it’s all much beefier than stock and has reservoir shocks, that kind of stuff. Not much else [has been changed], the transmission has a limited slip from the factory so that helps us out, saves some money. The tires are stock, the brakes are stock.

“That’s probably one of our real big advantages is we have huge brakes that fit under 15-inch wheels by design from the factory so we don’t need to upgrade.” 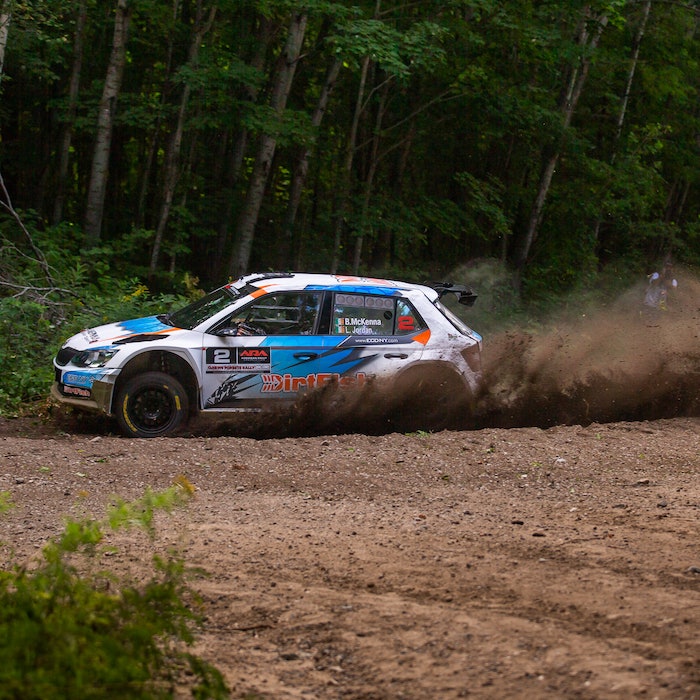 HOW TO CREATE A NEW RALLY IN ONLY THREE WEEKS

Whereas the Porsche has no issues slowing down, it does have a disadvantage when it comes to power according to Pepper, who said while the 2.5-liter engine may have made 185hp 33 years ago, it definitely doesn’t now.

Pepper used to run the more coveted 3.0l engine, but after some blown motors and a bit of trouble with the online 944 community, he has temporarily moved down to the smaller engine.

“They only made 1400 of those engines a year for three years in a row and then they made no more after that, I blew up two and on the forums I got called out and was told to stop blowing up the precious 3.0l engine,” he joked. “The next upgrade is certainly the engine, we’re switching to a Volkswagen Golf engine which is a 2.5l five-cylinder, and we’ll be turbocharging that.”

Despite the motor issues, as well as a few wiring issues that have been sorted out, the 944S works well for Pepper and his team, and with a Porsche Cayenne as his tow vehicle, it’s safe to say he’ll be running the Porsche name for a long time to come.

Another racer who is loyal to his platform is Michael Miller with his Mitsubishi Galant VR-4. Obviously the Galant VR-4 is no stranger to rallying, having competed in the World Rally Championhip’s Group A back in the 1980s and 1990s, but looking around the ARA it’s become a very rare sight in a field of Imprezas and Legacys.

Miller chose the Galant VR-4 when he wanted to get into stage rallying due to its similarities to the platform he was already used to driving in rallycross.

“This is basically a first gen Eclipse, or Laser, or Talon.” said Miller. “After doing rallycross for about four years with [an Eagle Talon] we decided we wanted to do stage. This is a natural progression because trying to put a cage into a first gen is – oh my gosh it’s claustrophobic!

“So we already had all the knowledge about the cars, all the powertrains, all the drivetrains, all the neat little things so it was just really advantageous at that time.”

Miller has made an interesting choice with the car, however. Though all Galant VR-4s came from the factory with a turbo, he decided to take the turbo off and run in the NA4WD class.

This, however is only one thing on the laundry list of upgrades and changes Miller has made.

“Obviously [we’ve upgraded] the suspension, the exhaust, the intake, that’s about it for power modifications. We have the lexan windows, carbon fiber hood and trunk.

“I’ve upgraded the lights which are amazing especially for rallies like this where we have to run in the night, and ducting. Ducting is very important. Then of course required safety equipment.”

Despite a few “teething issues” with the wiring and an expensive blown transmission, the platform has proven to be reliable for Miller, who was racing the 14th rally with this car at Show-Me.

Miller has no specific plans for the future with his Galant VR-4, but does offer up some possibilities.

“Right now we don’t have any plans to change it,” he said. “We can just slap a turbo on it, and we’d then be in L4WD. We might do that, we might move on to another car. I really like this chassis, we really like Mitsubishi in general, so it might just be something we stick with until it gets rolled up into a ball!” 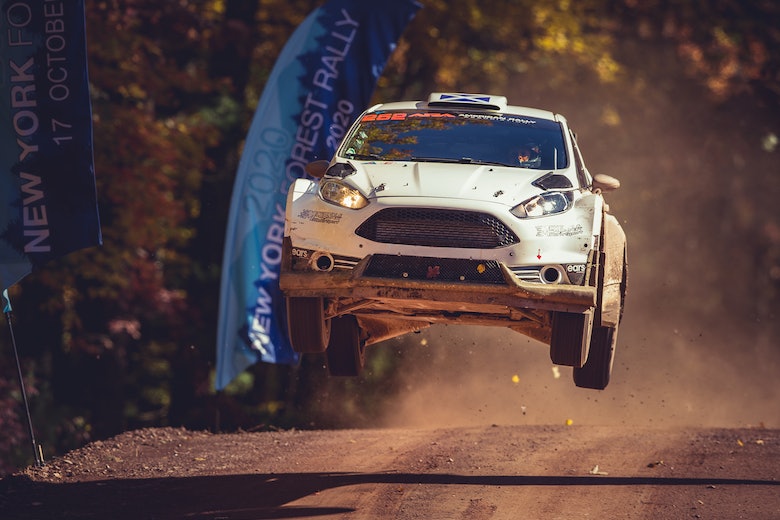 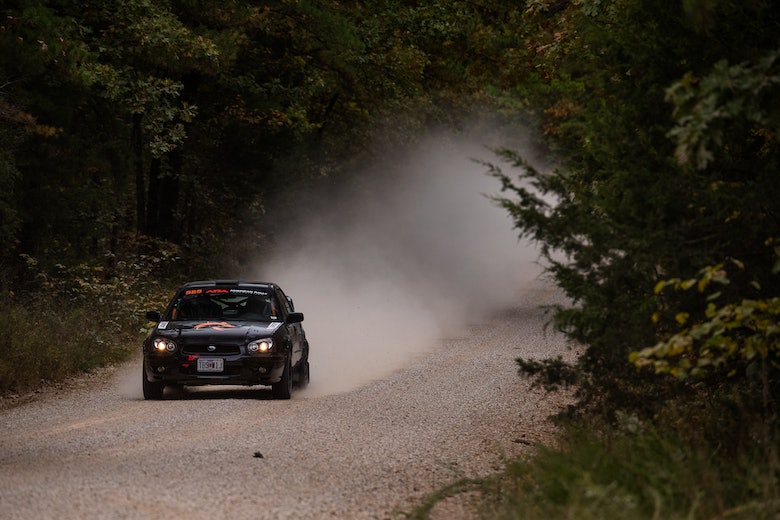 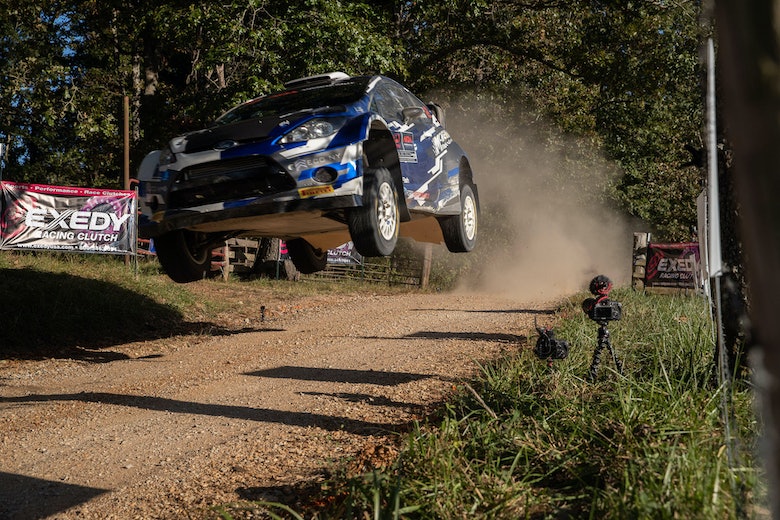