Andreas Mikkelsen stole all the headlines on Rally Hungary, as the former World Rally Championship regular won with relative ease on his first competitive rally in nearly a year.

But beyond the ex-Hyundai factory driver’s star turn, there were some equally impressive performances elsewhere in the field which perhaps didn’t get the same recognition.

On paper Rally Hungary suited Cais down to the ground. His home round of the ERC, Barum Rally Zlín, is his favorite for the very reason most drivers find it so challenging: low-grip, dirty asphalt roads which are often run in fairly miserable weather.

Hungary promised the right ingredients for Cais to cook up a career-best result.

Instead, he was beside himself after chucking his Ford Fiesta Rally2 off the road on Saturday morning’s first stage, dropping almost three minutes and slotting into 40th place.

From there he dropped one minute over the rest of the day compared to rally winner Mikkelsen. While that’s certainly not insignificant, it also would have put him third at the end of Saturday’s stages without his spin.

Cais followed that up by going third-quickest over Sunday’s seven tests, 17.4s slower than Alexey Lukyanuk – whose sole goal at that point was to pick up maximum bonus points for being fastest on Sunday – and 17.8s faster than Mikkelsen.

“I am super happy but I need to apologize to my team, sponsors and family about our mistake on Saturday,” said Cais, acutely aware his early mistake cost him a potential maiden podium.

It’s a shame Zlín didn’t run this year; Oliver Solberg and Gregoire Munster would surely have had extra company at the top end of the Junior class had it gone ahead.

Reigning ERC3 Junior champion Llarena is undertaking his first season of competition in Rally2 machinery this year, driving one of Saintéloc’s Citroën C3 R5s under the Rally Team Spain banner.

That newbie status led to a fairly cautious approach to the first half of his season, picking up some solid points finishes and accruing mileage but not really setting the world on fire.

Rally Fafe Montelongo was a false dawn, looking good for a top-five before a complicated exhaust repair that took too long at end-of-day service on Saturday left him out of the rally.

This time luck came into the equation to deliver a maiden podium. While finishing third involved some good fortune – he’d never have made it there without Lukyanuk being handed a five-minute penalty and Breen’s engine dying – it was the final afternoon that stood out as showing what he was really capable of.

Keen to ensure he didn’t bin the car off early on, Llarena “was doing all the rally at 80%” until the final loop on Sunday. A position ahead was up for grabs from Niki Mayr-Melnhof, but equally Solberg was charging back from punctures which had set him back earlier in the rally.

For Solberg, the incentive to push was clear; the ERC1 Junior title was on the line and overhauling Llarena would ensure Munster didn’t catch and pass him in the points table.

For the first time in 2020, Llarena found an extra gear and used it. A smart call to take a pair of wet tires on the final loop paid dividends, picking off Mayr-Melnhof on Erdőbénye and then clocking the second-fastest time on Telkibánya to fend off Solberg’s advances.

Solberg showed his true pace with a push run on the final stage, Kőkapu, setting the fastest time. But it wasn’t enough. Llarena had gone second-quickest again.

No doubt on the cleaner bits of stage Llarena had an experience advantage; he showed on Fafe Montelongo that asphalt is his natural domain; little surprise given where he comes from. 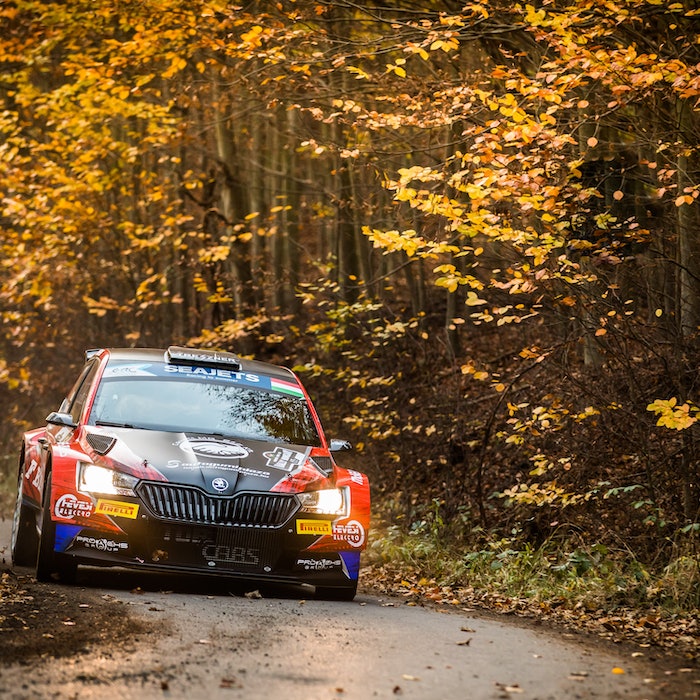 THE NORWEGIAN'S COMPETITION COMEBACK RESULTED IN AN EASY VICTORY

Nonetheless, he mixed tactical nous with an extra dose of speed when it came to crunch time, and got the kind of result he deserved in Portugal but was robbed of.

If he can start doing that more often he could be a future frontrunner.

This result has been a long time coming. A very long time coming. Mayr-Melnhof has shown brief flashes of pace – more so on asphalt – over the last two years in ERC but something has always gone wrong. And usually those things, whether driving mistakes or car trouble, often led to first-day retirements.

Something went wrong this time too; he clipped something solid with his Ford Fiesta Rally2 and knocked the rear out of alignment. But this time he got away with it to an extent; instead of knocking him out of the rally, it cost him over a minute in pace from making the Fiesta a bit of a handful to drive.

Despite all that, he still finished mere seconds away from the podium.

Mayr-Melnhof was downbeat at the finish line of the final stage, having hoped to retake the position he lost from Llarena two stages earlier. Instead, he was passed by Solberg and lost a place.

That last-minute gut-punch doesn’t take away from what was Mayr-Melnhof’s best performance in the ERC to date. Early on he was battling Munster for position, which would have ended up being the battle for second had Mayr-Melnhof’s alignment-related delays not come into play.

ERC3, the two-wheel-drive class, has had two protagonists all season: Ken Torn, perceived as an expert on the slippery stuff, and Pep Bassas, the latest Spanish federation-backed talent who’s rapid on sealed surfaces.

Hungary was both of these things but the contest was not even; Torn, who had two punctures in as many days, had the measure of Bassas.

What wasn’t expected was someone slotting themselves inbetween the pair. But that’s where reigning Romanian Junior champion Maior found himself in the opening exchanges.

By now Torn can be considered a grizzled veteran of sorts in the R2 class. He’s driven all three generations of Fiesta R2 – from the original car in 2016 to the first turbo variant, and then the refined Rally4 edition this year. In all he’s been at this for five years in various championships.

Maior did not have quite the same wealth of experience behind him. He made the switch to R2s at the back end of last year and for this weekend had upgraded from a first-gen 208 to the new-for-2020 Rally4.

Admittedly he did have an experience advantage over Torn, having done Rally Hungary while registered as a national competitor last year. But on stages two and three he was the only driver not shipping more than half a second per kilometer to Torn, settling nicely into second and 13.9s up on Bassas.

That was as good as it got, unfortunately.

A broken driveshaft brought his rally to an early end after SS4 and his pace started to fluctuate a fair bit when he came back under Super Rally the next day. On the Sunday morning pass of Telkibánya he was 1.5s/km off the pace but by the second run in the afternoon, that had gone down to 0.2s/km.

Hopefully he’ll come back and have a crack somewhere else. It’ll be interesting to see how gets on outside of Hungary and Romania.